In an advance that may lead to affordable solar-powered sanitation and water purification for use in remote areas, researchers have demonstrated that shining light on aqueous suspensions of nanoparticles quickly generates copious amounts of steam without boiling the water, bypassing energy-intensive bulk water heating (ACS Nano, DOI: 10.1021/nn304948h). The finding may also lead to increased energy efficiency in electricity generation.

Researchers have known for some years that irradiating solutions of light-absorbing nanoparticles with laser light, for example, causes dramatic heating of the particle surfaces. Much of the work in that area has been devoted to improving the thermal conductivity of the liquids with the aim of developing applications that exploit light-to-heat energy conversion.

In the new study, which was conducted at Rice University, researchers follow a different course. The group, which includes graduate student Oara Neumann and electrical engineering and physics professors Naomi J. Halas and Peter Nordlander, is aiming to capitalize on the energy advantage of light-driven evaporation.

[+]Enlarge
Credit: Jeff Fitlow/Rice University
Rice University’s Neumann (left) and Halas pose next to a test rig that directs sunlight onto an aqueous nanoparticle suspension (in glass portion of apparatus) and rapidly generates steam without boiling the water. 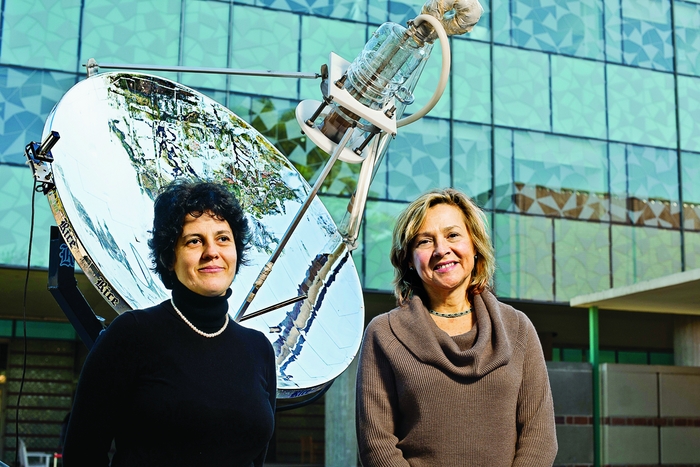 Credit: Jeff Fitlow/Rice University
Rice University’s Neumann (left) and Halas pose next to a test rig that directs sunlight onto an aqueous nanoparticle suspension (in glass portion of apparatus) and rapidly generates steam without boiling the water.

The team prepared aqueous solutions of nanosized particles with silica cores and gold shells and separate solutions of carbon nanoparticles. Both types of particles absorb a broad spectrum of solar light. The solutions were held in transparent tubes and partially immersed in an ice bath in a test apparatus fitted with pressure and temperature sensors.

The researchers report that within five seconds of exposing the core-shell particles to sunlight, the vapor pressure above the solution rose as a result of steam generation. For the carbon nanoparticles, the time delay was roughly 20 seconds. Once the process is under way, steam generation occurs at similar rates for both solutions, they say. In a related demonstration, the team showed that water-ethanol mixtures can be quickly separated via sunlight-driven distillation, resulting in 99% pure ethanol.

Evaporation is stimulated by light absorption, which excites surface electrons and causes a rapid temperature rise in the nanoscale vicinity of the particles, the team explains. The sudden heating envelops the particles in nanosized steam shells that can coalesce to form bubbles, which then move to the liquid-air interface and escape from the liquid.

The group finds that 82% of the absorbed sunlight goes directly to generating steam. They also report an overall sunlight-to-steam energy efficiency of 24% for their unoptimized process.

“This study is unique in that it demonstrates real-life applications utilizing ‘free’ solar energy for something potentially very useful,” says physics professor Alexander Govorov of Ohio University. The advantages of using solar-heated nanoparticles for applications such as distillation should certainly be studied further, he adds.

Comments
P. Raj (November 22, 2012 1:28 AM)
Implication of nanosize should be compared with bluk material.
Reply »

Asanka sandakelum (November 24, 2012 9:10 AM)
Its a very worth research.. can this use for water purification
Reply »

C King (November 26, 2012 10:23 AM)
This sounds like something that would fall under the category of "process intensification" and is certainly worth pursuing. Instead of having a boiler with lots of steel heated surface packed as tubes or plates, here we have a heated surface finely distributed throughout the liquid. And this is a neat fit for a solar boiler as described above.
Reply »

Ahmed Shehata (November 28, 2012 5:47 PM)
If you through a cube of ice in a warm water, a water vapor will evolves at impact. But if the liquid water was cold enough no vapor will appear. My question is, does the nanoparticles used in this study are still efficient when the water is at room temperature.
Reply »

S Niranjan (May 29, 2013 6:39 AM)
You should understand that the nanoparticles will no way heat the existing solution. It just converts water to steam directly dur to formation of nanobubbles. Of course, they nanoparticles are efficient when the water is at room temperature! The essence of nanomaterials is that water can be converted to steam directly without bringing water to its boiling point.
Reply »

Kenrod (December 8, 2012 8:04 PM)
So let me get this straight (I also read the original article). The authors claim that they irrradiate ice water, steam forms at the nanoparticle surface, the steam escapes the nanoparticle and is transferred to the head space above the liquid water WITHOUT EXCHANGING HEAT WITH THE WATER while doing so, thereby creating steam pressure above the still ice cold water?
I predict a retraction and a world of embarrassment for the authors.
Reply »

Ed Berry (February 21, 2015 5:05 PM)
This is my opinion also. Any bubble of steam surrounded by water at <100* will disappear quickly as the gas molecules impinge on the cold water surface. The smaller the bubbles the faster, due to greater surface to volume ratio. If you watch a pot of water on the stove as it comes to a boil, you see bubbles forming at the hot metal surface then rising and shrinking to nothing before reaching the top. Only when the water reaches 100* do they reach the top, and the water comes to a rolling oil. There is a relation between the temperature and pressure of steam, and anything below 100* corresponds to a (partial) vacuum relative to the atmosphere. Particles may catalyze the vaporization/condensation of water, but they could not change the equilibrium.
And as for nanoparticles being very efficient at absorbing light, if you put a little India ink in the water it will absorb 99.9% of the light impinging, and convert it to heat. Since the ink particles are nonvolatile and would remain in the liquid phase, ink could be used for steam generation just as well and at less expense. I don't know if this was a joke or what, but I predict cold steam will go the way of cold fusion.
Reply »

Carlos (February 24, 2013 3:18 AM)
When can we buy this nanoparticle "powder"? Can the nanoparticles be dispersed evenly through the solution?
Reply »

S Niranjan (May 29, 2013 6:41 AM)
You can synthesize it or get it in the market. Yes, the nanoparticles can be dispersed evenly through the solution by using dispersants if necessary followed by ultrasonication
Reply »

Edwin Brussow (March 12, 2013 5:47 AM)
How safe is this method? What are the safety factors, needed to be considered?
And is this solution available? How is it applicable? is it immersed into water, which generates steam, or is the steam a by product of the solutions reaction, to radiation?
How does one determine what quantities are required, for a given application?
Could this concept be used to generate steam, for electricity prodcuction?
Reply »