[+]Enlarge
Credit: Science
Nair holds an ultrathin graphene oxide membrane that selectively filters water but is impermeable to other molecules. 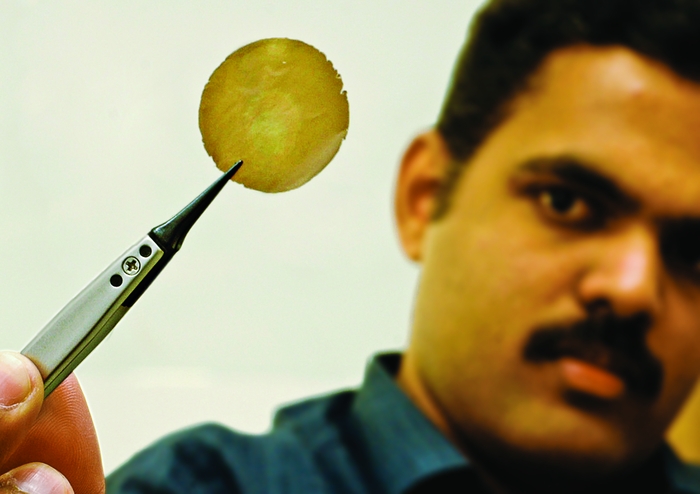 Credit: Science
Nair holds an ultrathin graphene oxide membrane that selectively filters water but is impermeable to other molecules.

Water purification, seawater desalination, gas separations, and chemical filtrations could get a boost from two new carbon-based ultrathin membranes with unique properties: One selectively filters water, and the other selectively filters organic solvents, according to two reports in Science.

“Carbon is among the most abundant elements in the universe, and some of its forms, such as charcoal and diamond, have been known for thousands of years,” observes chemical engineer Donald R. Paul of the University of Texas, Austin, who wrote a commentary accompanying the Science papers. But as the two reports show, he tells C&EN, scientists are still finding new ways to manipulate carbon to create materials with useful function.

For his work on graphenes, which are one-atom-thick sheets of carbon, Geim received the 2010 Nobel Prize in Physics. Now, by stacking graphene oxide, he and coworkers made 0.1- to 10-μm-thick membranes that stop everything except water, which passes through the thinnest membranes almost as if they weren’t there.

The researchers believe increasing humidity causes hydrophilic channels in the interlocked layers to expand, thereby allowing water molecules to make their way through empty spaces where the graphene isn’t oxidized. When humidity decreases, the channels close. The membranes could be used to dehumidify industrial gases or air-conditioning systems, as well as to filter contaminants from water or water from chemicals.

Organic solvents pass through the membranes at rates up to hundreds of liters per square meter per hour—about 1,000 times the rate of flow through commercial polyimide membranes, the researchers find. They note that the flux depends on solvent viscosity, not on solvent molecule size or polarity. Potential applications include chemical and biofuel production, environmental remediation, and food oil extraction.

These membrane materials “are clearly early-stage research and should stimulate further work,” Paul says. “It will be some time before we see actual applications. The real trick will be to make them on a large enough scale, and cheap enough, to be useful in packaged modules.”

Materials
Zeolite membrane finds holey purpose in methanol synthesis
2-D Materials
MXene membranes could be an affordable way to harvest energy from saltwater
Materials
This Liquid Has Holes In It, Thanks To Chemistry
Share X
To send an e-mail to multiple recipients, separate e-mail addresses with a comma, semicolon, or both.
Title: Carbon Crafted Into Membranes
Author: Stephen K. Ritter
Chemical & Engineering News will not share your email address with any other person or company.