A Focus On Manufacturing

[+]Enlarge
Credit: Saul Loeb/Newscom
President Obama delivers his State of the Union address before a joint session of Congress on Jan. 24, as Vice President Joseph Biden (left) and Speaker of the House John Boehner look on. 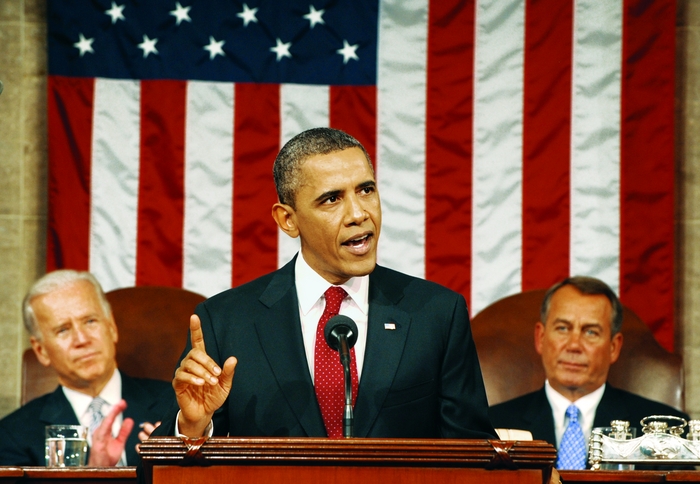 Credit: Saul Loeb/Newscom
President Obama delivers his State of the Union address before a joint session of Congress on Jan. 24, as Vice President Joseph Biden (left) and Speaker of the House John Boehner look on.

Creating U.S. manufacturing jobs is the goal of an array of federal initiatives President Barack Obama laid out on Jan. 24 in the annual State of the Union address. To stimulate employment, Obama called for many domestic manufacturing incentives—corporate tax penalties for moving jobs overseas and credits for keeping them in the U.S., as well as other tax credits to encourage renewable energy manufacturing, educational support, worker training programs, and continued spending for basic research.

Obama’s hour-long speech included more details than his previous State of the Union addresses, as well as a few surprises. Although his hallmark has been development of renewable energy, Obama underscored his backing for oil and natural gas production. He bragged that he is the first president in more than a decade to cut U.S. dependence on foreign oil.

Domestic oil production is at the highest level in eight years, he said, adding that the nation relies less on foreign oil today than at any time in the past 16 years. He credited his Administration for opening millions of acres of federal land for oil exploration and promised to open still more federal territory for offshore oil and gas exploration.

However, more oil drilling alone will not solve America’s energy problems, Obama said, asserting that the U.S. holds only 2% of the world’s oil reserves. “This country needs an all-out, all-of-the-above strategy that develops every available source of American energy. A strategy that’s cleaner, cheaper, and full of new jobs.”

On natural gas, Obama noted that the nation now has enough reserves to last 100 years. “Experts believe this will support more than 600,000 jobs by the end of the decade,” he said.

The flood of natural gas is due to deposits in shale formations extracted through hydraulic fracturing. Also known as fracking, the process uses chemicals that, some claim, pollute groundwater. While Obama applauded the process and the resulting new supply of gas, he pledged to require companies to disclose the chemicals used in fracking—a contentious issue for the companies involved.

“America will develop this resource without putting the health and safety of our citizens at risk,” Obama said.

Obama noted that fracking technology was developed through 30 years of government support and shows the importance of federal aid for energy technologies. Such government assistance to the private sector has been under attack by congressional Republicans.

“Payoffs don’t always come right away,” Obama said. “Some technologies don’t pan out, some companies fail.” The comment was a nod to the congressional investigations of Obama Administration support for renewable energy companies, particularly Solyndra, a failed solar energy company that lost $550 million in a federally backed loan. “I will not walk away from the promise of clean energy,” the President said. “I will not cede the wind or solar or battery industry to China or Germany.”

Obama also urged Congress to continue federal funding for basic research in U.S. laboratories and universities. “Don’t gut these investments,” he said. “Don’t let other countries win the race for the future.”

Several industry groups, including some representing the chemical industry, welcomed Obama’s drive to revive U.S. manufacturing and his support for domestic energy development, particularly natural gas from shale. “It’s a game-changer for the chemistry industry and other manufacturers, who can use more affordable and stable supplies to expand exports and create jobs,” says Calvin M. Dooley, head of the American Chemistry Council, whose members include major U.S. chemical firms.

However, the Society of Chemical Manufacturers & Affiliates, a trade association of batch chemical producers, and other industry organizations were not supportive, saying the Administration’s regulatory, tax, and trade policies will make it difficult to renew U.S. manufacturing capability.

Policy
Trump sets U.S. on new path
Environment
Obama Lays Out His Plans
Environment
Obama Unveils Agenda
Share X
To send an e-mail to multiple recipients, separate e-mail addresses with a comma, semicolon, or both.
Title: A Focus On Manufacturing
Author: Jeff Johnson
Chemical & Engineering News will not share your email address with any other person or company.

Comments
Jay Snow, Marketing Manager, MTI Systems, Inc. (January 31, 2012 8:53 AM)
Creating jobs for manufacturing in the U.S. has many rewards. Not just employment but an increase in manufacturing and growth for the U.S. manufacturers.

MTI Systems recently started a program to help colleges and other educational institutions utilize Costimator, cost estimating, quoting and process planning software as a training tool to be included as part of their manufacturing curriculum. While enabling instructors to focus on cost estimating topics, it also educates students on software used by manufacturers worldwide, effectively helping candidates be better qualified for hire upon graduation -- helping manufacturers be more competitive in their marketplace.