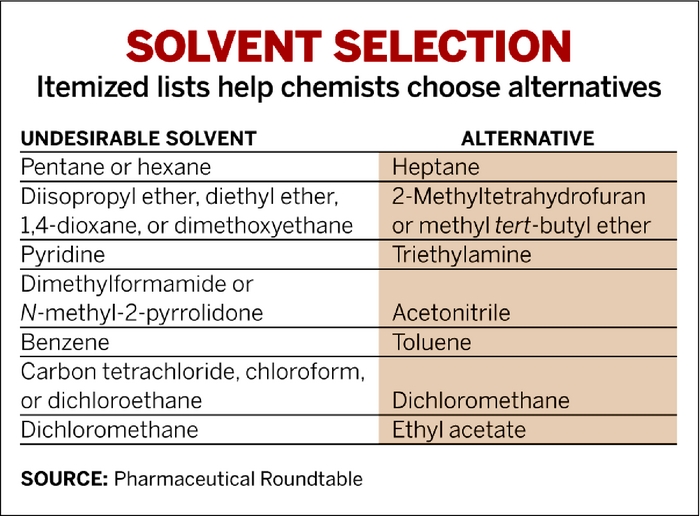 An effort is under way to encourage chemistry journals to adopt editorial policies that steer chemists away from using undesirable solvents and prompt them to include a quantitative measure of the environmental performance of research reported in submitted papers. The American Chemical Society journal (OPR&D) has become the first to adopt the full recommendations of the pharmaceutical industry group spearheading the initiative.

“One of the aims of good process chemistry should be to minimize the amount of waste products in manufacture,” says OPR&D Editor Trevor Laird, who explains the journal’s new policies in an editorial (OPR&D, DOI: 10.1021/op200366y).

OPR&D’s editorial guidelines now state that papers reporting research that involves environmentally problematic solvents, such as benzene, chloroform, and carbon disulfide, will “only be considered if accompanied by an analysis of alternatives or if a convincing justification for such use is presented.” The journal’s editors also warn that authors “risk having papers rejected unless environmental impact and green chemistry principles are considered.”

The journal recommendations originated with the Pharmaceutical Roundtable, a group of process chemists representing global pharmaceutical and fine chemicals companies that is coordinated by the ACS Green Chemistry Institute.

Pfizer chemist Peter J. Dunn, who heads the company’s green chemistry program, is a former cochair of the roundtable and helped develop the journal recommendations. Dunn says he is delighted OPR&D “has taken the bold step of implementing the policies. I hope that in time other chemistry journals, in particular organic chemistry journals, will adopt these policies.”

The roundtable’s recommendations direct authors to assess the environmental impact of the solvents they use and to consider if there are greener alternatives that could have been used instead. As a decision-making aid, the roundtable separately developed its Solvent Selection Guide, which rates the safety, health, and environmental characteristics of more than 60 solvents.

The group also recommends that journals encourage authors to provide performance metrics based on green chemistry principles. The data would allow other scientists to evaluate the environmental impact of the described chemistry. From among a handful of popular green chemistry metrics, the roundtable endorses the mass-intensity index, a measure of the total mass of materials used per mass of product generated (OPR&D, DOI: 10.1021/op200097d).

The Pharmaceutical Roundtable introduced its journal policy recommendations in June 2009 in a meeting with members of the editorial advisory boards of OPR&D and the ACS journals Environmental Science & Technology and the Journal of the American Chemical Society, the Royal Society of Chemistry journals Green Chemistry and Chemical Communications, the John Wiley & Sons journal ChemSusChem, and the Taylor & Francis journal Green Chemistry Letters & Reviews.

Besides OPR&D, few journals have moved toward adopting the recommendations, Dunn says. Green Chemistry and Green Chemistry Letters & Reviews already had green principles built into their author guidelines, Dunn notes. But after the June 2009 meeting, in January 2010, Green Chemistry added language instructing authors to consider the environmental impact of solvent use.

“Journals are under a lot of pressure to improve their impact factors, so they are nervous about the idea of turning down a potentially high-profile paper for any reason,” Dunn says. It’s a situation he says he understands. Dunn adds that some scientists also think it’s important to maintain their scientific freedom, “and hence they don’t agree with any policy that restricts or inhibits them.”

Being an industry-based journal, it’s important for OPR&D to promote green chemistry principles, Laird says. Even so, not everyone on OPR&D’s editorial advisory board agreed with the journal’s decision, he notes. But in adopting the new policies, he hopes to encourage chemists to become more aware of alternatives and to start changing chemists’ minds.