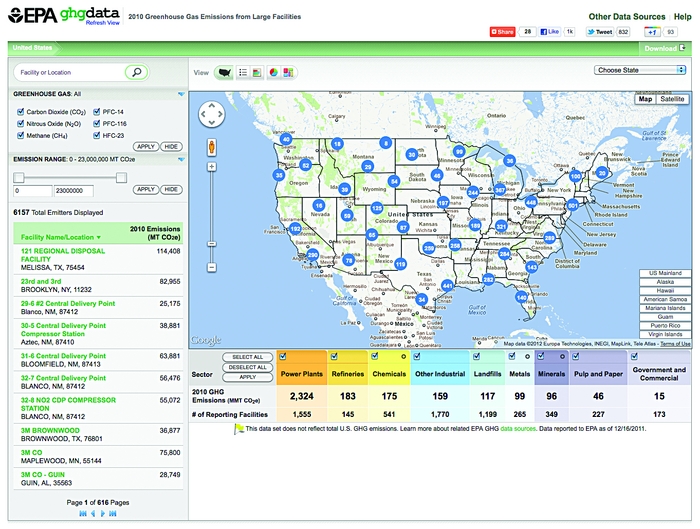 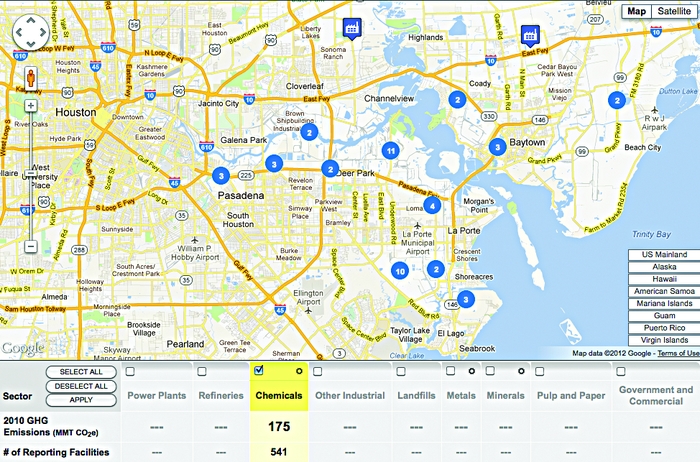 The name, location, and greenhouse gas emissions of some 6,700 power plants, chemical companies, refineries, and other U.S. facilities are identified in EPA’s new reporting program. With a click of a mouse, users can drill down from national data to specific plants in their own state, town, or neighborhood. Shown on right is a breakdown of plants in the Houston Ship Channel area.

A new interactive tool from the Environmental Protection Agency gives the public the ability to analyze greenhouse gas emissions from more than 6,700 power plants, chemical plants, refineries, and other facilities. Rolled out in a briefing on Jan. 11, the Web-based tool enables searches of greenhouse gas emitters by facility, type of factory, amount and type of greenhouse gas, facility location, plant name, and other alternatives, explained Gina McCarthy, assistant administrator for EPA’s Office of Air & Radiation, which developed the tool (ghgdata.epa.gov).

The data are derived from company-provided information, and the tool is modeled on EPA’s Toxics Release Inventory (TRI), in which thousands of companies report their annual emissions to air, land, and water of more than 650 toxic chemicals. This greenhouse gas self-reporting scheme was mandated by a 2008 appropriations law, and EPA started developing the program in October 2009. The data are for calendar year 2010.

McCarthy hopes the greenhouse gas information, like the TRI system, will educate communities as well as power plant and factory owners and operators about their emissions and encourage reductions. She noted that the reporting requirement covers only the largest greenhouse gas emitters—those that generate at least 25,000 metric tons of carbon dioxide equivalent emissions annually. For comparison, McCarthy said that this threshold level is the same amount of carbon dioxide generated from burning 131 railcars of coal.

“This is the first time ever facility-level greenhouse gas emissions data is publicly available,” McCarthy continued. At the briefing, she laid out a list of potential users of this tool, which include states trying to develop emission control policies, financiers assessing future investment choices, neighborhoods wanting to determine the level of emissions from nearby factories, and businesses attempting to gauge success of emissions reduction efforts or trying to track their own emissions levels relative to those of competitors.

The tool works like this: The data appear on a map of the U.S. with blue dots showing the number of facilities in a regional geographic area. The facilities can be limited by type—such as power plants, chemical facilities, refineries, and landfills. The user can then click on the dot and drill down by location, each time filtering the identified facilities and closing in on a specific facility’s location on the map. Eventually, specific streets and addresses emerge, and clicking on the facility reveals the name, address, and specific greenhouse gas emissions levels of a particular plant.

The tool also lets users manipulate and present the data in many different ways including by industry sector and location.

Mining the data shows that CO2 accounted for the largest share of direct greenhouse gas emissions from all sources with 95%, followed by methane with 4%, and nitrous oxide and fluorinated gases accounting for the remaining 1%.

Looking at the very top emitters, EPA found some 100 facilities that each reported emissions of more than 7 million MTCO2e. These were 96 power plants, two iron and steel mills, and two refineries.

SLICE AND DICE
[+]Enlarge
Credit: EPA
Data can be compared, ranked, and rearranged by nine industrial sectors. Shown are emissions for all U.S. greenhouse gases by sector. 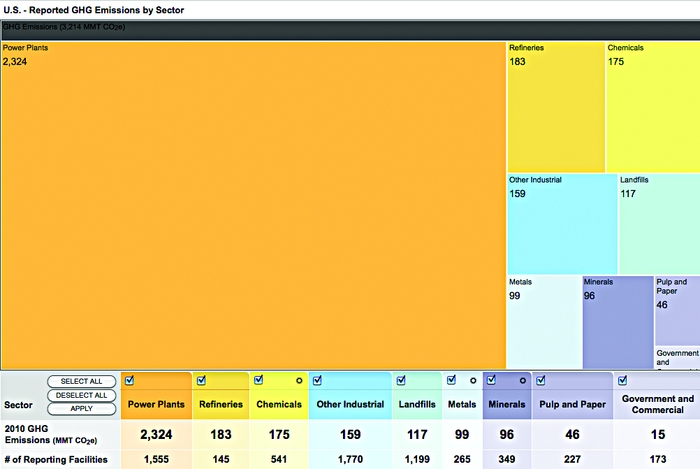 Credit: EPA
Data can be compared, ranked, and rearranged by nine industrial sectors. Shown are emissions for all U.S. greenhouse gases by sector.

The facility-specific emissions are derived from a combination of direct measurements and assumptions based on the plant’s fuel and operations. For larger facilities, such as some coal-fired power plants, EPA already receives direct monitoring emissions data under other programs so direct measurements were used to generate greenhouse gas emissions numbers, EPA officials said.

In other cases, emissions are calculated. For example, the relationship between the carbon content of fossil fuel consumed and the CO2 emitted from the combustion of a given amount of fuel is well-known, noted EPA officials. In these cases, facilities measure the quantity of fuel they consumed and use emissions factors developed by EPA to determine the greenhouse gas emissions from the combustion of that fuel. In some cases, facilities will measure the carbon content of their fuel to yield more accurate results. Once the facility has collected all appropriate data, they are electronically submitted to EPA.

McCarthy said EPA asked some 2,000 companies to double- check data quality. Overall, she said, industry did a good job and even helped flag inaccurate reporting. “There were a lot of corrections as a result of EPA follow-up, and there continue to be corrections. But we are very proud of the accuracy of first-year reporting. We think industry has participated in a positive way. The mistakes have been legitimate.”

She added that the agency intends to refine and upgrade the reporting tool. Data for 2011, which EPA will start collecting next month, will also be incorporated.

“We hope the information will grow to become a strong driver for greenhouse gas reductions,” McCarthy continued. In fact, this data tool is the U.S.’s only national program to encourage reductions in greenhouse gas emissions from stationary sources.