A Revival For Biocides 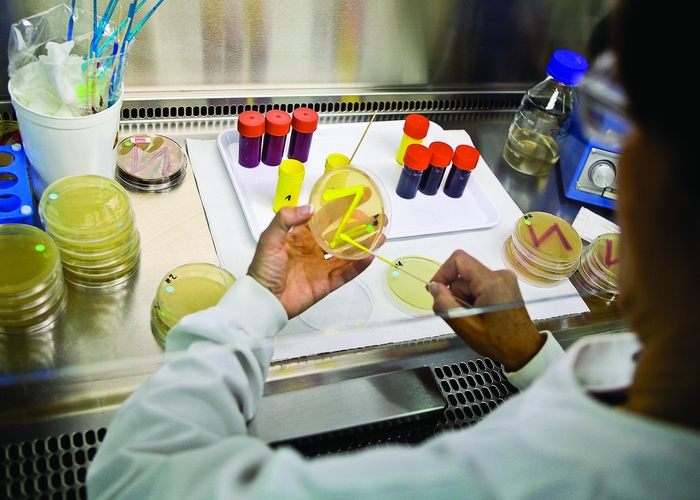 Credit: Dow Chemical
A scientist screens biocides for efficacy at a Dow lab in Buchs, Switzerland.

Biocides protect products and their users from microbial attack, but changes in how products are made have reduced biocides’ effectiveness. Because manufacturers have shifted from solvent-thinned to plant-based, waterborne paints and other goods, they are encountering new challenges in controlling organisms that can destroy products or cause irritation and disease.

“The move to more sustainable products has led to the emergence of difficult-to-control wild strains of microorganisms” in a host of products including cosmetics, paints, and dishwashing liquids, says Rick Strittmatter, global R&D director for Dow Chemical’s microbial control business. “We could solve the problem by adding more of the currently available biocides,” he points out, but environmental, regulatory, and toxicity concerns get in the way.

The increasing influence of sustainability standards organizations such as Ecocert, Blue Angel, and Nordic Ecolabel has also limited the number of acceptable biocides, Strittmatter says. Although they are approved by government regulators, biocides such as parabens and formaldehyde donors, both of which pose human toxicity concerns, are frowned upon by standards agencies. Manufacturers and consumers look for certification labels from the standards agencies, and when they don’t see them they might look elsewhere, Strittmatter suggests.

To cope with these conditions, specialty chemical makers have adopted a number of strategies to provide cost-effective biocides. Their approaches include the development of new molecules, blending existing biocides, and encapsulation systems that dispense the preservatives as needed.

For its part, Dow recently launched a new molecule, 2-methyl-1,2-benzisothiazol-3(2H)-one (MBIT), that it says is more available in the water phase than competing biocides, allowing its use at low concentrations. MBIT is a close relative of the widely used biocide 1,2-benzisothiazol-3(2H)-one (BIT), but the addition of a methyl group “profoundly broadens” its spectrum of activity, Strittmatter says.

The new biocide is available in several Asian countries. Following regulatory approval, MBIT is expected to be available in the U.S. at the end of this year and in Europe by 2014, Strittmatter says. Initial markets include paints, coatings, metalworking fluids, and adhesives, but it could find its way into household products and other areas.

“It’s been quite some time since a major new active came into the marketplace,” Strittmatter points out. Typically, an investment of about five years and up to $10 million is required to get a new biocide approved by governments for use around the world, he notes.

That’s a large sum of money for an ingredient that often makes up less than 1% of a product by volume. Biocide Information, an Ireland-based consulting firm, estimates the size of the global biocide market for paints, coatings, cosmetics, construction products, and other materials at a little more than $3 billion annually. Niall D’Arcy, a project manager at the firm, sees an opportunity ahead for biocide makers able to bring out new biocides that are both cost-effective and more environmentally friendly.

To keep testing and registration costs under control, companies will often evaluate biocides that are used in other applications such as crop protection, explains Karen Winkowski, senior industrial biocides technical director at specialty chemical maker Ashland, which acquired International Specialty Products (ISP), including its biocide business, last year. Costs then can range from a few hundred thousand dollars to a few million dollars depending on the age of the existing data and any additional testing required.

Another strategy biocide makers use to control costs is to develop unique blends of already approved biocides. Such combinations can increase their effectiveness at lower concentrations than would be possible if the individual ingredients were used alone.

“This is the most economical approach, but testing of the formulation is still required and costs are typically in the $100,000 to $200,000 range,” Winkowski says. Such products include Ashland’s Nuosept BIC, a water-based biocide containing BIT, iodopropynyl butylcarbamate (IPBC), and chloromethylisothiazolinone.

U.S.-based biocide specialist Troy Corp. has found that the cost of qualifying brand-new biocide molecules is just too high to make a profit. “In the future, we’ll be looking for more synergistic combinations of molecules in our existing portfolio of synthetics,” says Klaus Nussbaum, the firm’s global head of home and personal care.

Within the personal care market, Nussbaum says, consumers tend to perceive natural substances as safer and purer. But whether preservatives are natural or synthetic, “all preservative actives must be toxic to microorganisms to be effective.”

He points out that some botanical extracts and essential oils can act as antimicrobials. But they have odor, color, and stability problems and are expensive to test and register with regulatory authorities. In addition they are quite expensive compared with synthetics and generally not as effective.

Experts at other firms agree that most natural biocides aren’t yet ready for prime time. “There are natural products with biocidal activity, but none are commercially viable at this time,” says Mark Kenline, material protection sales and marketing director at Lonza, which recently bought Arch Chemicals and its biocide business. “Our innovation group is working on many new biocide product opportunities, and natural products are included.”

One natural product that is moving toward commercialization is a biocide called ProteCoat from Austin, Texas-based start-up Reactive Surfaces. Originally developed as a pharmaceutical but never approved, ProteCoat is a seven-amino acid peptide that is under development for use in paint film to kill bacteria, fungi, and algae.

Steve McDaniel, chief innovation officer at Reactive Surfaces, says the peptide “is passing preliminary tests with flying colors.” However, he doesn’t expect that ProteCoat and similar bioinspired molecules that the company is working on will reach the market until early 2013.

Other alternative biocide approaches include microencapsulation. Biocide Information’s D’Arcy calls these systems, which slowly release biocides and minimize environmental discharge of unused compounds, a growth opportunity for biocide makers. At a waterborne-paint symposium in New Orleans last year, ISP, then still independent of Ashland, revealed such a system (C&EN, June 6, 2011, page 26). Based on IPBC and sold as Fungitrol 940CR, it protects dry paint film.

A few months ago, Thor Group, an England-based maker of biocides, revealed a controlled-release system it calls Advanced Micro Matrix Embedding (AMME) technology. A spokesman says Thor is using the technology to customize blends of approved biocides to protect interior and exterior coatings, adhesives, fillers, and sealants from fungal, mold, and algal growth.

Although environmental and toxicity concerns can limit the number of available biocides, specialty chemical companies are doing their best to increase choices for users. As Dow’s Strittmatter sees it, “Biocides are ripe for innovation and growth.”

Microbiome
Can bacteria clean your counter?
Business
Evonik to buy preservatives maker
Consumer Products
Restrictions on cosmetic preservatives ramp up
Share X
To send an e-mail to multiple recipients, separate e-mail addresses with a comma, semicolon, or both.
Title: A Revival For Biocides
Author: Marc S. Reisch
Chemical & Engineering News will not share your email address with any other person or company.

Comments
Joe Schultz (January 30, 2012 8:15 AM)
Interesting how D'Arcy predicts a market for an "environmentally friendly" molecule that is specifically designed to KILL living organisms!
Reply »