[+]Enlarge
Credit: U.S. Army
Workers move the last two containers of lewisite at the Deseret Chemical Depot into an incinerator for destruction earlier this month. 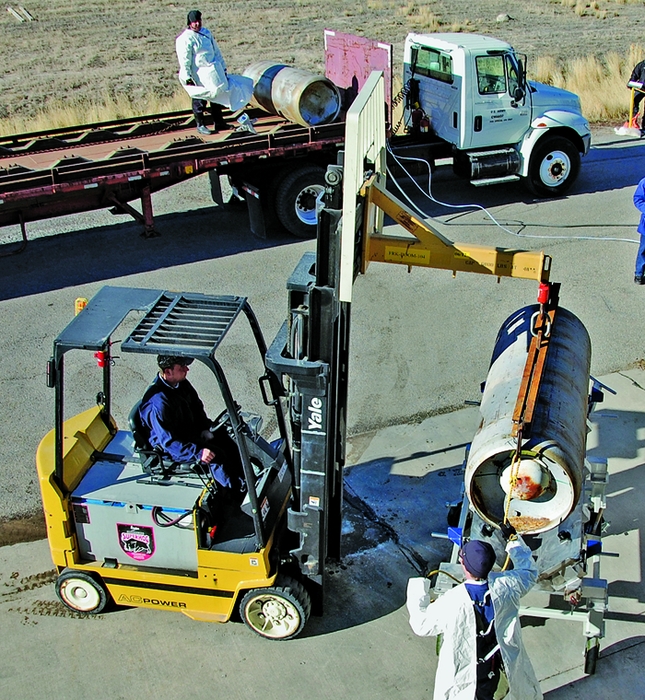 Credit: U.S. Army
Workers move the last two containers of lewisite at the Deseret Chemical Depot into an incinerator for destruction earlier this month.

The U.S. has now eliminated 90% of its massive arsenal of Cold War-era chemical weapons. The milestone was achieved on Jan. 21 after the Army destroyed the last remnants of what was once the largest single stockpile of chemical warfare materials in the U.S. The weapons, which made up 44% of the total U.S. stockpile, had been stored for decades at the Deseret Chemical Depot, a military installation located 60 miles southwest of Salt Lake City, Utah. Ted Ryba, site project manager, says that since 1996 “we have destroyed more than 1.1 million munitions containing more than 13,600 tons of chemical agents.” Overall, the U.S. has destroyed more than 2.2 million chemical munitions and bulk containers holding nearly 27,500 tons of nerve and blister agents, according to the Army’s Chemical Materials Agency. The Army previously eliminated stockpiles at Johnston Island in the Pacific; Aberdeen, Md.; Newport, Ind.; Umatilla, Ore.; Anniston, Ala.; and Pine Bluff, Ark. The remaining 10% of the U.S. chemical weapons arsenal is stored at depots in Pueblo, Colo., and the Blue Grass Army Depot in Kentucky. Disposal facilities at those sites are currently under construction, and disarmament operations are not expected to be complete until 2021.