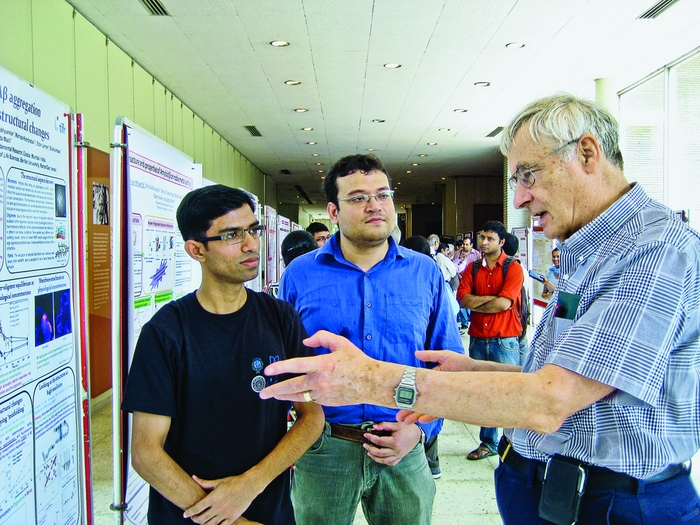 Credit: Anirban Mahapatra
Stang (right) speaks with researchers during a poster session at the Tata Institute of Fundamental Research.

Editors from a dozen American Chemical Society journals traveled to India from Sept. 30 to Oct. 13 to develop closer ties with Indian researchers working in chemistry and allied sciences. During the “ACS & India: Partners in Progress” trip, the ACS delegation visited 13 institutions in seven cities and met with more than 3,000 scientists and students to discuss publication of research in ACS journals and other areas of potential partnership.

In 2011 alone, ACS journals published more than 1,000 articles from laboratories in India. Manuscript submissions from Indian institutions have grown faster than submissions from many other countries, commensurate with the scale of India’s investment in science and technology. 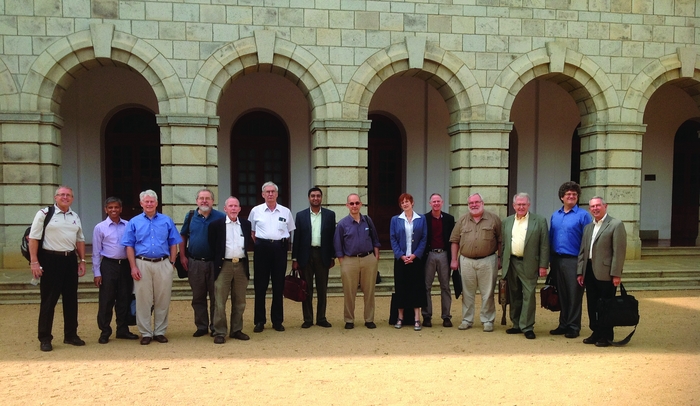 “It was valuable to meet our colleagues at these institutions in person and to see the equipment and working conditions firsthand,” says Peter J. Stang, editor-in-chief of the Journal of the American Chemical Society. “This gave us a very good idea of where chemistry currently is in India.”

“I am continually impressed with the level of science in India,” says Robin D. Rogers, editor-in-chief of Crystal Growth & Design. “You really need to go and experience the science in the context of the culture of India in order to develop a strong appreciation of the people and what they are accomplishing there.”

Rahul Banerjee, a scientist at NCL in Pune, says the huge show of enthusiasm and participation by students and scientists during the ACS editors’ visit points to ACS’s strong impact in the Indian scientific community.

The value of the outreach effort extends beyond ACS Publications, notes Anirban Mahapatra, assistant director for editorial development of biological chemistry in the ACS Journals Publishing Group, who accompanied the delegation. “For many junior researchers, this represented the first time that they had interacted with anyone from ACS,” he said.

Announcements of ACS news may be sent to acsnews.cen@acs.org