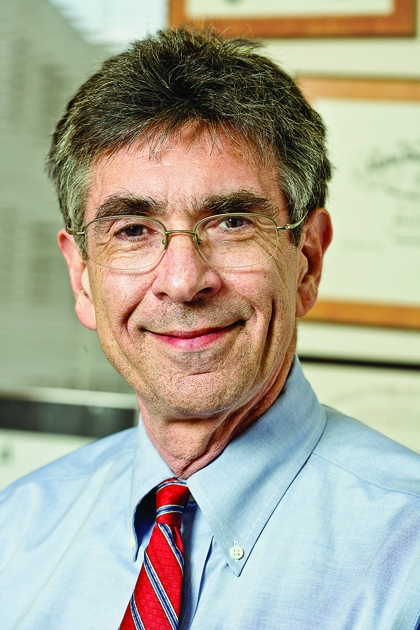 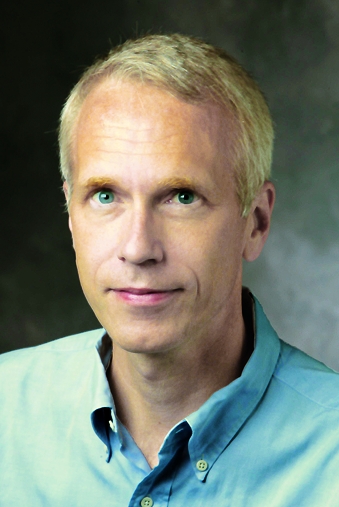 Credit: Stanford U
Kobilka
[+]Enlarge
Credit: Nature
An X-ray crystal structure depicts a β adrenergic receptor (green) with its G protein (yellow, blue, and aqua). The complex is stabilized by a llama antibody (red) and the enzyme T4 lysozyme (purple). 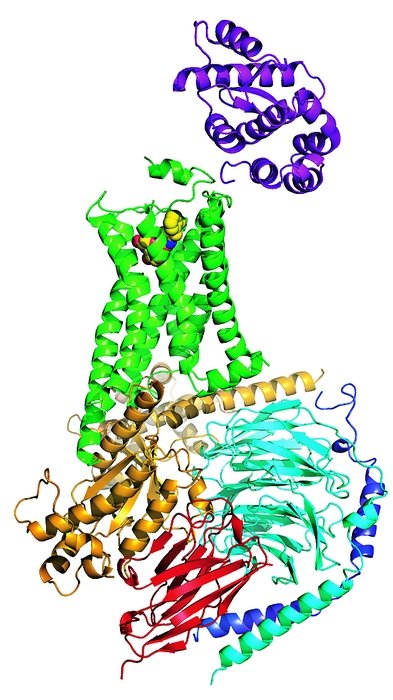 Credit: Nature
An X-ray crystal structure depicts a β adrenergic receptor (green) with its G protein (yellow, blue, and aqua). The complex is stabilized by a llama antibody (red) and the enzyme T4 lysozyme (purple).

Robert J. Lefkowitz and Brian K. Kobilka received this year’s Nobel Prize in Chemistry for unraveling the molecular workings of G-protein-coupled receptors (GPCRs). These receptors are a family of proteins that transmit biological messages for regulating functions such as vision, smell, taste, and neurotransmission. Because of their key roles, GPCRs are targets for roughly half of all medications on the market. For decades, researchers knew that hormones interacting with cell surfaces led to changes inside cells. But the exact nature of this chemical signaling was a mystery. Lefkowitz, of Duke University, first traced the receptors responsible for this signaling with radioactive agents in 1970. Kobilka, now at Stanford University, isolated the gene for one of those receptors, the β-adrenergic receptor, as a postdoc in the Lefkowitz lab in the 1980s. Kobilka realized the receptor is made up of seven helices, just like rhodopsin, which resides in the retina and responds to light. Kobilka and Lefkowitz surmised that a large family of these seven-helix receptors—the GPCRs—must exist. Their work allows medicinal chemists to better understand the proteins they are targeting when they design new drugs, says Fiona H. Marshall of Heptares Therapeutics, a firm that specializes in GPCR drug discovery. Although the Nobel Committee pointed to Kobilka’s recent research achievements at Stanford, including the announcement last year of the first X-ray crystal structure of a GPCR bound to its signaling partner, “this Nobel Prize is not just about the GPCR structure,” Marshall says. “That was the icing on the cake at the end.”