Materials science developments advance the integration of electronics and tissue 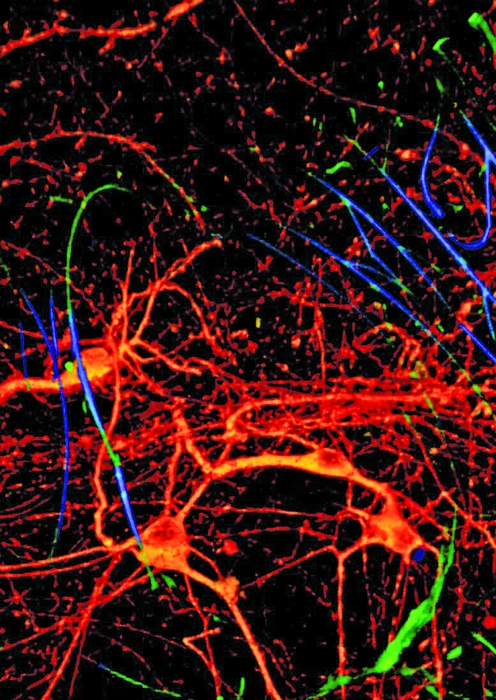 Credit: Fiorenzo Omenetto
A circuit made with ultrathin silicon dissolves in water, shown here with a standard pipette tip.

Fictional cyborgs and characters such as Data—the humanlike android on “Star Trek: The Next Generation”—may have gotten a little closer to reality this year. C&EN reported on several advances in integrating electronics with tissue. Until now, these efforts had been restricted to the tissue surface. But a team headed by Charles M. Lieber of Harvard University and Daniel S. Kohane of Harvard Medical School integrated electronics in tissue in three dimensions (C&EN, Sept. 3, page 13; Nat. Mater., DOI: 10.1038/nmat3404). They cultured cells on a scaffold of a silicon nanowire mesh studded with field-effect transistors. They were able to detect electrical signals from cardiac cells grown on the scaffold. Then there’s John A. Rogers and coworkers at the University of Illinois, Urbana-Champaign, who were more concerned about being able to dispose of implantable electronics. They designed ultrathin silicon integrated circuits on a silk substrate—the circuits simply dissolve at the end of their useful life (C&EN, Oct. 1, page 9; Science, DOI: 10.1126/sci​ence.1226325). On another front, Zhenan Bao and coworkers at Stanford University moved a step closer to electronic skin that can heal itself—a hallmark of natural skin. They developed a composite material made of a hydrogen-bonding polymer network embedded with nickel microparticles that can restore both its electrical properties and its mechanical properties after being damaged (C&EN, Nov. 19, page 8; Nat. Nanotechnol., DOI: 10.1038/nnano.2012.192). Bao and her coworkers want to use the composite as electronic skin for robots or biomimetic prosthetic devices. In another development, a team from the University of Michigan led by Daryl R. Kipke, Nicholas A. Kotov, and Joerg Lahann advanced toward a goal of developing electrodes that interface neurons with brain-controlled prosthetic devices (C&EN, Nov. 19, page 39; Nat. Mater., DOI: 10.1038/nmat3468). The electrodes, which are made from 7-μm carbon fibers coated with four polymer layers, are small enough to measure the electrical activity from individual neurons.

Ionic Liquids
Chemistry in Pictures: Papa’s got a brand new solvent
Materials
Fluorescent materials are the brightest ever made
Biomaterials
Fruit’s metallic blue caused by lipid nanostructures
Share X
To send an e-mail to multiple recipients, separate e-mail addresses with a comma, semicolon, or both.
Title: Integrating Man And Machine
Author: Celia Henry Arnaud
Chemical & Engineering News will not share your email address with any other person or company.