[+]Enlarge
Credit: Solyndra
Republicans in the House used the President’s support of Solyndra—he’s shown here during a 2010 visit to its headquarters—to make a political statement about wasteful spending on clean energy. 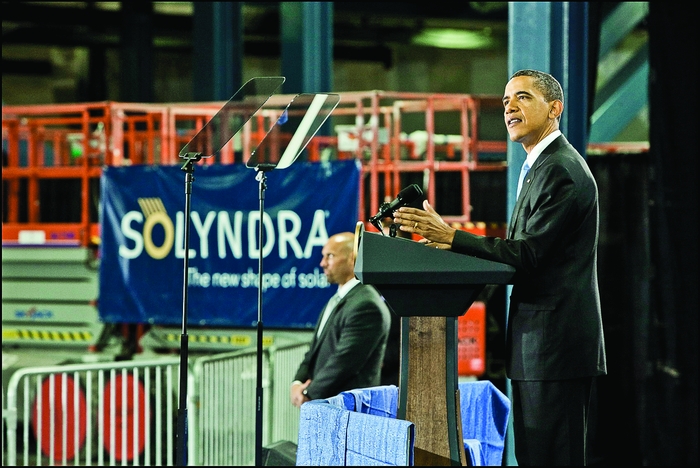 Credit: Solyndra
Republicans in the House used the President’s support of Solyndra—he’s shown here during a 2010 visit to its headquarters—to make a political statement about wasteful spending on clean energy.

Over the past year, Congress has accomplished little to influence the nation’s use of energy resources. Although key House of Representatives and Senate committees have held hearings and press conferences and issued statements and even passed bills, the committees cleared little legislation that had much of a real possibility of becoming law.

Instead, in the Republican-controlled House, committees focused primarily on oversight hearings and passed legislation with a political goal of attacking the Obama Administration’s energy, environmental, and economic policies. In the Democrat-controlled Senate, committees held hearings that centered on critical energy and environmental issues and legislation, but the body lacked the drive needed to pass a bill.

A few exceptions to this congressional impasse emerged, however. This month, both bodies agreed on a modest energy-efficiency bill (H.R. 6582), which the President signed on Dec. 18. In various forms, the House and Senate have discussed elements of the bill for more than a year. In the end, lawmakers trimmed its scope and added provisions to ease compliance with more rigorous electricity-efficiency standards.

Despite its limitations, the law should reduce U.S. electrical demand by 12% by 2030, according to calculations by the Senate Committee on Energy & Natural Resources. The bill cleared the House by a vote of 398-2 and the Senate by unanimous consent without a vote.

Among provisions of interest to the chemical industry, the bill includes sections to better coordinate industrial R&D among government agencies and reduce barriers to deploying industrial energy-efficiency technologies.

“At a time that Washington is gridlocked, it is notable that the only energy bill with enough bipartisan support to pass is one that targets energy efficiency,” says Steven Nadel, executive director of the American Council for an Energy-Efficient Economy. He calls it a “step forward and one that we hope the next Congress can build upon.”

One ensures that U.S. airlines do not have to participate in the European Union’s cap-and-trade system for greenhouse gas emissions. The bill was signed into law by the President in November and authorizes the Department of Transportation to prohibit U.S. airlines from complying with EU requirements. The EU suspended its program just before Congress passed the final version of the legislation, so the Transportation Department has not yet attempted to use its new power.

The other bill that became law requires an improved inspection and safety system for gas and hazardous liquids pipelines with the majority of costs offset by fees collected by pipeline operators.

More typical this year, however, were actions like those of the House Energy & Commerce Committee, where seven energy and environmental bills passed with support sharply divided between the committee’s Democratic and Republican members.

Most of the bills specifically attacked an environmental regulation or an Obama Administration policy. For instance, the No More Solyndras Act (H.R. 6213) was intended to block the Department of Energy’s loan support program for manufacturers of new technologies. The bill came on the heels of a Republican-led, 18-month-long committee investigation of DOE’s support for the company. The investigation resulted in the release of tens of thousands of pages of White House and DOE documents and testimony from Administration officials involved with the failed solar company, which defaulted on its $500 million in federal loans. The House passed the bill, but the Senate never acted on it.

Another bill of symbolic importance was the Stop the War on Coal Act (H.R. 3409). It rolled several earlier committee-passed bills into one, with the goal of protecting coal companies and coal-burning utilities from government regulations. It would have blocked EPA from using its authorities to limit carbon dioxide and other greenhouse gas emissions and would have checked EPA power to regulate coal ash and air emissions. The Senate never took it up.

But both bills became part of key election campaigns in specific parts of the country, particularly in regions highly dependent on fossil-fuel resources.

On the other hand, the committee’s minority leader, Rep. Henry A. Waxman (D-Calif.), called the Republican-led lower body the “most antienvironment House in history.” Last June, Waxman released a report prepared by House Democrats that identified 247 “antienvironmental votes” taken by the House over an 18-month period.