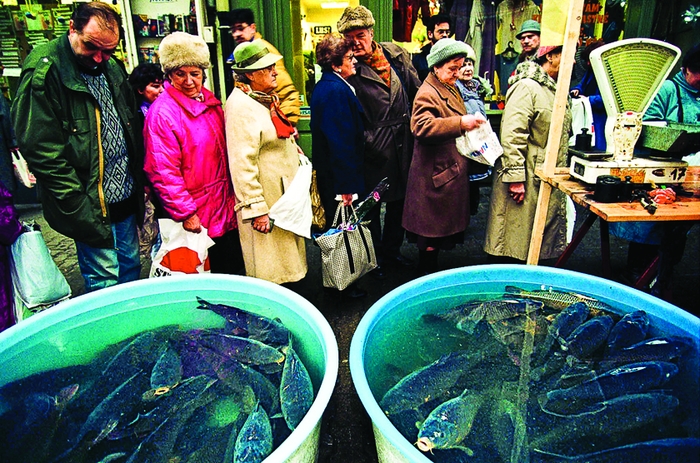 Just as people in the U.S. rush to buy a turkey or spiral-cut ham for Christmas dinner each year, residents in the Czech Republic wait in line during December to pick up a nice carp. As tradition dictates, Czechs buy the oily freshwater fish from street vendors while it’s still alive and then take it home fresh for a Christmas Eve feast.

Last year, a research team led by Hynek Burda of the University of Duisburg-Essen, in Germany, took advantage of the Czech Republic’s hankering for carp to conduct a little experiment. He and a team of seven other scientists traveled to 25 markets in the Prague area from Dec. 18 to 24, photographing the captive fish in water-filled barrels.

Burda, a zoologist, and his group were curious whether carp, like birds and some migratory fish, can sense Earth’s magnetic field and align themselves with it. So the team shot pictures of some 800 barrels from above, noting conditions such as air and water temperature and even the position of street lights.

After analyzing the positions of more than 14,000 fish and convincing themselves that various environmental conditions had no bearing on the result, the researchers concluded that the carp aligned themselves most often along Earth’s north-south axis. The finding was recently published in PloS One (DOI: 10.1371/journal.pone.0051100).

Although the study was conducted on a whim and during the scientists’ spare time, Burda tells Newscripts, the finding is important. “It shows that magnetoreception is more common among animals than we previously thought,” he adds. Carp aren’t migratory fish, he says, and yet it seems as though they sense geomagnetic fields.

Before you pass the cheese plate at your next holiday shindig, molecular biologist Christina M. Agapakis wants you to stop and think about why those blocks of dairy goodness smell the way they do.

Along with artist and odor expert Sissel Tolaas of Re_SearchLab, in Berlin, Agapakis recently explored the relationship between emotions and odors perceived by humans (Curr. Opin. Chem. Biol., DOI: 10.1016/j.cbpa.2012.10.035). The researchers did this by making their own cheese—literally. They swabbed their armpits, hands, noses, and feet to collect starter bacteria cultures for cheese fermentation.

Typical cheese making involves a Lactobacillus starter culture that ferments the lactose in milk, says Agapakis, now a postdoc at the University of California, Los Angeles. The lactic acid generated during the process curdles the milk, leading to clumps of fat and protein (curds) that eventually get pressed and aged.

When asked what possessed her to make cheese from body microbes rather than Lactobacillus, Agapakis says, “We were thinking about body odors” and why people are disgusted by them. “Then we were struck by the fact that those same odors and the microbes that make them are actually part of cheese,” she adds. For instance, Propionibacterium is used to make Swiss cheese, but it’s also a contributor to armpit aroma.

Knowing that people already accept bacteria in cheese, the pair wondered whether humans would become more comfortable with their bodily microbes and odors after seeing and smelling the connection. The answer, so far, seems mostly to be no. According to Agapakis, when presented with the experiment, people usually say, “You’ve ruined cheese for me forever,” she laughs.

Agapakis, though, assures Newscripts that body cheese isn’t that bad. Armpit cheese is especially pleasant smelling and tastes like a fresh farmer’s cheese, she says. On the other hand, she warns, “I would avoid the foot cheese.”

Art & Artifacts
Prehistoric parents weaned babies with animal milk
Food Science
Reconstructing the caveman diet and converting carnivores
Biological Chemistry
How oysters and whales are more like us than we thought
Share X
To send an e-mail to multiple recipients, separate e-mail addresses with a comma, semicolon, or both.
Title: Shooting Fish In A Barrel, Extreme Cheese Making
Author: Lauren K. Wolf
Chemical & Engineering News will not share your email address with any other person or company.