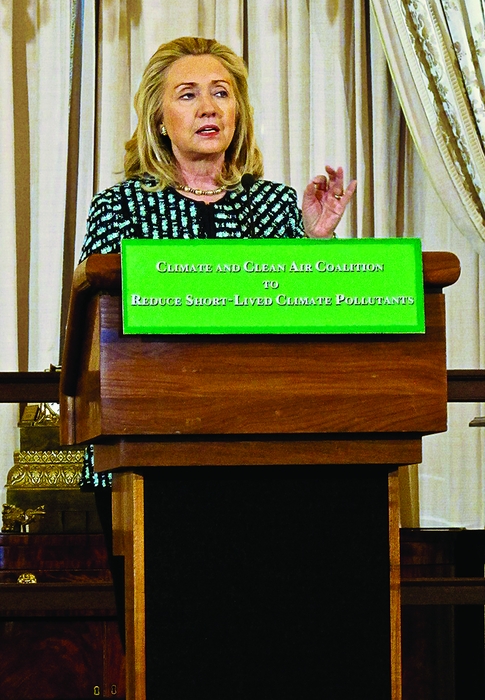 By reducing emissions of these pollutants, the world can significantly reduce the amount of human-caused climate change that is expected by 2050, said U.S. Secretary of State Hillary Rodham Clinton, who announced the new effort on Feb. 16. These three pollutants stay in the atmosphere for a relatively short time—from days to decades—compared with up to centuries for carbon dioxide, the main greenhouse house produced through human activities.

Controlling these short-lived pollutants has other significant benefits in addition to reducing climate impacts, Clinton stressed. “They also destroy millions of tons of crops every year and wreak havoc on people’s health,” she said. Black carbon is a component of particulate pollution linked to respiratory and cardiovascular problems. Methane contributes to ground-level ozone, which can cause health problems and reduce crop yields.

HFCs were developed as replacements for chlorofluor­ocarbons, which erode Earth’s protective stratospheric ozone layer. Potential actions to control HFC emissions include reduction of leaks in equipment that uses these chemicals and demonstrations of technology that uses more environmentally benign refrigerants.

Clinton warned that the new coalition would not replace efforts to ratchet down CO2 emissions. “This coalition is intended to complement, not supplant, the other actions we are and must be taking” to combat climate change, Clinton said.

The effort “is buying us back some time we’ve already lost” to reduce greenhouse gas emissions, said Achim Steiner, executive director of UNEP.

Initially, under the plan, the U.S. will chip in $12 million to the initiative over the next two years, and Canada will pony up $3 million. More contributions are expected from other countries.

Environment
Power plant emission rule headed for repeal, possible replacement
Environment
The global push against hydrofluorocarbons
Environment
EPA Clamps Down On Hydrofluorocarbons
Share X
To send an e-mail to multiple recipients, separate e-mail addresses with a comma, semicolon, or both.
Title: Curbing Climate Change
Author: Cheryl Hogue
Chemical & Engineering News will not share your email address with any other person or company.

Comments
Renee Sytwu (February 21, 2012 10:17 AM)
If US determines sincerely to reduce the short-lived GHG, methane, it should take a stand in its food policy by stopping subsidies to crops for animal feeds while starting subsidies to Organic Plant Farming in the 2012 Farm Bill. See details at http://www.concernedcitizensnetwork.org/category/take-action/.
Reply »

Bahaa sanad (February 22, 2012 3:27 PM)
why Egypt is not listed in that protecting program which has got a lot of native methanol production factories .
www.methanex.com
Reply »