Fine Chemicals On The Upbeat

[+]Enlarge
Credit: Peter Cutts Photography
Informex returned to the Crescent City for the first time since 2008. 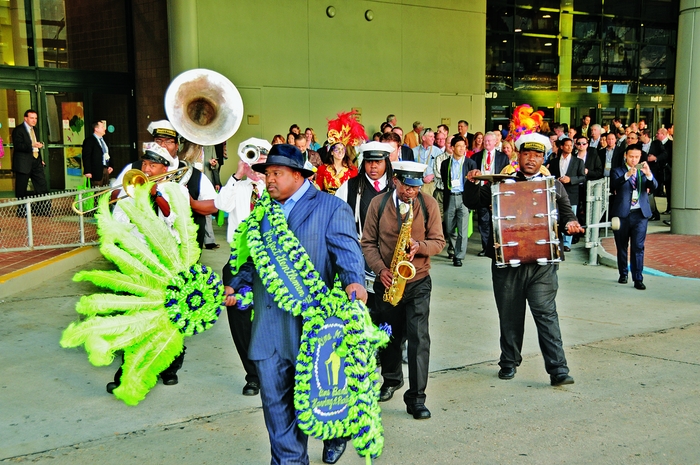 Credit: Peter Cutts Photography
Informex returned to the Crescent City for the first time since 2008.

Attendees at Informex were exuberant last week upon their return to New Orleans, buoyed by solid sales growth in 2011. News of consolidation in the sector and plans for China could be heard amid the buzz at the trade show for fine and pharmaceutical chemicals.

FIS and Delmar have partnered for several years, according to Laura Coppi, general manager of sales and marketing at FIS. Delmar will give FIS its first facility in North America, Coppi said, and its pilot-scale manufacturing complements FIS’s kilogram-scale and larger production capability in Vicenza, Italy. Sales at FIS grew 25% in 2011 to reach $290 million, Coppi said, and she is optimistic that it can sustain that level of growth this year.

The fine chemicals sector still has its eyes on Asia. U.S.-based ChiralQuest announced plans to acquire a full-scale manufacturing facility in Jiangxi, China. The plant will feature 60 vessels ranging in size from 50 to 3,000 L, with a total volume of 80,000 L, said Ian C. Lennon, senior vice president of business development.

Asymchem Laboratories announced the opening of a large-scale facility in Dunhua, China, to meet demand for pharmaceutical-grade intermediates. The company said it invested $20 million in the project and will spend another $12 million by 2014. This year, it plans to triple capacity and add the capability to produce active pharmaceutical ingredients, said James Gage, Asymchem’s chief scientific officer.

Business
Mood is bright at new drug ingredients show
Business
FIS nabs nearby Zach System plant
Business
Cambrex rides a wave to further expansion
Share X
To send an e-mail to multiple recipients, separate e-mail addresses with a comma, semicolon, or both.
Title: Fine Chemicals On The Upbeat
Author: Rick Mullin
Chemical & Engineering News will not share your email address with any other person or company.