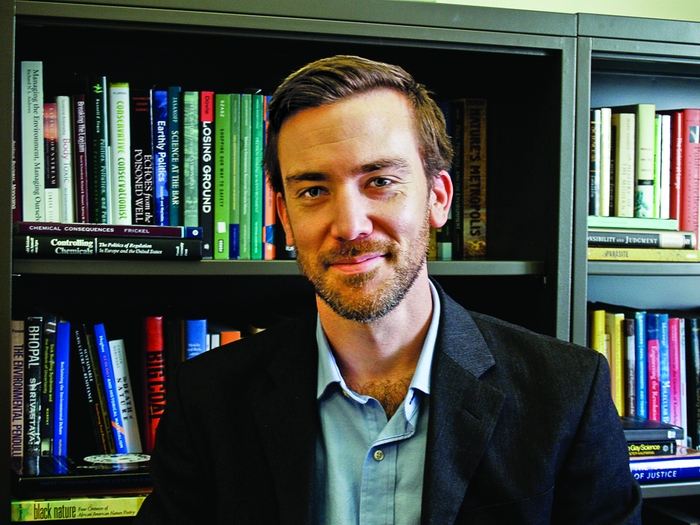 For several years, some members of Congress have been trying unsuccessfully to reform the Toxic Substances Control Act (TSCA), a law passed in 1976 to permit regulation of new and long-produced chemicals.

An attempt to use this law to limit a substance already on the market—the known carcinogen asbestos—failed in 1991, despite a decadelong effort by the Environmental Protection Agency. For this and other reasons, TSCA has been called flawed by environmental and industry groups alike.

As efforts to reform the problematic statute falter because of deeply divided partisan politics and stakeholder disputes, science historian Jody A. Roberts has stepped beyond the current-day wrangling to scrutinize the early days of TSCA’s development and implementation. The director of the Center for Contemporary History & Policy at the Chemical Heritage Foundation, Roberts hopes to understand why TSCA failed to live up to the expectations of its original sponsors and why it has been less successful than other environmental legislation developed in the 1970s such as the Clean Air Act and the Clean Water Act.

As part of the project, Roberts and his colleagues conducted 14 in-depth interviews with people involved in conceiving, writing, and implementing TSCA. They included J. Clarence Davies, who drafted a first version of the policy as a staff member on the President’s Council of Economic Quality, and Warren R. Muir, who was the first director of the Office of Toxic Substances at EPA.

One of the most surprising facts to emerge from these interviews is that what has become the most utilized part of this law was one that most people believed early in TSCA’s history would have “no teeth whatsoever,” Roberts says.

“When TSCA got passed, everybody thought the weakest part was going to be the new-chemicals component,” which gave EPA the authority to begin reviewing all new chemicals introduced to the market. “Yet almost every single person we’ve interviewed said that’s been one of the most effective aspects from implementation of this law,” Roberts notes.

In fact, regulating new chemicals was not the major motivation for developing TSCA. Instead, the law came out of concerns about the harmful effects of substances in wide circulation such as vinyl chloride, asbestos, and particularly polychlorinated biphenyls. With the success of laws to regulate drugs, cosmetics, and pesticides, lawmakers in the 1970s wanted “a gap filler for all the chemical products that did not fit into existing regulatory frameworks,” Roberts says.

When Congress passed TSCA, “two major flaws” prevented its effective implementation, Roberts says. The first is that it lacks a clear mandate. Explicit mandates ensure that, even if agencies such as EPA experience high political turnover, new people in these positions know what they are supposed to do, according to Roberts. “Instead you have a new director and assistant administrator coming in every couple of years and setting up their own ideas about what you should focus on with TSCA.”

The lack of a clear mandate was partly due to the inexperience of the legislation writers. “They were coming out of law school in the ’70s, so excited about taking part in the creation of new environmental laws. It was an expansive, evolving area that people had really high hopes for,” but not much experience in, he explains.

TSCA’s writers drew inspiration from the Federal Insecticide, Fungicide & Rodenticide Act, the statute that controls pesticides, Roberts says. “Chemical commerce is so much more complicated than pesticides. In terms of pesticides, you are talking about a finished product that is going to be used by a specific end user,” Roberts says. TSCA was supposed to cover 80,000-plus bulk and specialty chemicals that are found throughout the supply chain. “How do you cast a net over such a complicated system? The pesticides act simply doesn’t apply as a model.”

In addition, “TSCA’s writers wanted to take an entire life-cycle approach,” Roberts says. “They weren’t just thinking about [regulating] certain molecules in certain media [such as water or air], but molecules moving through entire ecosystems. That’s something that was easy to think about philosophically. It was not easy to implement as a public policy.”

The second flaw with TSCA is that “it quickly became an orphan,” Roberts says. Unlike other environmental policies being written at the time, TSCA did not originate in the Senate Committee on Environment & Public Works (EPW) but instead in what is now the Senate Commerce, Science & Transportation Committee. Only after TSCA passed in Congress did it come under the purview of EPW.

EPW had no institutional experience, commitment, or staff involved in writing TSCA, Roberts says, and this affected its oversight of TSCA’s implementation by EPA. Someone at EPW or its equivalent in the House needed to have occasionally brought EPA folks to the Hill to grill them about TSCA implementation, he adds. “But the fact is, EPW never really did so,” and the law was left to languish.

By contrast, the more successful Clean Air Act and Clean Water Act “were cultivated, developed, written, and had origins in the committee that continued to have oversight for them once they were passed,” he says. “TSCA really sticks out as something different.”

Policy
Update Of Chemical Law Stalls
Policy
Congress Considers States’ Regulations
Policy
Call For ‘Best’ Science May Be Toxic
Share X
To send an e-mail to multiple recipients, separate e-mail addresses with a comma, semicolon, or both.
Title: Jody Roberts
Author: Sarah Everts
Chemical & Engineering News will not share your email address with any other person or company.