After a brisk first quarter, big spending on chemical acquisitions slowed in 2011

The slothlike economic recovery did not turn the chemical industry away from deal-making in 2011, but as the year wore on and business uncertainty increased, fewer firms reached out for megadeals.

The number of acquisitions announced in 2011 was slightly ahead of the number in 2010, nudging up to 114 from 112. But total deal value for the year dipped sharply by 28% compared with 2010. Overall deal value was a healthy $43.2 billion in the first quarter, but by the fourth quarter it had sunk to $7.5 billion.

In general, chemical companies have strong balance sheets and are motivated to use them to grow through acquisition, analysts say. Early in 2011, executives surveyed by PricewaterhouseCoopers (PwC) said they were feeling positive about the economy. But in the second half, “though they were not pessimistic, they were concerned; they expressed a guarded outlook,” says Tracey A. Stover, global chemicals leader for the tax and advisory firm.

Those changing attitudes corresponded to slowed deal activity, Stover observes. “Executives are less inclined to react quickly to a large deal when they are uncertain about the economy. I still believe there are a lot of discussions going on, but the deals have not been announced.”

Twelve chemical deals worth $1 billion or more were completed in 2011, three more than in 2010. However, no megadeals were completed in the last five months of 2011. Activity is picking up again in 2012. So far, Eastman Chemical struck a deal to acquire Solutia for $4.7 billion, Westlake Chemical made a $1 billion bid for Georgia Gulf, and Indorama agreed to buy Old World Industries’ chemical business for $795 million.

In 2011, six of the 12 $1 billion-plus deals involved specialty chemical firms as targets. Danisco, Rhodia, International Specialty Products, Süd-Chemie, Arch Chemicals, and the carbon black business of Evonik Industries were snapped up. In 2010, in contrast, specialties were not a big mover. Instead, four of the nine megadeals were for fertilizer firms as companies such as CF Industries and mining firm Vale pursued an aggressive strategy of consolidation.

Two deals in the fertilizer industry wound up on the 2011 list as well. The largest deal was Cargill’s sale of its controlling interest in Mosaic to Cargill stock- and bondholders, worth $8.9 billion according to PwC. The second was a $1.1 billion deal by a subsidiary of Vale called Mineração Naque to buy the remaining publicly available stock in Vale Fertilizantes.

In 2011, large acquisitions by private investment firms were less common than in 2010. Only one deal of this type—Evonik’s sale of its carbon black business for $1.3 billion—made the megadeal list. In 2010, there were three big private equity deals, including the almost $10 billion buyout of LyondellBasell Industries by investors Apollo Management and Access Industries and the purchase of Dow Chemical’s Styron unit by Bain Capital.

Still, participation by private equity firms in the overall chemical deal market­place increased in 2011 to 17.4% from 16.2% in 2010, PwC found. And private equity heavyweight Apollo Management was responsible for the only megadeal announced in the fourth quarter: the still-pending purchase of Belgium-based specialties firm Taminco from its backer, CVC Capital Partners. The deal is valued at $1.4 billion. 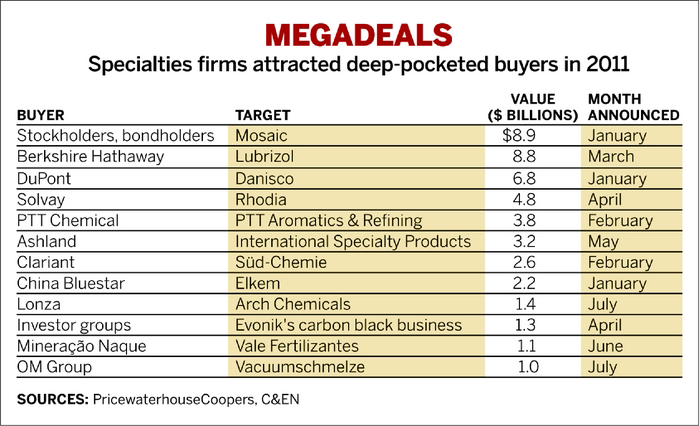 For strategic buyers DuPont and Ashland, the attractiveness of specialty chemical firms was proved after they bought Danisco and International Specialty Products (ISP), respectively, early in 2011. Last month, DuPont Chief Executive Officer Ellen J. Kullman told investors that Danisco contributed one-quarter of DuPont’s 20% increase in 2011 sales. In the fourth quarter, DuPont’s sales volume was down 10%, but portfolio changes from the acquisition made up the difference. Danisco brought an enzyme business, which is now part of DuPont Industrial Biosciences, and a food ingredient business, now part of DuPont’s nutrition and health division.

At Ashland, the purchase of ISP brought $450 million in October–December sales—the firm’s fiscal first quarter—to what is now Ashland’s specialty ingredients business. The firm recognized improved margins as the ISP integration brought higher prices and volume gains in the construction and energy markets.

“Our first-quarter financial results reflect the improved earnings power from Ashland’s transformation into a high-growth specialty chemical company,” said James J. O’Brien, Ashland’s CEO. “The addition of ISP has significantly expanded our positions in higher-margin growth markets such as personal care and pharmaceuticals, and we are beginning to see the bottom-line benefits from our broadened business portfolio.”

Regardless of quarter-to-quarter fluctuations, specialties businesses are attractive buys, says William Breen, chemical industry practice leader at mergers and acquisitions (M&A) firm CDI Global. Chemical companies that call themselves specialty must work hard to maintain their specialness. “Today’s specialty is tomorrow’s commodity—it’s really hard to remain in the specialty chemical business without acquisitions,” Breen points out. And larger firms like DuPont and Dow Chemical would like investors to see them as specialty-focused.

Also driving acquisitions is a desire to work around the trade-off that comes with high-margin specialties: low volumes. “However you come down on that debate, at the end of the day you might say, ‘Wouldn’t it be really great to have a high-margin, high-volume business?’ Maybe there is such a thing as a quasi-specialty commodity,” Breen muses.

That kind of thinking can result in massive deals such as Dow’s 2009 purchase of Rohm and Haas for $19 billion, Breen says. Although Dow has seen significant cash flow from that buy, CEO Andrew N. Liveris assured investors in a recent conference call that he isn’t planning another like it. “Moving forward, we continue to focus on our three priorities for uses of cash: rewarding shareholders, deleveraging, and investing in prudent organic growth,” he said. “Our firm priority is to generate cash and return cash to our shareholders. Allow me to be very clear. We do not need M&A. Our portfolio is in place, and it is delivering growth.”

For those executives not sitting out 2012, PwC’s Stover says, caution will prevail. “The difference would be in how long it takes to get a deal done—I venture you’ll see a lengthening of time. Maybe a company would walk away and perhaps come back again. When the economy comes back, chemical firms will be ready to pull the trigger.”