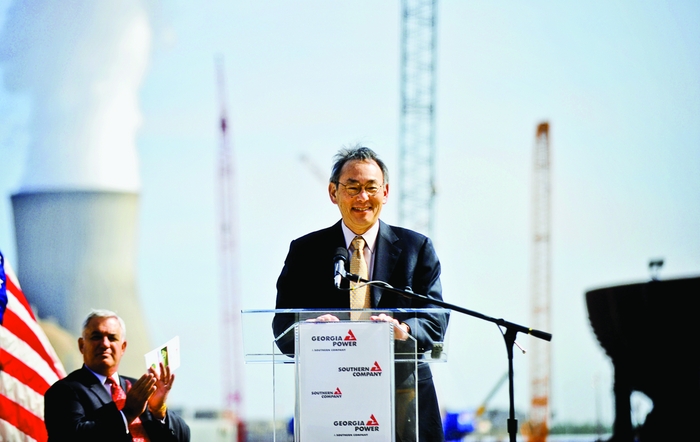 For the first time since 1978, the Nuclear Regulatory Commission has given the green light for a new U.S. nuclear power plant. NRC granted a license to Southern Co. to build and operate twin 1,100-MW reactors adjacent to two operating nuclear power plants at its Vogtle nuclear facility, near Waynesboro, Ga. Financing for the project still needs to be secured.

“The resurgence of America’s nuclear industry starts here in Georgia,” Energy Secretary Steven Chu told some 500 workers when he visited the site on Feb. 15, one week after Southern received the license. He laid out the Department of Energy’s plans to spur the industry: $10 million in proposed R&D funding for advanced reactors in 2013, formation of an internal working group to analyze recommendations of an independent radioactive waste commission, and a recent proposal to create a new nuclear research hub.

When approving the license, NRC used a new streamlined system that issues nuclear reactor construction and operating licenses together. Also speeding the process was NRC’s preapproval of Southern’s proposed use of an AP1000 pressurized-water reactor design. AP1000 uses passive safety features that would cool the reactor after an accident without the need for electricity or human intervention, the agency says.

The license was issued on a 4-1 commission vote, with NRC Chairman Gregory B. Jaczko being the lone dissenter. Jaczko sought to include specific license provisions requiring Southern to implement safety reforms that are likely to stem from NRC’s review of the failures that contributed to Japan’s Fukushima Daiichi nuclear power plant meltdown. The four other commissioners disagreed, saying that Southern would be required to comply with safety reforms that may result from the NRC review through its license.

Several U.S. senators, mostly from Western states, have urged NRC to speed up its review of the Fukushima incident and quickly implement tougher construction requirements that might result. Some details of the review are expected next month, which will mark the first anniversary of the earthquake and tsunami that damaged the Fukushima power plant.

The Vogtle twin reactors are expected to cost $14 billion, and Southern has gained conditional approval from DOE for an $8.3 billion government-backed loan guarantee. The company has begun early site preparation and says one reactor is expected to be in operation by 2016, with the other coming on-line a year later.