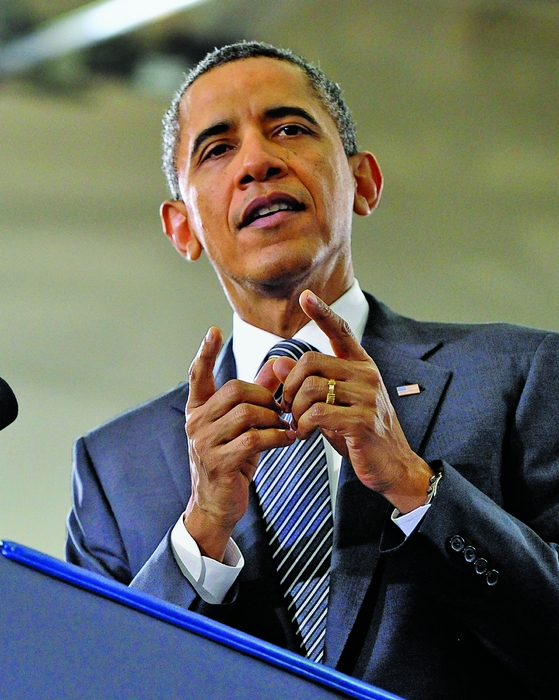 President Barack Obama is requesting $140.8 billion for federal R&D in his fiscal 2013 budget, which was rolled out on Feb. 13. The total R&D budget—which includes defense and nondefense work—is 1.4%, or $2.0 billion, more than it was in fiscal 2012. It increases funding for basic science research and for science, technology, engineering, and mathematics (STEM) education. 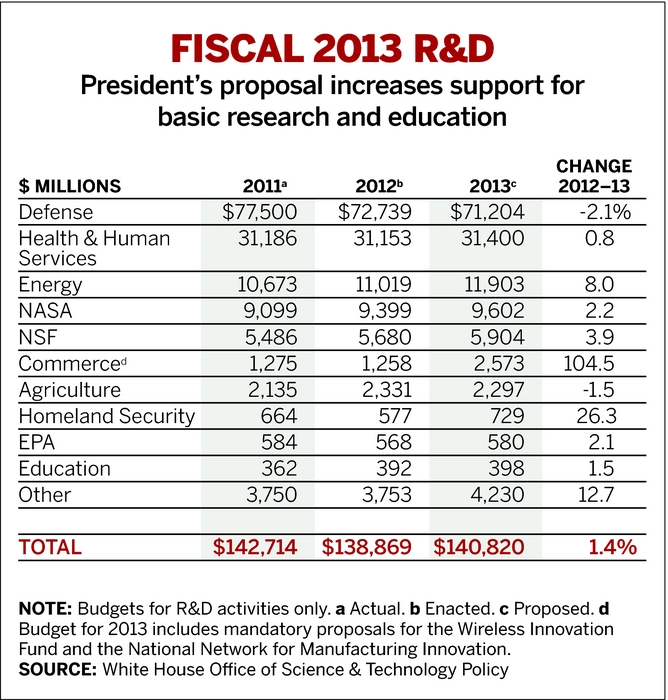 The increases are significant because the discretionary part of the budget, which funds nonmandatory programs such as R&D, is frozen at 2011 levels. Discretionary funding represents about one-third of the overall $3.8 trillion proposed budget.

“The budget that we’re releasing today is a reflection of shared responsibility,” the President said when announcing the request. “It says that we’re serious about investing in our future and investing in community colleges, and investing in new energy technology, and investing in basic research, [and] well, we’ve got to pay for it,” referring to the cuts the Administration has made to reduce the deficit by $4 trillion over the next decade.

Of the total R&D budget, $64.9 billion will go to nondefense work, a 5.0% increase over the 2012 level. The R&D increases are in part offset by cuts to the Department of Defense’s weapon-systems development activities.

“The priority the President attaches to R&D and STEM education, as reflected in his 2013 budget, is justified by the historic truth that investments in innovation and education today will more than pay for themselves tomorrow,” John P. Holdren, director of the White House Office of Science & Technology Policy (OSTP), said in a statement.

The President’s budget request raises the overall funding of three key basic science agencies: NSF, NIST (part of the Commerce Department), and the Department of Energy’s Office of Science. NSF is slated for a 4.8% increase to $7.4 billion in overall funding; NIST, a 14.1% increase to $857 million; and DOE Office of Science, a 2.6% increase to $5.0 billion. These increases keep the three agencies on a doubling track as outlined in the America Competes Reauthorization Act but will delay the target completion date.

The President also funds STEM education to the tune of $3.0 billion, up 2.6% from 2012. Spread across 13 federal agencies, the funding will focus on supporting evidence-based improvements in teaching and learning.

Overall funding of NIH, on the other hand, will remain at $30.8 billion in 2013 under the request.

Reaction to the President’s budget request was mixed, with general science supporters happy but those working in sectors now set to see flat funding or cuts less pleased.

On Capitol Hill, Republicans quickly denounced the proposed budget. “The President’s budget is a gloomy reflection of his failed policies of the past, not a bold plan for America’s future,” Speaker of the House of Representatives John A. Boehner (R-Ohio) said in a statement. “Our nation needs Washington to demonstrate some courage with a budget that honestly addresses the near- and long-term challenges we face,” said Boehner, who added that his party would soon offer its own 2013 budget proposal.