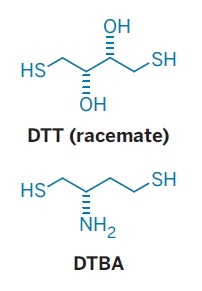 When biochemists want to break disulfide bonds within or between molecules, they add dithiothreitol to their buffer solutions. Now researchers describe an easy-to-make alternative to the small molecule that can reduce bonds more quickly. (J. Am. Chem. Soc., DOI: 10.1021/ja211931f).

One of the main uses of dithiothreitol (DTT) is to keep proteins unfolded for accurate sizing on electrophoretic gels. But DTT could be more efficient, says Ronald Raines of the University of Wisconsin, Madison: Only deprotonated thiol groups can reduce cysteine-cysteine sulfur linkages, but at physiological pH, DTT’s thiol groups exist almost exclusively in the protonated form.

Raines and his team found a more efficient molecule called dithiobutylamine (DTBA). Like DTT, DTBA contains thiol groups at either end of a butane chain, but instead of DTT’s two hydroxyl groups, DTBA contains a single amine. The two compounds have comparable reducing potentials, but DTBA sports lower pKa values for its two thiols. As an added bonus DTBA, unlike DTT, is nearly odorless.

DTBA reduced the oxidized versions of the small molecules 2-mercaptoethanol and glutathione three to five times as fast as DTT could. It reduced the enzyme papain, which has a relatively anionic active site, 14 times as fast as DTT could, but reduced creatine kinase, with its more cationic active site, as efficiently as DTT did. DTBA is not yet commercially available, but researchers can prepare it from the cheap, abundant starting material -aspartic acid in six steps, which Raines and his team say are amenable to industrial-scale synthesis.

Raines points out that the amine in DTBA gives the molecule a “handle” that researchers could use to remove it from samples using ion exchange chromatography or functionalized beads. Alternatively, the amine could be coupled to other reagents, endowing those compounds with multiple functionalities. “There’s a lot of flexibility with this molecule,” he says.

CORRECTION: This story was updated on March 1, 2012, to clarify that making DTBA at industrial scale has been proposed by Ronald Raines.

Biological Chemistry
Protein stays stable without its charges
Synthesis
Synthetic Receptor And Peptide Get Cozy
Synthesis
A Backdoor Route To SF5 Heterocycles
Share X
To send an e-mail to multiple recipients, separate e-mail addresses with a comma, semicolon, or both.
Title: A Better Disulfide Reducing Agent
Author: Jeffrey M. Perkel
Chemical & Engineering News will not share your email address with any other person or company.

Robert H. Woodman (March 1, 2012 7:18 PM)
How does this compare to tris(carboxyethyl)phosphine (TCEP) in both price and performance? An HCl salt, TCEP is a white powder, very stable, water soluble, and odorless.
Reply »

Ruebin (May 16, 2013 11:12 AM)
I have the concern of the stability. at PH=7, more thiol groups are in the unprotonated form, which means they are not stable in the neutrol stock solution.
Reply »