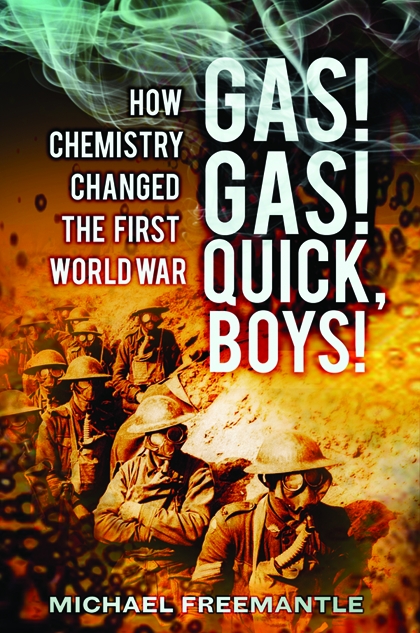 Now that the last generation that remembers World War II is passing away, our collective memory of that other great conflagration of the 20th century, World War I, is taking on the sepia tones of the long-ago past. Yet as Michael Freemantle reminds us in his sometimes absorbing, sometimes exasperating book “Gas! Gas! Quick, Boys! How Chemistry Changed the First World War,” the Great War was the first modern war, one in which science and technology were harnessed, as Freemantle observes, to “inflict industrial-scale carnage and destruction.”

Freemantle points out that WWI was, in fact, called by some the “chemists’ war,” a phrase he uses as the title of the first chapter of the book. Although many people associate WWI with the use of chemical weapons, which Freemantle does a fine job of covering, he is actually more interested in this broader dimension of chemistry being applied to warfare. “In many people’s eyes,” he writes, “the use of chemicals in the First World War has become synonymous with chemical warfare and the use of poison gases against enemy troops. … The term has a much broader context, however.”

Freemantle is an experienced science writer who is the author, coauthor, or editor of eight books on chemistry. From 1994 to 2007, he was C&EN’s European science correspondent. He is a diligent reporter, and like all good reporters he can become at least mildly obsessed with a topic. That comes through in “Gas! Gas! Quick, Boys!” It is both a strength and a weakness of the book.

It is a strength, because Freemantle provides readers with a thorough examination of all the ways advances in science and technology transformed the nature of war. Discoveries in metallurgy and chemistry led to vastly more destructive artillery shells, mines, bullets, and hand grenades. Poison gases were used offensively and defensively by both sides in the war. Medical advances changed battlefield treatment of the sick and wounded.

Even something so fundamental as the Haber-Bosch process for fixing nitrogen was critical to the war effort, Freemantle points out. Fritz Haber, who played a decisive role in the German war effort, discovered a catalytic process for synthesizing ammonia from nitrogen in 1908. BASF’s Carl Bosch designed a reactor for industrial-scale application of the Bosch process, and BASF began ammonia production in 1913. 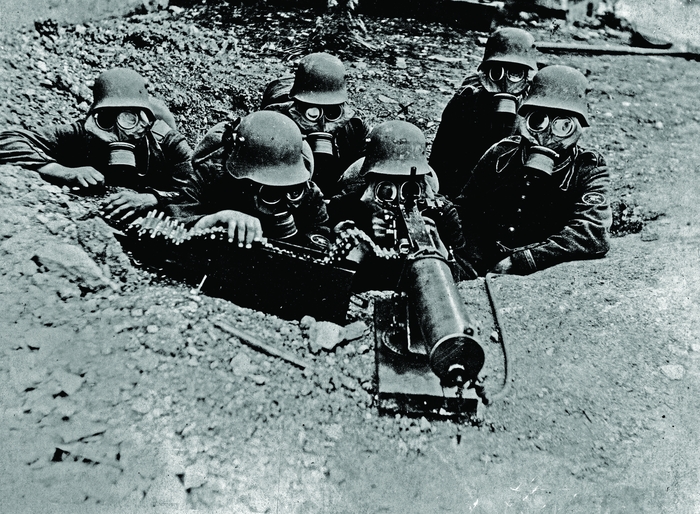 “At the beginning of the war in August 1914, there was widespread belief that the conflict would be short and almost certainly over within a few months,” Freemantle writes. “Germany entered the war with stocks of ammunition for an intensive campaign of just a few months.” The advent of trench warfare changed that calculus. A major problem Germany faced was manufacturing sufficient nitric acid to make explosives such as TNT and picric acid. Prior to the war, Germany imported nitrate-containing minerals from Chile, but the British blockade of German ports eliminated this source. The Haber-Bosch process provided Germany with an alternative source of nitrate, and without that capability, WWI might well have been a much shorter conflict, Freemantle maintains.

Freemantle’s desire to be comprehensive, however, leads some chapters to become almost catalogs of details that many readers will find difficult to get through. Chapters two, three, and four are on shell chemistry, hand grenades, and explosives, for example, and cover more than 50 pages of sometimes repetitive detail on these subjects.

That said, Freemantle does drive home a sense of the truly hellish conditions of the WWI battlefield where, he writes, some 60 to 70% of casualties resulted from shell fire. You understand why posttraumatic stress disorder was called shell shock during WWI, although Freemantle himself does not make this rather obvious point.

Despite the fact that Freemantle is interested in the totality of science and technology’s contribution to WWI, his treatment of chemical warfare is, to my mind, the strongest chapter in “Gas! Gas! Quick, Boys!” Although Germany was the first to use poison gas during the war—dispersing chlorine from gas canisters at Ypres, in Belgium, in April 1915—both sides used a variety of chemical weapons throughout the remainder of the war. Chlorine, phosgene, mustard agent, and other chemicals were dispersed from canisters and loaded into artillery shells. Some 150,000 tons of chemical agents was produced during the war, Freemantle writes.

“Whereas the use of chemical weapons is now regarded with abhorrence,” Freemantle writes, “chemical warfare had many advocates during and following the First World War.” He chillingly quotes one expert, Amos A. Fries, writing in 1920 in the ACS Journal of Industrial & Engineering Chemistry: “Considering its power it has no equal. … The gas cloud is inescapable. It sweeps over and into everything in its path. No trench is too deep for it, no dugout, unless hermetically sealed, is safe from it. Night and darkness only heighten its effect. It is the only weapon that is as effective in a fog or the inky blackness of a moonless night as in the most brilliant sunshine” (DOI: 10.1021/ie50125a005).

Freemantle states in the introduction to “Gas! Gas! Quick, Boys!” that the book is intended for the general reader and not just chemists who are interested in WWI, and several aspects of the book reflect that decision, though not always, I think, positively. For example, although many chemicals are discussed in the text, no chemical structures are provided. In some instances, Freemantle provides what amounts to the empirical formula for a compound, as when he writes of phosgene, “Each molecule of the gas contains just one atom each of carbon and oxygen, and two atoms of chlorine.”

In other cases, the information on a compound isn’t particularly useful to chemists or nonchemists. “Blistering agents,” he writes, “also known as vesicants, were first employed in 1917. German ‘Yellow Cross’ shells, for example, were filled with mustard gas, a vesicant and lung irritant. Mustard gas, also known as dichloroethyl sulfide, is in fact an oily liquid and an organic chemical containing not only chlorine but also sulfur.”

Despite these flaws, “Gas! Gas! Quick, Boys!” is an informative examination of a turning point in the history of warfare. It is also a reminder of just how creative human beings are in finding ways to kill and maim each other.

Materials
The Nazi origins of deadly nerve gases
Environment
Getting History Right
Synthesis
Who Was Fritz Haber?
Share X
To send an e-mail to multiple recipients, separate e-mail addresses with a comma, semicolon, or both.
Title: Transforming Warfare
Author: Rudy M. Baum
Chemical & Engineering News will not share your email address with any other person or company.