Transformative technologies aim to switch an environmental threat into a benefit 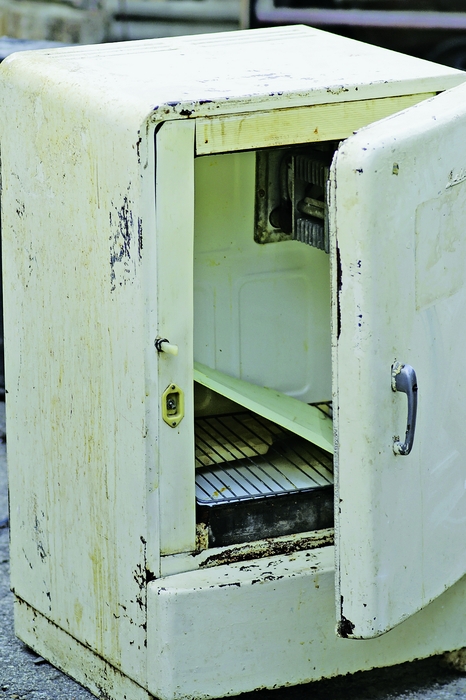 When old refrigerators and air conditioners die, the copper, aluminum, and steel used to make them are often stripped out and recycled to make new metal products. The refrigerants at the heart of these appliances are another story.

These fluorine-based compounds, like other ozone-depleting substances, pose a continuing threat to the environment. Sometimes they are recycled, but other times they are warehoused, incinerated at high cost, or illegally vented.

Seeing an opportunity, a number of firms have positioned themselves to efficiently destroy fluorine-based compounds or recycle them into products that are useful rather than problematic. Although the recycling technologies are not quite ready for prime time, developers hope that some good use may come of now-shunned chemicals.

Jeff Cohen, a former Environmental Protection Agency scientist, says ozone-depleting substances with the global-warming potential of more than 6 billion tons of carbon dioxide are stored in refrigeration and air-conditioning equipment and commercial and residential infrastructure around the globe. “That’s roughly the equivalent of a year’s worth of carbon emissions from every car, house, and factory in the U.S.,” says Cohen, now a partner at EOS Climate. His San Francisco-based firm helps refrigerant users adopt advanced refrigeration technologies with low ozone-depleting- and low global-warming-potential refrigerants in chilling equipment. New refrigerants are not simply drop-ins for old ones.

Although chlorofluorocarbon (CFC) refrigerants can be recycled to keep old equipment running, organizations like EOS see an environmental benefit to destroying CFCs and want to make a business out of it. EOS has partnered with DuPont and other firms to help customers capture and eliminate CFCs.

According to Cohen, captured CFCs are destroyed at a hazardous waste incineration facility in exchange for carbon credits usable in California’s new carbon trading program (C&EN, Feb. 18, page 22). CFCs get credits because they have been phased out under the Montreal Protocol, the international treaty governing ozone-depleting substances. Destruction of other refrigerants, among them hydrofluorocarbons (HFCs) and hydrochlorofluorocarbons (HCFCs), is not eligible for credit in California because they are still being produced, Cohen points out.

What happens instead to spent HFCs and HCFCs is that they go to companies such as Icor International, an Indianapolis-based firm that purifies, distills, and resells old refrigerants. Only badly contaminated and unusable refrigerants go to a government-approved incinerator, says Gordon McKinney, Icor’s chief operating officer.

One such facility is run by Veolia Environmental Services. The firm receives several 30,000-lb shipments a year of discarded refrigerants, which it destroys in rotary kilns at temperatures exceeding 870 °C, according to Gary McDuff, thermal product manager. Each shipment costs on average $45,000 to destroy.

The high cost of destroying the unwanted refrigerant gases means companies might want to do the job themselves. One option is a reactor from Germany’s SGL Group that a United Nations technology panel approved for use in May 2011.

Operating at 1,300 °C, the reactor destroys not just refrigerants but also other unwanted chemicals, according to Tom Burkett, an SGL vice president. Costs for the reactors vary, but Burkett says customers will save money compared with shipping refrigerants off-site for destruction.

The same UN panel also approved technologies submitted by two companies seeking to transform unwanted refrigerants into salable commodities. Both companies contend that a green light from the group, the UN Technology & Economic Assessment Panel, means they are on the right track toward the marketplace.

At the moment, the two firms are beginning to commercialize their recycling technology. One, Midwest Refrigerants, plans by this summer to open a demonstration plant in Oklahoma able to process more than 2 million lb annually of discarded fluorochemicals. A second firm, Australia-based Pacifitech, expects to start a semicommercial-scale unit by the end of this year in California.

Midwest Refrigerants is backed by Lew Steinberg, an entrepreneur who tells C&EN he was in refrigerant sales for 20 years. Seeing the high cost of destroying unusable refrigerants made him think there had to be another way to deal with them.

Steinberg hooked up with Gregorio Tarancon, a fluorine chemist who had worked for Union Carbide. Tarancon says the fluorochemicals now being treated as waste are actually valuable materials.

Tarancon designed and patented a process that converts CFCs, HFCs, HCFCs, and bromine-containing fire-suppressant halons into carbon dioxide and their original source chemicals: hydrogen fluoride, hydrogen bromide, and hydrogen chloride. These chemicals may be used to make any number of products including refrigerants, polymers, pharmaceuticals, and agrochemicals. “The economics work,” Tarancon claims.

According to Steinberg, processing a 30,000-lb shipment of unwanted refrigerants in Midwest’s conversion system would cost $7,500 and yield between $30,000 and $60,000 of useful chemicals, depending on the chemical mix going in.

Steinberg says the process took six years to develop and another three years to refine. Over that time, he has invested a few million dollars of his own money. “I’m in San Diego, a hotbed of venture capitalists, but no one here was interested in CFCs and HFCs. It’s not romantic. So I financed the process on my own,” he says.

Steinberg suggests that refrigerant producers such as DuPont, Honeywell, Solvay, and Mexichem could license his system to treat by-products at their plants. Refrigerant companies contacted by C&EN say they are aware of what Steinberg is doing, but they won’t comment further.

Ian D. Rae, a member of the UN assessment panel that approved Midwest Refrigerants’ process, tells C&EN that the technology should be particularly useful to destroy HFC-23 (trifluoromethane), a high-global-warming-potential by-product made in large quantities during the manufacture of the refrigerant HCFC-22 (chloro­difluoromethane) and DuPont’s Teflon fluoropolymer.

“HFC-23 is chock-full of fluorine and thus is a valuable source of hydrogen fluoride,” says Rae, who is also a fellow at the University of Melbourne, in Australia. The Midwest process would recover fluorine from HFC-23 that is now being stockpiled or destroyed at high cost.

Pacifitech’s technology, meanwhile, transforms a mix of fluorochemicals to vinylidene difluoride in a thermal process at temperatures between 725 and 900 °C. VDF is the precursor of polyvinylidene fluor­ide, an elastomer used to make durable wire insulation and other coatings.

Although Pacifitech’s technology doesn’t yield the variety of chemicals that Midwest Refrigerants’ process does, high-purity vinylidene difluoride sells for about $13 per lb, according to Eric M. Kennedy, a physical chemist and professor in the engineering school at Australia’s University of Newcastle and one of the owners of Pacifitech.

Kennedy says he and Newcastle colleague Bogdan Z. Dlugogorski started 15 years ago to develop an alternative to expensive plasma-based fluorochemical destruction. The Australian Research Council helped with a $1.2 million grant. They formed Pacifitech a few years ago to refine and license the technology.

Kennedy and Dlugogorski say they recently started work with a U.S. firm they won’t name to build a pilot unit in California. They expect to see it operating within 12 months.

Another promising technology to turn an environmental liability into a commercial asset is at an earlier stage of development. G. K. Surya Prakash and coworkers at the University of Southern California, in Los Angeles, developed a process to use HFC-23, the by-product of making refrigerants and Teflon, as a catalyst and raw material for pharmaceuticals and agrochemicals.

“We’ve tamed trifluoromethane,” Prakash explains, by reacting the chemical with elemental sulfur. The resulting trifluoromethanesulfonic acid is a valuable catalyst selling for about $300 per lb.

Prakash and his team also used trifluoromethane to make trifluoromethylsilane, an intermediate known as Ruppert-Prakash reagent. “We’ve turned a useless substance into a useful one,” Prakash says. A number of firms are interested in commercializing the discovery, but no deals have yet been made, he says.

Recycling firms such as Midwest Refrigerants and Pacifitech would also like to say they have turned useless substances into valuable ones. But it is early in the game for them as well. At least until the new technologies prove themselves in commerce, storage and high-cost destruction techniques will be the main alternatives to illegally venting the problematic gases.

Environment
The global push against hydrofluorocarbons
Business
OxyChem expansion will support new coolants
Business
Bromine Comes To The Rescue For Mercury Power Plant Emissions
Share X
To send an e-mail to multiple recipients, separate e-mail addresses with a comma, semicolon, or both.
Title: Entrepreneurs Seek To Turn Global-Warming Fluorochemicals To Beneficial Uses
Author: Marc S. Reisch
Chemical & Engineering News will not share your email address with any other person or company.