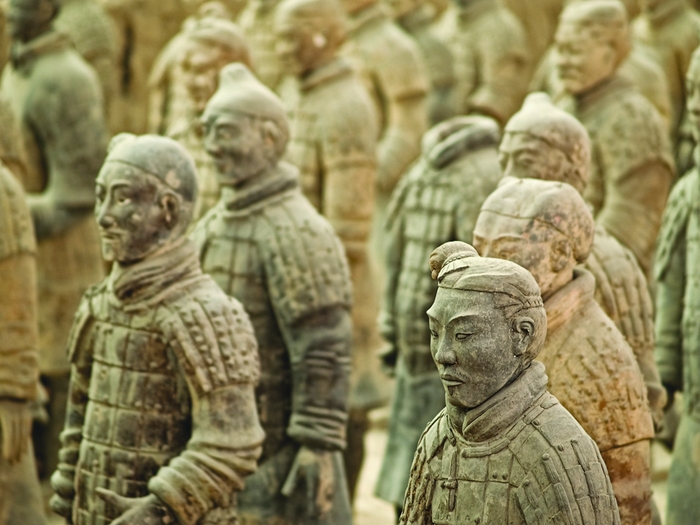 China’s famous Xi’an Terra-Cotta Army Warriors, on display in the pits from which they were excavated, might need extra protection from visitors, according to a study in Environmental Science & Technology (DOI:10.1021/es303981m).

When people pass through the exhibition halls surrounding the pits, they bring outside air with them. Coauthor Zhaolin Gu of Xi’an Jiaotong University and colleagues note that, along with humidity, air pollutants such as sulfur dioxide and nitrogen oxide can play a large role in the deterioration of the statues. For example, they say, the formation of gypsum on the surface of the relics could be related to the interaction between SO2 or SO42– in the air and CaCO3 in the soil and on the surfaces of the relics.

The researchers recommend using new measures to better preserve such artifacts. One approach is to use air curtain technology to help create an invisible barrier between the warriors and visitors.

The devices that generate the air curtain would resemble household air conditioners, blowing powerful air currents over the top of the pits to keep pollutants and heat away from the statues. A layer of cool air at the bottom of the pits would form a blanket of stagnant air around the relics to help prevent their further deterioration.

“Archeology museums have the responsibility of preserving and exhibiting the cultural inheritance of our ancient civilization,” the researchers write. “The challenge for the archeology museums is to produce an appropriate environmental control to ensure long-term preservation of relics within the premise that [it] could also maintain the panorama view of the excavation sites.”

With all the scientific instruments humming and the glassware shaking about, a research lab can be noisy. But that clamor is music to John LaCava’s ears.

“In the laboratory, if you pay close enough attention, you can hear a lot of interesting sounds and a lot of rhythms,” says LaCava, a research associate in Michael P. Rout’s cellular and structural biology lab at Rockefeller University. “I thought it would be interesting to get some of that recorded and turn it into music.”

So with the help of professional music producers Dan Kramer and Nicole Jung, LaCava and coworkers at Rockefeller incorporated everyday lab noises into musical compositions.

He says the idea to record the sounds came to him in a “eureka moment” when he was in the lab seated among a large jug of liquid being mixed with a magnetic stir bar, a water bath shaker, and a platform rocker. “Between the three of them, they were drumming,” says LaCava, himself a drummer who has played in several bands. “And everything just came together.”

LaCava says two of his favorite sounds are high-pressure liquid nitrogen being released from a tank and centrifuges accelerating and decelerating. The former makes a high-pitched squeal followed by a low resonance, and the latter covers a wide tonal range.

A strong proponent of science outreach, LaCava aims to make science more accessible to the public through music. “People like music, and if I could do a project that brings science and the ideas of science, including critical thinking, to people through music or art, then I might reach someone.”

His website, SoundsofScience.net, features his musical arrangements and also includes a database of science and engineering sounds (www.sosdb.net). The recordings are publicly available for download to anyone who wants to incorporate them into a musical composition. And LaCava invites Newscripts readers to upload their own recordings to the database.

Science Communication
Hammer time on Science Twitter and drummers keeping cool while keeping time
Education
Lego bricks for cutting-edge physics and for chemistry education
Reproducibility
To improve reproducibility in the lab, these chemists press ‘record’
Share X
To send an e-mail to multiple recipients, separate e-mail addresses with a comma, semicolon, or both.
Title: Preserving Terra-Cotta Soldiers, Making Music In The Lab
Author: Linda Wang
Chemical & Engineering News will not share your email address with any other person or company.

Comments
Joshua Gabriel-Black (February 20, 2017 4:39 AM)
You might want to change to color of the text due to the choice of background color the text is unreadable.
Reply »