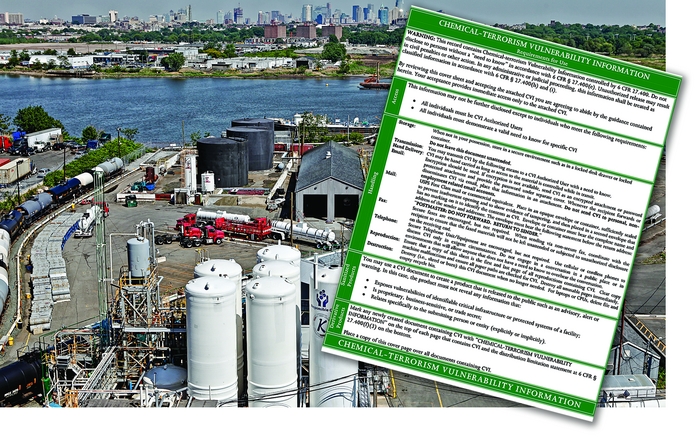 The Department of Homeland Security (DHS) has struggled to implement its six-year-old program for safeguarding the nation’s chemical plants against potential terrorist attacks. But government and industry officials say a new streamlined approach to putting the federal security requirements in place should yield positive results in 2013.

Still, critics of the security initiative are urging the Environmental Protection Agency to more tightly regulate the facilities to reduce risks from chemical releases that could result from an accident or an attack.

Established by DHS in 2007, the Chemical Facility Anti-Terrorism Standards (CFATS) program is designed to protect “high risk” facilities that produce, handle, or store threshold quantities of approximately 300 extremely hazardous chemicals from attack. The program is also intended to prevent the theft of materials that could be used as weapons.

Congress directed DHS to create the initiative after years of debate on Capitol Hill about how best to ensure that chemical plants and other manufacturing facilities cannot be used as tools of terrorism in the post-9/11 world.

Since the inception of CFATS, close to 3,000 of the more than 7,000 chemical facilities originally classified as high risk have eliminated, reduced, or otherwise modified their holdings of dangerous chemicals and are no longer covered by the program. The 4,380 facilities currently covered by CFATS are required to conduct vulnerability assessments to identify on-site security risks and prepare plans for mitigating those threats.

Security plans must meet a set of 18 risk-based performance standards set by DHS. The standards represent different aspects of potential vulnerability, such as controlling access to the facility, screening personnel, and securing the site’s assets.

DHS officials evaluate the plans and conduct plant inspections to make sure the security measures are adequate and properly implemented. The department is authorized to apply stiff penalties, including facility shutdowns, for noncompliance.

But the CFATS program has been troubled. An internal DHS review conducted in late 2011 exposed a litany of problems, including a lack of trained personnel, inadequate spending controls, and a failure by the department to approve any final site security plans.

David Wulf, deputy director of DHS’s infrastructure and compliance division, says “significant progress” has been made in addressing the systemic inefficiencies and inaction brought to light by the internal review. His office, which oversees the CFATS program, has been working on a 95-item action plan to get the program on track.

Most of the reforms have been implemented, Wulf says. For example, DHS is “successfully streamlining our review processes for facilities’ site security plans, improving our inspections-related procedures, and solidifying the division’s organizational structure.” He notes that DHS has now given preliminary approval to 261 chemical facility site security plans and signed off on 50 others after conducting on-site inspections.

“This year, our stakeholders can anticipate a significantly heightened pace of authorizations, inspections, and final approvals of site security plans,” Wulf says. The department has simplified the process for authorizing and approving facility security plans, “and we have set a goal of 400 approvals by the end of 2013.”

One reason for the anticipated increase in the pace of approvals is the department’s recent endorsement of new tools designed by the chemical industry. The tools help facilities comply with the requirement to submit a plan to DHS that outlines existing and planned measures to address potential security threats.

By law, DHS is allowed to approve “alternative security programs” established by private-sector entities. But in the past, facilities have focused almost entirely on using DHS’s online Chemical Security Assessment Tool to create and submit a site security plan.

The tool’s Web portal requires chemical facilities to complete “a lengthy document containing a series of yes/no questions regarding measures to minimize the risk of a terrorist attack or other security threat,” says William Erny, senior director of security at the American Chemistry Council (ACC), a trade association representing 140 chemical companies.

The assessment tool asks questions about the basic elements of a facility’s security plan, such as: Does the facility have a closed-circuit TV system? But one-word answers to such questions often fail to provide enough information for DHS to assess a facility’s actual security posture. As a result, department analysts have often had to seek additional data from plant operators, significantly delaying CFATS implementation.

“We recognize that our online tools need to become more user-friendly, both for facilities and for our reviewers,” Wulf says.

In an effort to improve the submission and review process, ACC began working with DHS last year on an alternative reporting framework. ACC recently released a guidance document and template that are designed to help chemical manufacturers provide all of the information DHS needs to effectively evaluate a facility’s security program.

The new tools developed by ACC will allow plant operators “to submit a document that is based on what is actually being done on-site to enhance security” and describes in detail how those measures meet or exceed the requirements of the CFATS program, Erny says.

“The guidance document and template provide an option that paints a clear picture of the security measures in place and provide a concise and reliable format for DHS analysis and site inspections,” Erny remarks. This alternative approach, he adds, will help ensure that a “complete security plan is presented to DHS inspectors during an audit.”

DHS formally approved the industry initiative in late February. In a letter to ACC Chief Executive Officer Calvin M. Dooley, Wulf commended the trade association for its “efforts to help high-risk chemical facilities meet the CFATS requirements through the development of the ACC alternative security program guidelines and template.”

The agency has been talking with other industry stakeholders, including the Agricultural Retailers Association and the Society of Chemical Manufacturers & Affiliates, about developing templates to help their members comply with CFATS, Wulf says.

However, critics of the chemical security program say the effort to speed up the approval of site security plans fails to address the catastrophic risks that chemical facilities pose to surrounding communities. The plans are of no comfort to the millions of Americans who live next to these plants, says Rick Hind, legislative director of Greenpeace, an activist organization.

“They have too often ‘sheltered in place’ or been assured that strange odors, flares, fires, or even explosions released ‘no harmful levels’ of dangerous substances,” he says. “We are unaware of any alternative security plans that require disaster prevention measures such as safer chemical processes.”

A Greenpeace-led coalition of environmental and labor groups has asked EPA to use its authority under the general duty clause of the Clean Air Act to require high-risk chemical facilities to adopt safer technologies and use less hazardous chemicals wherever feasible (C&EN, Oct. 8, 2012, page 37).

And although EPA has not made a decision on the petition, Rep. Mike Pompeo (R-Kan.) aims to make it a nonissue. A bill (H.R. 888) he introduced in the House of Representatives on Feb. 28 would bar EPA from mandating the installation of safer technologies at chemical facilities. It would also leave chemical facility security under the sole authority of DHS.