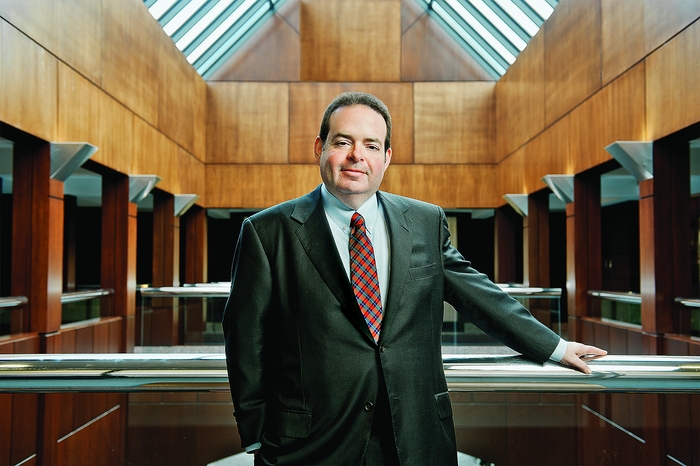 Rumors have been circulating for months that Thermo Fisher Scientific is preparing a bid for Life Technologies, an analytical instrumentation and biotechnology supplies specialist. Other instrument companies, among them Agilent Technologies and Danaher, are also said to be bidding.

Marc N. Casper, 45, Thermo Fisher’s chief executive officer, tells C&EN that he “can’t comment on market chatter.” But it should come as no surprise that Thermo Fisher might be among the firms prepared to ante up the $12.5 billion or so that would be needed to acquire Life Technologies.

Over the past three years, Thermo Fisher has spent nearly $8 billion on acquisitions as the firm broadened its ability to offer just about every type of instrument, service, and consumable for chemical and pharmaceutical research labs. Although a bid for Life Technologies would prove it wrong, Thermo Fisher says it is ready to slow its acquisitive pace and invest more in what it already has.

“We occasionally do acquisitions,” says Casper, who has an M.B.A. from Harvard University and became Thermo Fisher’s CEO in 2009. But “there is no gap we have to fill. We can compete successfully with what we have.” Acquisitions, Casper notes, aren’t the only growth avenue for Thermo Fisher, which had sales of $12.5 billion in 2012, up 8% from the year earlier.

The firm now places a good deal of emphasis on raising sales through new instrument introductions and expansions into emerging markets. But acquisitions still accounted for more than half of Thermo Fisher’s growth in 2012, Casper says. 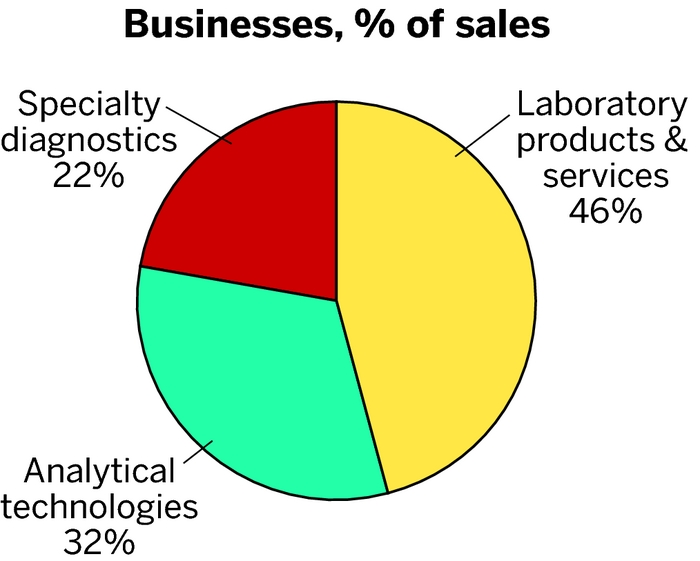 “Acquisitions make headlines,” Casper points out, “but new product launches are what get customers’ attention.” Last year the firm introduced instruments such as the iCap Q inductively coupled plasma mass spectrometer and the handheld TruNarc Raman narcotics analyzer, to name a few.

At the Pittsburgh Conference on Analytical Chemistry & Applied Spectroscopy, held in Philadelphia last month, thousands of analytical instrument users got a chance to see some of this year’s offerings from Thermo Fisher. They include upgraded software packages, such as Chromeleon version 7.2 to integrate lab instrumentation, and the iCap 7000 Series trace element spectrometer.

The new introductions are made possible by Thermo Fisher’s ever-growing research budget. In 2012, the firm spent $376 million on R&D, up about 11% from the year before and more than 50% higher than in 2009.

The 2012 research budget was about 3% of Thermo Fisher’s sales, but the firm spent closer to 5% of sales on new product development if its distribution and repair business is excluded from the calculation, Casper points out. The company is planning to spend about $400 million on R&D this year, he says.

The firm also emphasizes the ability to leverage its portfolio of instruments and services in emerging markets. Asia-Pacific sales represented 17% of the company’s 2012 revenues, Casper told investors during a recent conference call, up 2% from the year before. Revenues from China alone grew 22% to $700 million last year. 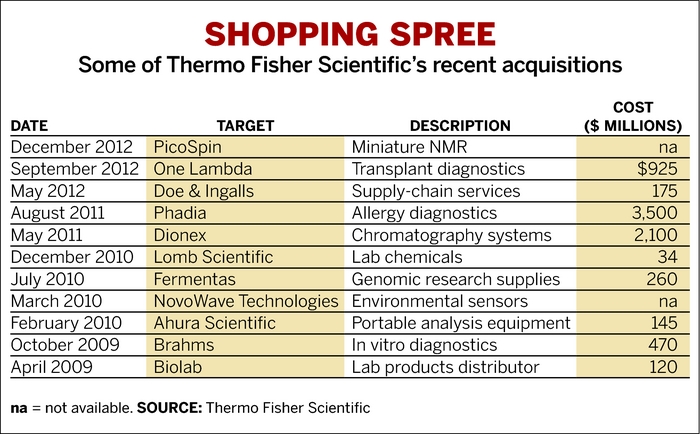 India, Russia, and Brazil are also strong emerging markets, Casper tells C&EN. In addition, Latin America is providing good sales growth for the company. These emerging markets help counter the “headwinds” Thermo Fisher expects from the sequestration of federal research funds in the U.S. and the lack of growth in Europe, which is still dealing with the sovereign debt crisis.

Despite Casper’s protestations, though, many investors view Thermo Fisher as a serial acquirer. Last year alone the company spent at least $1.1 billion on acquisitions. The largest purchase was of diagnostics firm One Lambda, which it bought for $925 million.

Acquisitions such as these put Thermo Fisher in a position to “capture a greater percentage of wallet from any one customer,” says Tony Butler, a stock analyst with the investment firm Barclays Capital. Thermo Fisher has been successful at acquiring premier brands and using its geographic reach to take them into new markets. “Thermo wants to be a Walmart for consumers and users of analytical products and services,” Butler says.

Thermo Fisher Scientific At A Glance

Because of his background, Casper understands consolidation in the scientific instrumentation business, Butler says. Casper joined Thermo Fisher in 2001 from sample preparation firm Kendro Laboratory Products, where he was CEO. Thermo Fisher ended up buying Kendro in 2005. Before Kendro, Casper was an executive at Dade Behring, a clinical diagnostics firm. Siemens bought Dade Behring in 2007.

And Thermo Fisher’s ability to leverage its distribution channels to increase sales of a new business can convince the leaders of its acquisition targets to join forces with Thermo Fisher, Butler observes. Other firms, such as chromatography expert Waters Corp., make fewer acquisitions and grow more organically, Butler says.

Most of Thermo Fisher’s acquisitions work out, but they take a long time to achieve a good return, notes Tim Evans, a senior analyst who follows Thermo Fisher for Wells Fargo Securities. And because Thermo Fisher makes so many more acquisitions than its competitors, “the firm’s return on invested capital is the lowest in the industry,” Evans says.

Thermo Fisher reports that its return on invested capital was 9.3% in 2012, up from 9.2% in the previous year. Agilent generally reports returns in the high teens, Evans notes, and Waters’ returns are frequently north of 25%.

Thermo Fisher clearly has the ability to achieve strong growth “organically,” Evans says. He points to its development of products based on Orbitrap, a fast and accurate liquid chromatography/mass spectrometry analysis system. In this industry it is difficult for companies of Thermo Fisher’s size to develop a single technology that “moves the needle” and has an impact on earnings. “But this one did,” he says.

When Thermo Fisher held an investor day with analysts in May 2012, it made a commitment to improve its return on capital. And although it did not promise to forgo large acquisitions, it did signal a cautious approach.

“If there are good opportunities, we’ll pursue them, and if there are opportunities that don’t meet our criteria, we clearly won’t,” Casper told analysts that day. “And like always, we look at lots of things, but we are extraordinarily selective on what we pursue.”

For Thermo Fisher, such good opportunities included Brahms, an in vitro diagnostics company, which it acquired in 2009, as well as allergy diagnostics firm Phadia, purchased in 2011, and One Lambda, a transplant diagnostics provider, bought in 2012. Thermo Fisher spent $4.9 billion on those three deals alone.

The demographics of an aging population make the three diagnostic acquisitions a smart move, according to Casper. Although government cost-cutting efforts may conspire to limit health care reimbursements in the future, diagnostics are “well protected,” Casper says, because of their role in helping to limit unnecessary medical procedures.

Life also bought Navigenics, a personalized genetics testing company. In addition, Life is a large provider of laboratory supplies for genetic research, a business that could complement Thermo Fisher’s own service and distribution businesses.

Although Casper won’t comment on Life Technologies, he insists that “we’ve built up the portfolio that we want” in diagnostics. Specialty diagnostics now account for more than 20% of the firm’s revenues.

Looking ahead, Casper says Thermo Fisher is likely to see revenue grow between 2 and 4% in 2013, excluding any acquisitions, bringing sales to about $13 billion. On the other hand, if the sequestration of U.S. federal research funds lasts through the end of the year, it could knock 2013 sales down by about 0.5%. “That’s not huge, but it’s material,” he says.

Academic researchers have been anticipating the sequestration for more than a year, Casper notes, so sales to the academic community have already slowed somewhat. “We’re helping academic customers choose the right products and services without sacrificing quality,” he says. Whatever happens in Washington, D.C., Thermo Fisher will invest heavily in R&D, push further into emerging markets, and use its size to increase market share, Casper says.

Given the economic uncertainties ahead, he isn’t ready to predict Thermo Fisher’s sales five years from now. But the firm will focus on organic growth, which Casper says ought to be in the 4 to 6% range. Meanwhile, over the past few years Thermo Fisher has posted average annual sales growth of 7 to 8%. “That growth rate is not a bad proxy for the long term,” he says.

The gap between organic growth and Thermo Fisher’s historic growth rate leaves room for small, easily absorbed acquisitions. Whether there’s room for an acquisition as large as Life Technologies is anyone’s guess. ◾