Intriguing, discrete species with atom-mimicking properties may lead to new catalysts or materials 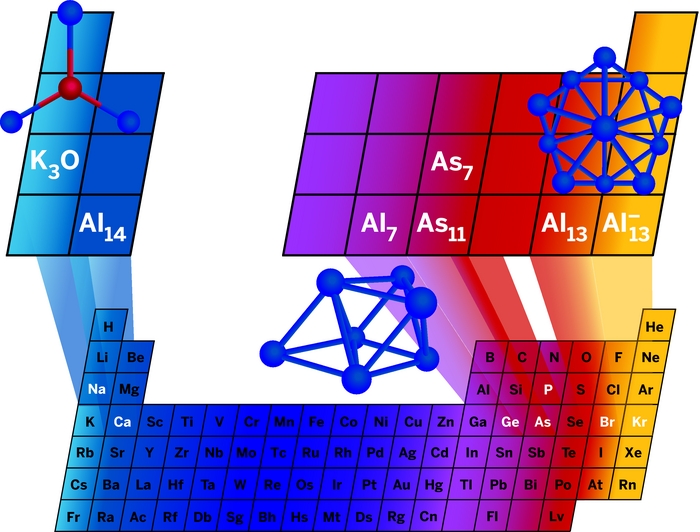 Mild-mannered atoms go about their business, perhaps transferring a few electrons or assembling into molecules. But in some cases, when they gather into superatom structures such as clusters or dendrimers, atoms can garner newfound powers.

Superatoms are stable assemblies of atoms or molecules that create discrete new species with unique atomlike properties; examples are inorganic clusters or dendrimers. “It’s not just the sum of the pieces,” says Donald A. Tomalia, founder and chief executive officer of NanoSynthons in Mount Pleasant, Mich.

Much as an atom retains its integrity when bound into a molecule, superatoms retain their integrity when they undergo reactions or are used as building blocks for other materials. Understanding superatomic behavior could lead not only to a better understanding of nanostructures but also ultimately to periodic-table-like maps of properties that could point the way to new catalysts, materials, or other applications, researchers say.

One example of a superatom is the cluster Al13–. The combined cluster orbitals somewhat mimic atomic orbitals, and the 40 valence electrons completely fill a shell. The end result is that Al13– behaves like a noble gas. Remove an electron to make Al13, and the species behaves like a halogen. And when the Al13 cluster is reacted with HI, I– adds to the cluster to form Al13I–, as discovered in 2004 by a group led by Pennsylvania State University chemistry professor A. Welford Castleman Jr. and Virginia Commonwealth University physics professor Shiv N. Khanna (Science, DOI: 10.1126/science.1093902).

Inorganic cluster superatoms get their unusual properties because their valence molecular orbitals are similar to the atomic orbitals of the elements they mimic, making them what Castleman calls electronically isovalent with one another. He points to ZrO– and NbN– as examples of super­atoms that are isovalent with Pd–. Despite their different elemental compositions, the three species have similar electronic properties, as determined by photoelectron spectroscopy. The similarity is preserved when oxygen is added to form PdO– and ZrO2– or PdO+ and ZrO2+.

Inorganic superatoms like these are able to catalyze reactions, and Castleman believes that inexpensive superatom-based materials could potentially replace Pd catalysts in combustion engines or other applications. The chemistry of such clusters “matches almost identically” with that of Pd catalysts, says Castleman, who has been investigating the reactivity of these and larger isovalent systems.

Castleman and Khanna have also worked with As73– clusters as stable, phosphorus-like superatom building blocks for cluster assemblies by linking them together with lithium, potassium, rubidium, and cesium. The assemblies are semiconductors, and depending on the elements and structures that the researchers use, they can tune the band gap—the energy difference between the top of the valence band and the bottom of the conduction band—for potential electronics applications. Superatom building blocks and linkers, including organic ligand linkers, can be varied in a host of ways to design superatom assemblies with customized properties, Khanna says.

In a recent study, he worked with Kit H. Bowen Jr. of Johns Hopkins University to prepare magnetic superatoms VNa8 and VNa7–, which mimic manganese atoms, and VNa8– and VNa9, which resemble chromium (J. Am. Chem. Soc., DOI: 10.1021/ja400830z). The strong spin magnetic moments of the clusters suggest they could be used in spintronic devices that store information using electron spins rather than charges. One big holdup in using inorganic cluster superatoms in applications is synthesis, Khanna says. Although superatoms by definition are stable, right now they are largely made in small quantities in the gas phase using laser vaporization techniques. Much work still needs to be done to develop ways to prepare them in quantity.

Another aspect of superatoms that intrigues Castleman is the question of which elements or clusters can form superatoms and which can’t. So far, it appears that elements with s, p, and d orbitals can hybridize effectively to form superatoms. But those with f orbitals don’t seem inclined to form superatoms. “I don’t know if we just haven’t hit the right system yet,” Castleman says, but he’s puzzling over it and says theoreticians are starting to become interested in the problem.

Metal clusters, along with nanocrystals, nanoparticles, fullerenes, and carbon nanotubes, are what Tomalia calls “hard” superatoms. On the organic, or “soft” side, he notes that dendrimers, nanolatexes, polymeric micelles, proteins, viral capsids, and even RNA and DNA can have properties that make them act like superatoms. While Castleman and Khanna look to the valence electrons of a cluster as defining a super­atom’s reactivity, Tomalia sees superatom behavior in soft assemblies as defined by size, shape, flexibility, and particular types of surface chemistry.

Dendrimers are one example. A dendrimer is a repetitively branched molecule that typically forms a symmetrical, spherical morphology around a core. Dendrimers are synthesized in onionlike layers of branching cycles; the layers are called generations. Tomalia likens a dendrimer’s core to an atomic nucleus and its generational layers to electron shells. If a generation is complete and the outer shell of a dendrimer is completely functionalized, then it can be inert. If the outer generation is incomplete and a branch is missing, however, the dendrimer is likely to dimerize in a superatomic manner, akin to two chlorine atoms forming Cl2.

As he outlined in a 2010 paper, Tomalia proposes that different stoichiometries of hard/hard, soft/soft, and soft/hard nanocompounds can eventually be used to develop new materials with unique properties (Soft Matter, DOI: 10.1039/b917370f). Nature already does this, he says, by incorporating well-defined assemblies of proteins and genetic material in simple virus capsids.

Just as the emergence of the periodic table in the 1800s allowed chemists to predict properties and structures of elements and molecules, so in time may superatom research lead to better predictability and design of properties in nanostructures. “In the chemistry world there’s a renaissance in stoichiometric nanosynthesis,” Tomalia says.

Ionic Liquids
Chemistry in Pictures: Papa’s got a brand new solvent
Materials
Fluorescent materials are the brightest ever made
Biomaterials
Fruit’s metallic blue caused by lipid nanostructures
Share X
To send an e-mail to multiple recipients, separate e-mail addresses with a comma, semicolon, or both.
Title: Developing Superatom Science
Author: Jyllian Kemsley
Chemical & Engineering News will not share your email address with any other person or company.