[+]Enlarge
Credit: Andrew Perkowski /J. Am. Chem. Soc.
“You can screw this into a regular light socket,” Nicewicz said of the floodlight that powers his lab’s reactions. 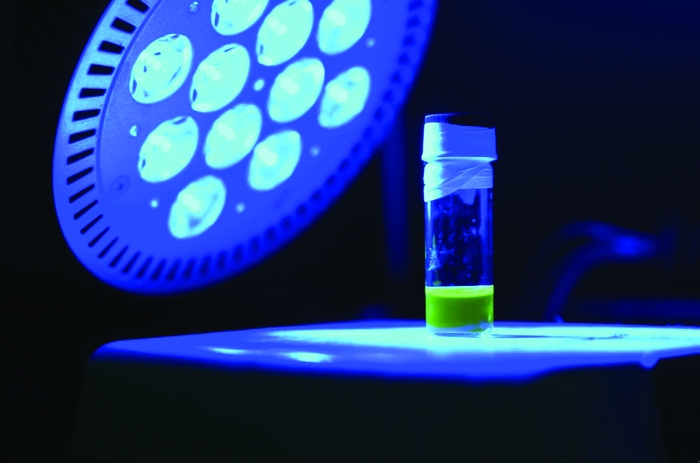 Credit: Andrew Perkowski /J. Am. Chem. Soc.
“You can screw this into a regular light socket,” Nicewicz said of the floodlight that powers his lab’s reactions.

Small molecules with a carbon-carbon double bond—alkenes—are starting points for chemicals in products such as paints and flavorings. But many ways to modify alkenes are energy intensive or depend on costly metal catalysts. Neither issue plagues new chemistry from a University of North Carolina, Chapel Hill, team. The researchers presented their work at the American Chemical Society’s national meeting in New Orleans.

The chemistry is still at an early stage, said David A. Nicewicz, who led the project. Instead of a metal, it uses a pair of organic molecules as the catalyst: a commercially available acridinium salt and 2-phenylmalono­nitrile. Harnessing light from a low-energy 15-W light-emitting diode lamp, the catalyst transforms an alkene into a cation radical. It’s possible to add “a whole slew” of motifs to the alkene from there, Nicewicz said.

At a session in the Division of Organic Chemistry, graduate students David S. Hamilton and Tien M. Nguyen presented examples using alcohols (J. Am. Chem. Soc., DOI: 10.1021/ja309635w). They then described a fresh success adding carboxylic acids and amines to alkenes: Replacing 2-phenylmalononitrile with thiophenol improved reaction times to about 15 hours, whereas previously the reactions took up to three days. 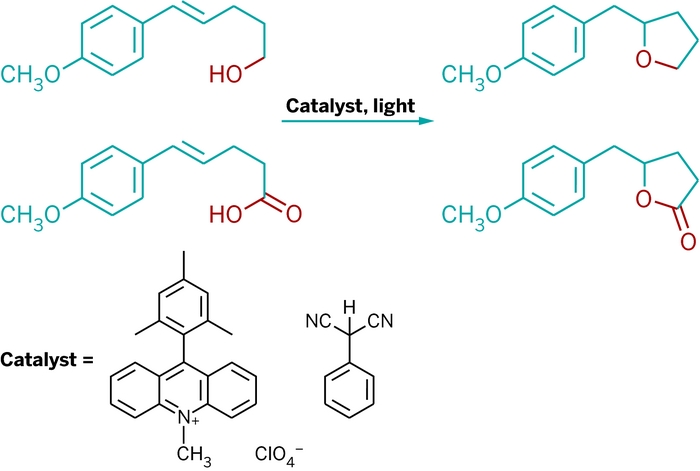 Nicewicz said the method circumvents a classic chemistry tenet—Markovnikov’s rule, which dictates the outcome of adding molecules to alkenes. It’s possible to break the rule, but it’s uncommon for catalyst-driven chemistry, points out Guangbin Dong of the University of Texas, Austin, who has also worked in the area. Dong, who did not attend the meeting, calls Nicewicz’ approach “beautiful, with very mild reaction conditions.” Thus far, the reactions have used di- or trisubstituted alkenes, but he’d like to see the team accomplish the reaction on monosubstituted alkenes, which is more challenging but more rewarding chemistry.

“The chemistry we’ve described here isn’t going to be commercialized tomorrow,” Nicewicz said. He and his coworkers will be trying to broaden its scope. Someday, he’d love to see this work used to make isobutyl alcohol, a commodity chemical and promising fuel, from just an alkene and water. “But for now we can get people thinking about a classic problem in a new way,” he said.