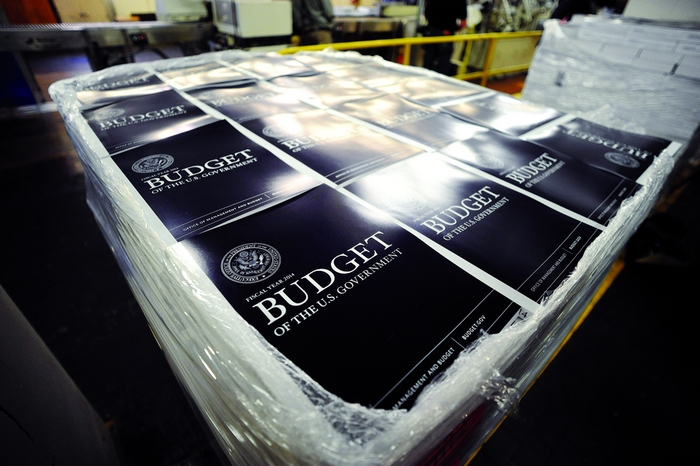 Credit: Newscom
The President’s budget request was released on April 10.

President Barack Obama last week released his fiscal 2014 federal budget request. The plan was nearly 10 weeks late and did not include budget numbers from fiscal 2013 for comparison—a handicap for the throngs of people who analyze each year’s numbers for Congress, advocacy groups, and other stakeholders.

But the President’s request continues a commitment to strong investment in R&D at agencies that conduct and/or fund scientific research. For overall federal R&D, the request provides $142.8 billion, a 1.3% increase from 2012, the year the Administration uses for a baseline.

“If we want to keep rebuilding our economy on a stronger, more stable foundation, then we’ve got to get smarter about our priorities as a nation,” the President said on April 10 when announcing his budget proposal. “And that’s what the budget I’m sending to Congress today represents—a fiscally responsible blueprint for middle-class jobs and growth.”

The President’s proposed budget would wipe out sequestration—the automatic, across-the-board spending cuts that kicked in on March 1—by reducing the budget deficit by almost $2 trillion over the next decade. It also reduces the discretionary budget—which funds all R&D agencies—as a percent of the nation’s economy to levels not seen since the Eisenhower Administration. However, the Administration says it has done so with strategic choices for where it spends and where it cuts. 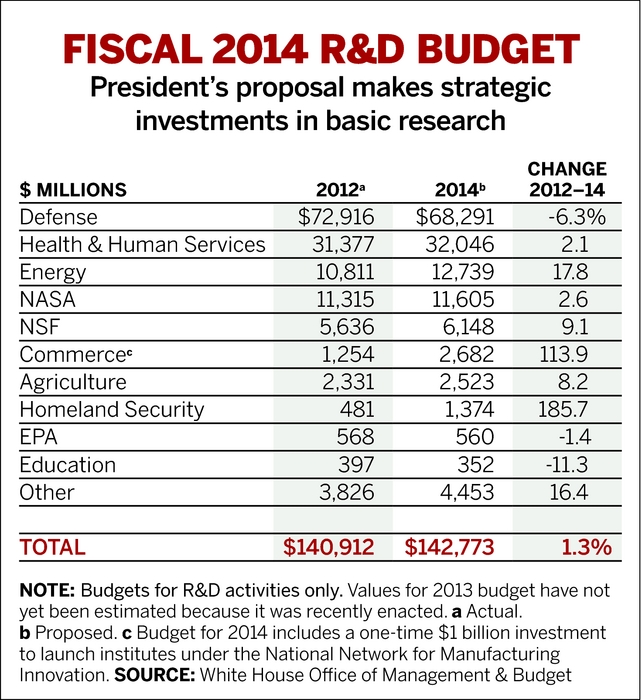 As in recent years, three science agencies the Administration considers key to the nation’s competitiveness are slated for budget increases. The President’s request calls for an 8.4% increase over 2012 for NSF, bringing its total budget to $7.6 billion in 2014. For the Department of Energy’s Office of Science, $5.2 billion is requested, some 4.4% above 2012 levels. And for NIST, $754 million, a nearly 21% jump from 2012 funding, is slated for the intramural labs.

The President’s plan also provides $2.9 billion for advanced manufacturing R&D. This includes a one-time investment of $1 billion through NIST to set up a network of 15 manufacturing innovation institutes in a National Network for Manufacturing Innovation.

The President’s budget request comes after both the House of Representatives and the Senate have passed their own budget blueprints for 2014, making it unclear what effect the delayed request will have on the budget process. Congress, which will ultimately decide the 2014 appropriations, has had mixed reactions. Democrats, in general, support the proposal, while Republicans do not.

House Speaker John A. Boehner (R-Ohio), says the President’s plan does show positive movement on entitlement reform, but it is not a balanced budget. The Senate’s top Republican, however, went further, calling the budget a repeat of past budget requests. “We’ve had enough of those the past few years,” said Sen. Mitch McConnell (R-Ky.). “We need a serious, reform-oriented budget.”

Pollution
Measuring microplastics in seafood
Persistent Pollutants
US FDA sets voluntary arsenic limit in infant rice cereal
Persistent Pollutants
Goodbye to some PFAS in food packaging
Share X
To send an e-mail to multiple recipients, separate e-mail addresses with a comma, semicolon, or both.
Title: Obama Pledges Support For R&D
Author: Susan R. Morrissey
Chemical & Engineering News will not share your email address with any other person or company.

Comments
Chad Brick (April 11, 2013 8:17 PM)
"But the President’s request continues a commitment to strong investment in R&D at agencies that conduct and/or fund scientific research. For overall federal R&D, the request provides $142.8 billion, a 1.3% increase from 2012, the year the Administration uses for a baseline."

In other words, a cut in real inflation-adjusted dollars, with further cuts likely by the time the House pushes for even lower spending.

Folks, we have the third lowest overall taxes of the thirty-four OECD nations. We are getting what we pay for.
Reply »

These are good steps to solve in future energy demand.
Reply »

James Rusling (April 17, 2013 1:17 PM)
The EU Parliament debated this spring whether to increase the future European Research Council budget by 73% or by a slightly lesser amount. US planned increase is 1.3%; are we falling behind?
Reply »