Natural Products: Shortened synthesis could lead to drug candidates based on the compound 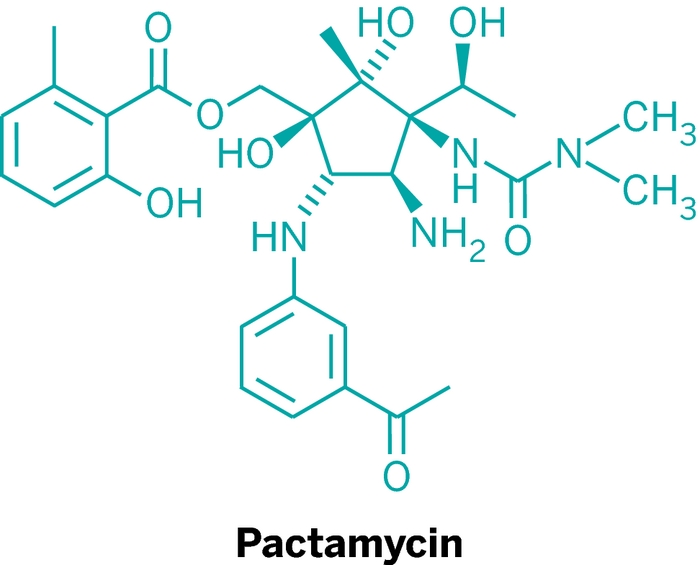 The potent natural product pactamycin has antitumor, antimicrobial, antiviral, and anti­protozoal properties. It could be a great drug if it weren’t also toxic to people. Now the compound has been prepared via a new route that slashes the number of reactions required to make the molecule by more than half (Science, DOI: 10.1126/science.1234756) and suggests a way to make analogs that overcome its toxicity.

Pactamycin was first isolated from the bacterium Streptomyces pactum in 1961. The compound’s power against cancer cells and dangerous bacteria comes from its ability to disrupt early steps in protein synthesis. Unfortunately, it does this in mammalian cells as well. Researchers have recently used biosynthetic means to prepare small amounts of pactamycin analogs that are less toxic to mammalian cells but capable of killing the protozoan parasites responsible for malaria and African sleeping sickness.

By spotting a hidden symmetrical structural element in pactamycin, Jeffrey S. Johnson, Justin T. Malinowski, and Robert J. Sharpe of the University of North Carolina, Chapel Hill, were able to devise a short 15-step synthesis of the compound.

“If you squint really hard on the northeast corner of the molecule, you can see a potential simplification,” Johnson explains. “We decided to see if we could start with a simple symmetrical starting material, tack on some useful functionality, and then break its symmetry somehow.” This desymmetrization approach is not a new idea, Johnson points out, but he thinks that this pactamycin synthesis is one of the more ambitious applications of this strategy.

Stephen Hanessian, the University of Montreal chemist who was the first to prepare pactamycin via a 32-step synthesis in 2011, calls the work elegant. The new route, he says, “takes inspiration from key steps in an existing synthesis while adding efficiency, new methodology, and personal creativity.”