FRIENDLY AMPHIPHILE
[+]Enlarge
Credit: Courtesy of Bruce Lipshutz
Lipshutz poses with a schematic drawing of one of his designer nanomicelles. 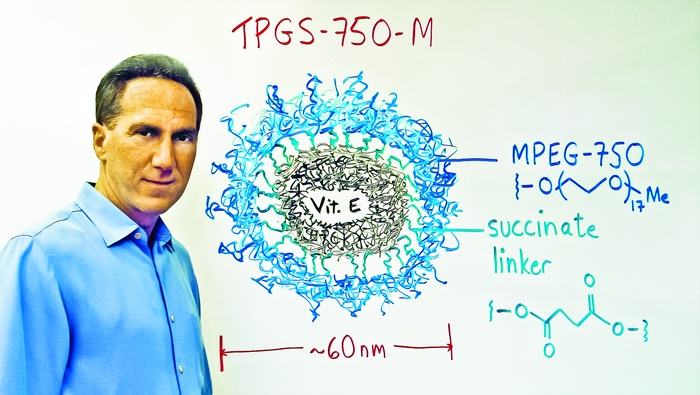 Credit: Courtesy of Bruce Lipshutz
Lipshutz poses with a schematic drawing of one of his designer nanomicelles.

When Bruce H. Lipshutz said he had a goal to help the synthetic organic chemistry community get organic solvents out of organic reactions, he wasn’t kidding. The University of California, Santa Barbara, chemistry professor had been quizzing process chemists in industry about the most common reactions they use and what they would like to do to improve the cost and environmental profiles of the processes—that is, how to make them greener and more sustainable. One of the biggest obstacles, they said, was organic solvents.

That bit of information led Lipshutz and his research group to develop a class of low-cost designer surfactants. These amphiphilic molecules form nanomicelles, which act as reaction compartments. They enable common transition-metal-catalyzed organic reactions to run in water at production scale at room temperature. For his efforts, Lipshutz received a Presidential Green Chemistry Challenge Award in 2011.

Lipshutz has now moved on to the next phase of his goal: convincing the organic synthesis community how powerful his approach can be and challenging chemists to do better when it comes to making their reactions greener.

To do that, the Lipshutz group has systematically compared the surfactant-based technology with traditional reactions for preparing key drug intermediates in organic media, as reported in the literature by pharmaceutical companies. Lipshutz presented the unpublished results of the comparative studies for the first time during a symposium on advances in green chemistry sponsored by the Division of Organic Chemistry at the American Chemical Society national meeting in New Orleans.

Lipshutz and his colleagues evaluated the reactions on the basis of their E factors, one of the measures organic chemists use to determine the greenness of a reaction. E factors are derived from the amount of solvents, reagents, and consumables used per kilogram of product made, Lipshutz explained. The higher the E factor of a chemical process, the more waste it generates, the greater its negative environmental impact, and the less sustainable it is. In most cases, using the nanomicelles reduces E factors by more than an order of magnitude, he said, while at the same time requiring less catalyst and improving yields.

“This is a really nice piece of work,” organic chemistry professor Roger A. Sheldon of Delft University of Technology, in the Netherlands, told C&EN. “It is cutting-edge research that furthers the goals of green chemistry and sustainable technologies.”

It was Sheldon who formally introduced the concept of E factors in 1992. From his experience at the Dutch company DSM in the 1980s, he knew firsthand how inefficient fine chemical synthesis could be. He wanted to share that knowledge with his students and inspire them to do something about it.

E IMPROVEMENT
[+]Enlarge
Running this Suzuki-Miyaura coupling reaction in a micellar solution using TPGS-750-M, a designer surfactant, improves the yield and significantly reduces the environmental profile, or E factor, of the reaction.

Running this Suzuki-Miyaura coupling reaction in a micellar solution using TPGS-750-M, a designer surfactant, improves the yield and significantly reduces the environmental profile, or E factor, of the reaction.

Small-molecule pharmaceuticals have among the highest E factors in the chemical industry, in the range of 25 to 200. Fine chemicals used as drug intermediates and in flavors and fragrances aren’t far behind, with E factors of 5 to 50. Bulk chemicals such as propylene oxide and caprolactam typically have E factors less than 5; and petrochemicals such as polyethylene and gasoline, less than 0.1.

In fairness to the pharmaceutical industry, its syntheses require more reaction steps and higher purity products than those of other industries, which means more waste and higher E factors. Most of that waste is inorganic salt by-products and organic solvents, and many of the solvents are toxic.

In fact, organic solvent use accounts for approximately 80% of the waste generated during typical pharmaceutical processing, according to John L. Tucker, a senior scientist at Amgen and the company’s representative to the ACS Green Chemistry Institute’s Pharmaceutical Roundtable. The roundtable is a group of pharmaceutical companies that have banded together to encourage innovation while catalyzing the integration of green chemistry and green engineering in the pharmaceutical industry.

“The roundtable views developing alternatives to traditional organic solvents as a critical step toward safer and more sustainable pharmaceutical manufacturing,” Tucker said. “Lipshutz’ transition-metal cross-couplings performed with micellar catalysis in water demonstrate that a proliferate class of reactions can be performed in a benign environment and can provide a significant reduction in total process waste. His direct comparison between published pharmaceutical cross-coupling exemplifies a more efficient and environmentally superior methodology that is truly transformative.”

In New Orleans, Lipshutz described how the designer surfactants are made from environmentally benign ingredients: racemic α-tocopherol (vitamin E), succinic acid, and polyethylene glycol. When the surfactants are added to water, they form the nanomicelles, which function as reaction compartments. The lipophilic vitamin E orients toward the center of the nanomicelles, and the hydrophilic polyethylene glycol orients toward the water. These two components of the surfactant are linked by the succinic acid.

Similar surfactants have been used for decades in organic and aqueous chemical processes, Lipshutz said. But no one thought to design a surfactant specifically for transition-metal-based catalysis. “What organic chemists seem to have missed is that the lipophilic part on the inside functions as a solvent, and solvent effects in organic chemistry can make a huge difference in the success or failure of reactions.”

Spherical nanomicelles in the 50- to 100-nm-diameter range best accommodate the flux of reactants, catalyst-ligand system, and product into and out of the micelles, Lipshutz noted. The high concentration of molecules within the micelles leads to increased reaction rates, which dispense with the need for heating and help reduce side products. Micelles formed from traditional surfactants have smaller diameters, only about 10 to 15 nm, he noted. The smaller size appears to lessen the binding of reactants and catalysts, which hints at why the enhanced reactivity hasn’t been observed in the past, Lipshutz believes.

Lipshutz’ group has tested the designer surfactants—which are now commercially available—in dozens of side-by-side comparisons of standard metathesis, cross-coupling, addition, and other reactions. For example, Heck coupling of 3-bromoquinoline with ethyl acrylate using a palladium catalyst in dimethylformamide solvent at 140 °C produces an unsaturated ester with an E factor of 137. The same reaction carried out in the micellar system at room temperature results in an E factor of only 7.5.

But there’s more. Another advantage of the micellar catalysis is that the organic product can be extracted by adding a small amount of a recoverable, relatively benign solvent such as diethyl ether or ethyl acetate. The surfactant remains in the water in the reaction vessel and can be used over and over again. A single recycle of the micellar medium can result in significant reduction of wastewater and further lowering of the E factor compared with traditional reactions, Lipshutz said. The only contribution to the E factor in that case is the small amount of solvent needed to remove the product.

Hu envisions that the micelle technology could help push automated synthesis in drug discovery to achieve higher efficiency and throughput, a priority for Lilly scientists (C&EN, Nov. 26, 2012, page 12). “It could change the way of synthesizing organic molecules in the future,” Hu said.

“This versatile and powerful methodological advance is garnering a great deal of attention from the pharma industry,” added Lawrence G. Hamann, executive director of global discovery chemistry at Novartis Institutes for BioMedical Research. “Pharmaceutical researchers are collectively striving for greener methods, catalyzed in part by consortia such as the Pharmaceutical Roundtable. The Lipshutz group’s chemistry is redefining what is possible in an aqueous reaction mixture and will be transformative to the pharma industry’s synthetic processes.”

Synthesis
Micellar Reaction System Proven On Kilogram Scale
Synthesis
A Little Palladium Does A Lot Of Cross-Coupling
Environment
Living Up To The Process Challenge
Share X
To send an e-mail to multiple recipients, separate e-mail addresses with a comma, semicolon, or both.
Title: Reducing Environmental Impact Of Organic Synthesis
Author: Stephen K. Ritter
Chemical & Engineering News will not share your email address with any other person or company.

Comments
Prarthana Devi (October 19, 2013 12:25 AM)
TPGS-750M does wonder to my reaction (1,4-conjugate addition to enone). I am really happy. Now I am looking for an enantio-selective version of this using TPGS.
Reply »