It is a critical time for scientists to educate policymakers about the importance of research, former congressman says

[+]Enlarge
Credit: Cheryl Hogue/C&EN
Porter is a lawyer like his father, whose portrait hangs in his office, but chairs Research!America, a science advocacy group. 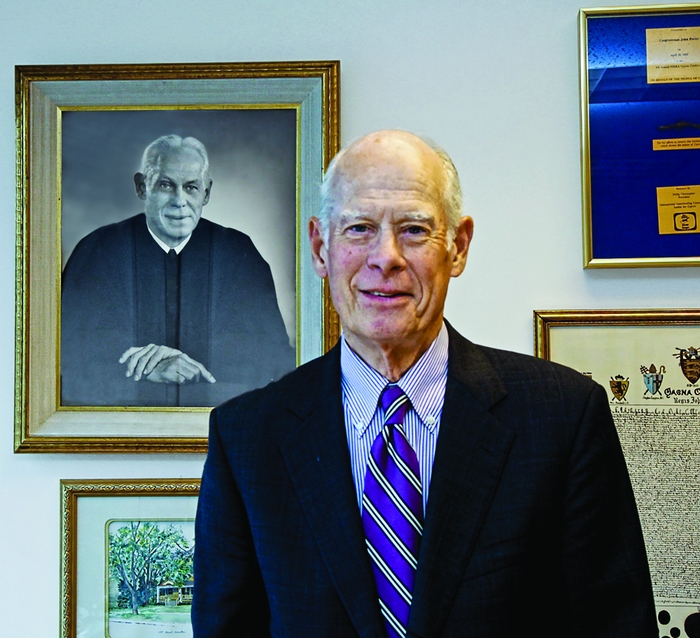 Credit: Cheryl Hogue/C&EN
Porter is a lawyer like his father, whose portrait hangs in his office, but chairs Research!America, a science advocacy group.

When John Edward Porter enrolled in Massachusetts Institute of Technology in 1953, he planned on becoming a scientist or engineer. But at the end of his freshman year, Porter had a change of heart and opted instead to follow in the footsteps of his father, an elected state judge. And so he became a lawyer. But he never lost his love for science.

Porter’s interest in science continued and evolved into political support for federally funded research while he served as a U.S. congressman from Illinois for more than two decades. During his tenure in the House of Representatives, Porter chaired a subcommittee appropriating money to federal health agencies.

After he left Congress in 2001, Porter, now 77, went back to lawyering. He’s a partner in the Washington, D.C., office of Hogan Lovells, a high-powered international law firm. But Porter continues to push for federal support of science as chair of the board of directors for Research!America, a nonprofit group focused on making research to improve human health a higher priority for the U.S.

“This economy is never going to grow in the way it’s capable of unless we emphasize science, technology, and research,” Porter tells C&EN.

With the current political and financial state of the nation, Congress is losing sight of the importance of science, says Porter, who is a moderate Republican—a subspecies of politician he calls “a museum piece.” Thus, it’s up to scientists to demonstrate to the public and politicians alike why science is essential to the future of the U.S.

Those who toil in laboratories, invent new molecules or technologies, crunch data, or otherwise do science are the best people to do this outreach, Porter says. Polls show the public respects scientists. Although scientists may not be aware of the power they hold to sway public opinion, people listen to them, Porter says.

Outreach is a novel activity for most scientists and not a task most take to naturally, he acknowledges. Plus, outreach didn’t seem necessary in recent decades because Congress was providing ever-growing federal support for scientific endeavors. “There was no pressure on scientists to make a case to Congress or the American public about the importance of science,” Porter says of those days.

But in 2001, the year Porter left Congress, federal funding for science began to flatten. Things have only gotten worse since then. Today the U.S. is facing an enormous deficit, and Congress is cutting federal spending to reduce the nation’s debt. Sequestration—automatic, across-the-board federal spending cuts that went into effect on March 1—is further shrinking the federal investment in R&D. “I think things are in critical condition,” he says.

“Scientists better start engaging and convincing the public about the importance of science and reaching out to policymakers,” Porter says. “You’ve got to get out of your comfort zone.”

Scientists don’t need to ask Congress for money, Porter emphasizes. Instead, they should continually educate their elected officials about the importance of science to keep the U.S. a world leader into the future, he says. He points out that only a handful of elected officials in Washington, D.C., have scientific backgrounds and deeply appreciate the benefits of scientific research.

Porter suggests a number of concrete ways scientists can carry this out. The simplest is to send an e-mail or a letter about a scientific issue to their elected representatives in Washington.

A more powerful technique is inviting a senator or a congressional representative to visit a research institution. “There’s nothing like seeing it,” Porter says. “They’ll be inspired.” During the visit, scientists can emphasize how the economy needs science to grow, he notes.

Scientists can also deliver this message, either alone or in the company of colleagues, in visits with members of Congress at their in-state offices or in Washington. Elected officials “will be happy to see you,” Porter explains.

Another effective method, he says, is for scientists to write op-ed pieces for local news media outlets on the importance of science education or funding. “All politics is local,” Porter says, explaining that such pieces often have more impact on members of Congress than do similar articles in the national media.

For a more challenging assignment, Porter says, scientists can volunteer to be on the science advisory board of a candidate running for state or national office. Because candidates often don’t have this sort of advisory panel, scientists can then offer to set one up. If the candidate wins, the panel can offer to continue advising on scientific matters once the candidate takes office. After volunteering in the campaign, Porter says, “you’ve got their ears.”

Porter also stresses that scientists should reach out to their local communities about the importance of science. This can involve speaking to a local service club about the work they do and why it’s important. Scientists also can talk about their work to students at a local public school. “Tell them how exciting it is,” he says, as a way to encourage more young people to pursue a career in science.

Despite his enthusiasm, Porter acknowledges that it’s a challenge to convince scientists to spread this message. “Trying to get scientists to impact policymakers is like trying to herd cats.”

Comment
Introducing ACS and chemistry to the 116th Congress of the US
Elections
For District I director: Laura E. Pence
Careers
Becoming a skilled advocate for chemistry
Share X
To send an e-mail to multiple recipients, separate e-mail addresses with a comma, semicolon, or both.
Title: John Edward Porter
Author: Cheryl Hogue
Chemical & Engineering News will not share your email address with any other person or company.