[+]Enlarge
Credit: Courtesy of Erika Ribechini
Researchers analyzed the chemical makeup of pills like these found in a 2,000-year-old ship that sank off the coast of Italy. 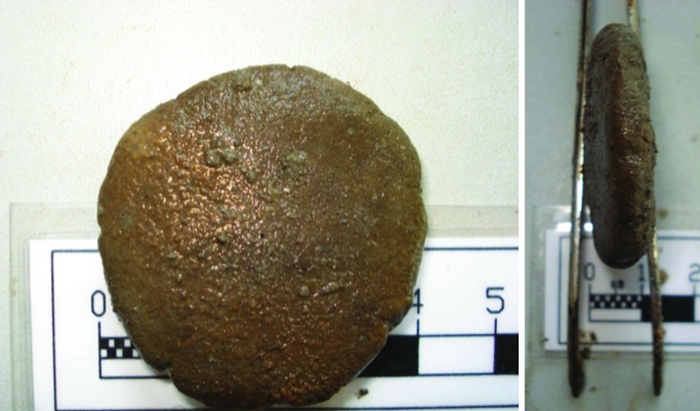 Credit: Courtesy of Erika Ribechini
Researchers analyzed the chemical makeup of pills like these found in a 2,000-year-old ship that sank off the coast of Italy.

Two thousand years ago, a Roman merchant ship containing medicinal supplies sank off the coast of the Tuscany region of modern-day Italy. Among the treasures that have been recovered are six pill-like tablets, stored in tin containers.

Now, chemical analysis has revealed the ingredients of those ancient health remedies, such as zinc, which has anti-inflammatory and other properties (Proc. Natl. Acad. Sci. USA, DOI: 10.1073/pnas.1216776110). The research provides rare insight into the health practices and medical culture of the Roman Empire.

The 4-cm-long tablets primarily contain hydrozincite and smithsonite, minerals laden with zinc, which has antibacterial and antiviral activity in addition to reducing inflammation, says Erika Ribechini, a chemist at the University of Pisa who led the research.

The ancient pills also contain pine resin, fatty molecules from animals and plants, as well as pollen. Also present in the tablets was beeswax. Ribechini says the wax may have served as an excipient, the material that provides a pill’s bulk and in which medicinal ingredients can be suspended.

Ribechini suspects the tablets were used to treat eye ailments. The Latin word for eyewash, collyrium, comes from a Greek word that translates as “small round loaves”—the shape of the tablets. Furthermore, zinc salts are still used today “for the treatments of dermatological and ophthalmic diseases,” she adds. The topical antibiotic cream Neosporin, for example, contains zinc.

Zinc is not the only metal in antiquity that may have been used to cure ophthalmological ailments, comments Philippe Walter, a cultural heritage chemist at the University of Pierre & Marie Curie, in Paris. “Ancient Egyptians used to add lead compounds to their makeup to treat eye illnesses,” he says. As with lead, Zn2+ ions could “stress the cells and cause them to make hydrogen peroxide, nitric oxide, and other compounds involved in the body’s immune response. Or zinc could directly kill eye-disease-causing bacteria on the skin or near the eye,” Walter adds.

It’s rare to find such an intact sample of an ancient medicine, Ribechini says of the tablets. Researchers interested in early medicines and cosmetics typically analyze trace residues at the bottom of antique vessels. In January 2012, for example, traces of nicotine were discovered in an ancient Mayan pot at the Library of Congress (C&EN, Jan. 23, 2012, page 29).

Comments
veigapaula (January 23, 2013 1:19 PM)
The authors should have consulted also the specialists at the Institute for Medical Traditions, Washington, DC...
Reply »

Ollie Sample (March 21, 2013 1:39 AM)
Even the Romans had experimented on different types of medicines to cure certain diseases. It can't be helped because in those times, there were frequent wars and fighting. People need to be in tiptop condition and free of illnesses. I am just amazed at how they were able to discover the properties of Zinc and other elements in curing eye diseases.
Reply »

Ippokratis (February 18, 2014 6:12 AM)
Roman Empire, ancient Egypt and ancient Mayan, and not even one reference in this abstract to the ancient Greeks. This is so suspicious!
Reply »