Changes Ahead For ACS Guidelines 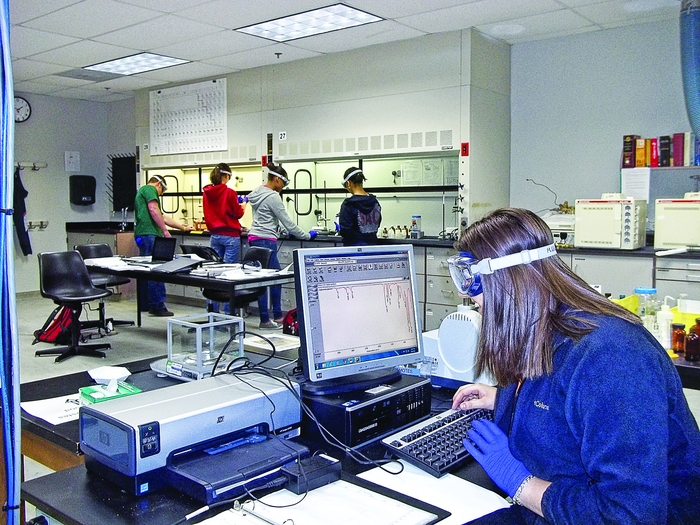 Credit: College of St. Benedict/St. John’s University
Students at the College of Saint Benedict separate and purify mixtures before characterizing them.

In 1940, the American Chemical Society published its first list of chemistry undergraduate programs certified to meet certain criteria. Those criteria, last revised in 2008, are once again up for review.

ACS’s Committee on Professional Training (CPT) develops the guidelines and reviews programs to determine whether they meet and remain in compliance with requirements related to faculty and staff, infrastructure, curriculum, undergraduate research, and student skill development.

The guidelines currently require students to take the equivalent of a one-semester foundation course in each of five chemistry subdisciplines: analytical, biochemistry, inorganic, organic, and physical. In addition, students are required to take at least four in-depth courses, as well as have at least 400 hours of lab experience.

The 2008 revisions allowed a more integrated approach to chemical education and introduced a level of flexibility that had not been permitted before. Because those guidelines were such a departure from previous versions, CPT anticipated it would need to revisit the guidelines rather soon to make sure they were working as hoped.

“We knew that we were going to need to come back in four or five years,” says 2013 CPT Chair Anne B. McCoy, a chemistry professor at Ohio State University.

Since January 2012, CPT members have been reviewing the guidelines and gathering input from the chemistry community in preparation for the next set of revisions, which are slated for release in spring 2014. A report detailing the proposed revisions is now available on the CPT website (www.acs.org/cpt).

◾ Increase minimum number of full-time faculty from four to five

◾ Require that lecture courses leading to certification be taught by full-time, permanent faculty

◾ Require that certified majors have a capstone experience

◾ Require student exposure to at least one instrument from each of the following groups: optical atomic spectroscopy, optical molecular spectroscopy, mass spectrometry, separations, and electrochemistry

◾ Require that the department have an active safety committee

“We don’t anticipate making major changes to what the curriculum looks like,” McCoy says.

Among the proposals, she notes, is one addition: a capstone experience. But that experience is broadly defined. The one requirement is that the capstone integrate the student skills outlined in the guidelines.

Jeffrey S. Moore, interim head of the chemistry department at the University of Illinois, Urbana-Champaign, worries that large departments like his may have trouble offering a capstone experience for all students seeking to earn an ACS-certified degree.

Illinois faculty can offer individual study courses in which they guide small groups of students doing literature research on a topic of current interest, he says. But such a course is difficult to scale up to the 100 or more chemistry majors who graduate from Illinois each year.

Beyond the capstone experience, most of the proposed revisions address matters related to departmental infrastructure, including faculty and instrumentation.

One change involves increasing the minimum number of full-time faculty members for an approved department from four to five. This proposed change would affect approximately 30 of the 670 approved departments. The increase in faculty was proposed for the 2008 revisions, but it was removed because of strong resistance.

Although flexibility was incorporated into the current guidelines, some chemistry department chairs think the guidelines still aren’t flexible enough. For example, a proposed change calls for students to have significant hands-on lab experience, such as a general chemistry course, before starting foundation lab courses.

“We don’t offer the equivalent of an introductory lab anymore,” says Henry Jakubowski, chair of the chemistry department at College of Saint Benedict & Saint John’s University, in St. Joseph, Minn. His department revamped its curriculum after the 2008 revisions, and students now start their foundation lab courses during their first semester.

The added flexibility also comes into play for some programs in which the requirement for biochemistry can make it difficult for some students to receive ACS-certified degrees. For example, in the chemistry department at the University of Minnesota, Twin Cities, which is part of the College of Science & Engineering, its students have a strong materials science bent.

“Many of our majors are not interested in biology,” says William B. Tolman, department chair at Minnesota. “They’re doing advanced solid-state chemistry, materials chemistry, and polymer chemistry, but they can’t get a certified degree because they didn’t take biochemistry. The ACS guidelines should be more flexible to enable programs to evolve in these directions.”

Some of the proposed changes are ones of emphasis, in particular when it comes to lab safety. For example, several guidelines are being changed from “shoulds” to “musts.” Among them is a proposal that every program must have an active safety committee.

“The ‘musts’ are deal breakers,” says Joel I. Shulman, a chemistry professor at the University of Cincinnati and former CPT member who is now a consultant to the committee. “If the guidelines say ‘must’ for something, and a program doesn’t do it, they are out of compliance, which can lead to probation.”

McCoy reiterates that CPT’s proposed changes are still just proposals. “Nothing is set in stone,” she says. “Everything is still open for discussion.”

Interested individuals have time to provide feedback, although CPT must receive their comments by Aug. 1 (see page 40). CPT expects that it will begin finalizing the new guidelines in October.

“I was encouraged that so many people were interested and concerned,” says Allan K. Hovland, a chemistry professor at St. Mary’s College of Maryland who attended the New Orleans symposium. It’s important for faculty to be aware of the proposed changes, he asserts, because those changes could have major impacts on their programs.

Education
How chemistry programs are moving beyond small molecules
Education
Oklahoma Revamps Chemistry Graduate Program
Careers
ACS Guidelines For Bachelor’s Degree Programs: Revisions Near Completion
Share X
To send an e-mail to multiple recipients, separate e-mail addresses with a comma, semicolon, or both.
Title: Changes Ahead For ACS Guidelines
Author: Celia Henry Arnaud
Chemical & Engineering News will not share your email address with any other person or company.