Synthesis of lanthanide(II) compounds may lead to other chemical transformations

Conventional wisdom among chemists has been that most lanthanide elements could exist in compounds only in the +3 oxidation state. Overturning that long-standing assumption, researchers have now synthesized complexes with lanthanide ions in the +2 oxidation state for the entire series, minus promethium. The new results could lead the way to new chemical transformations.

The work was done by a University of California, Irvine, group led by chemistry graduate student Matthew R. MacDonald and professor William J. Evans. They expect that promethium will mimic the new +2 chemistry of its periodic table neighbors, but their lab isn’t equipped to handle the radioactive element.

Alfred P. Sattelberger, associate laboratory director at Argonne National Laboratory, doubts that anyone familiar with the organometallic chemistry of lanthanides—which have valence electrons filling the 4f orbitals—anticipated the isolation and characterization of lanthanide(II) complexes for the entire series. “The synthetic chemistry is exceedingly difficult, and the results are stunning,” he says about the new work.

For decades, chemists believed that the only three lanthanide elements that could be isolated in the +2 state in complexes were ytterbium, europium, and samarium. With those three exceptions, textbooks “portrayed 4f elements as essentially uninteresting, with only a single +3 oxidation state and nearly indistinguishable chemical characteristics,” says David L. Clark, a research fellow and director of the National Security Education Center at Los Alamos National Laboratory.

Although the new lanthanide(II) complexes are not easy to make, Clark foresees that chemists will use them to explore new chemical reactions. These divalent lanthanides display a rich one-electron redox chemistry that generates unusual chemical transformations not observed for transition metals, he says.

Adding to ytterbium, europium, and samarium in the late 1990s were three more lanthanide(II) complexes that incorporated thulium, neodymium, and dysprosium. Some of the chemistry could be rationalized by the ions having stabilizing electron configurations—Yb2+, Tm2+, Eu2+, and Sm2+ have filled, nearly filled, half-filled, or nearly half-filled 4f orbitals. But the stability of +2 complexes of neodymium and dysprosium didn’t make any sense at all, Evans says, because they don’t have stabilizing electron-shell configurations. Nevertheless, researchers continued to assume that the remaining elements in the series would be too reactive to form stable complexes in the +2 oxidation state.

ELUSIVE
[+]Enlarge
Credit: J. Am. Chem. Soc.
Reduction by potassium and sequestering of K+ by 2.2.2-cryptand enables synthesis of lanthanide(II) complexes once thought too unstable to be isolated. 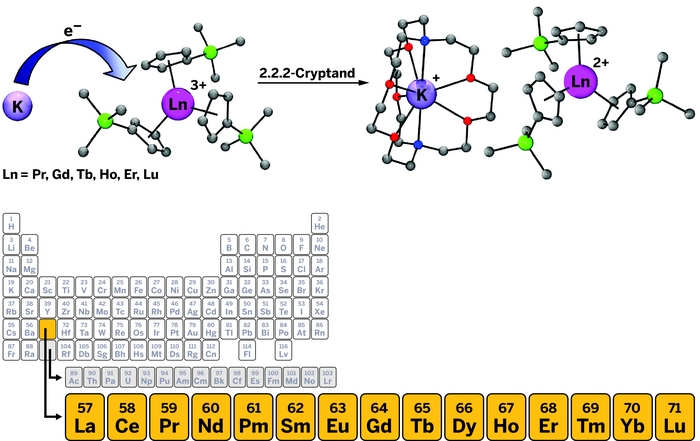 Credit: J. Am. Chem. Soc.
Reduction by potassium and sequestering of K+ by 2.2.2-cryptand enables synthesis of lanthanide(II) complexes once thought too unstable to be isolated.

They prepared the complexes first by reducing the Ho3+ compound Ho(C5H4Si(CH3)3)3 or the corresponding Er and Tb compounds using potassium graphite, KC8. KC8 is a form of graphite infused with potassium atoms and is a commonly used strong reducing agent in inorganic chemistry. A potassium atom donates an electron to the lanthanide(III) complex. The resulting K+ is sequestered by a crown ether, 18-crown-6, or similar ligand, to promote crystallization. The final product is an [(18-crown-6)K][Ho(C5H4Si(CH3)3)3] complex with the lanthanide ion in the +2 oxidation state.

MacDonald developed a flash reduction synthesis in which he packs KC8 into a column and chills it with other experimental apparatuses to –35 °C in a glove box under inert argon gas to protect the air-sensitive compounds. He then dissolves the starting lanthanide compound and 18-crown-6 in diethyl ether to form a yellow solution that turns dark maroon as it runs through the column and forms the product. The reaction takes less than 30 seconds, MacDonald says. The products are unstable in solution, so the key is to tune the solution concentration and column flow such that the product starts to crystallize as it comes out of the column and drops into a receiving flask.

MacDonald synthesized the remaining lanthanide compounds—Pr, Gd, and Lu, as well as some of the other lanthanides—by using 2.2.2-cryptand instead of 18-crown-6. In these cases, MacDonald used a more traditional synthesis approach in a flask at room temperature, albeit still in a glove box and working quickly to isolate the product within a few minutes.

The newest lanthanide(II) species are surprising not just because they exist but also because they appear to have a valence electron in a 5d orbital, rather than all in 4f orbitals, as scientists assumed. In the case of Lu2+ and Gd2+, the configuration makes sense because it yields a filled or half-filled 4f set of orbitals. For La2+, Ce2+, Ho2+, Er2+, Pr2+, and Tb2+, the researchers suspect that the greater radial extension of the 5d orbitals relative to 4f orbitals helps stabilize the complexes. Also, ligand effects could reduce the energy of one or more 5d orbitals compared with the 4f orbitals, which would also have a stabilizing effect. Going forward, Evans hopes to synthesize lanthanide(II) compounds with other ligands and geometries to try to tease out key properties that influence electron configuration.

The fact that his group was able to synthesize the compounds after others thought the field was settled is a lesson in questioning assumptions, Evans says. Scientists had thought they’d justified why most lanthanide(II) complexes couldn’t exist, and yet they can. He adds, “It’s really exciting to me to think about what other things in chemistry we think we can’t do but perhaps we can.”

Comments
David Karraker (June 22, 2013 3:52 PM)
Great Work Now how about spectra, Mossbauer on Eu (If I remmber corectly, Eu does M_) Both should be very interesting in respect electronic nature of the new rare earth +2 s
Reply »