Atmosphere: Feldspars found to be good seed for ice crystals in clouds

Mighty Mote
[+]Enlarge
Credit: Nature
Feldspars are a minor component of mineral dust, but they may outmuscle clay minerals in seeding ice crystals in clouds. 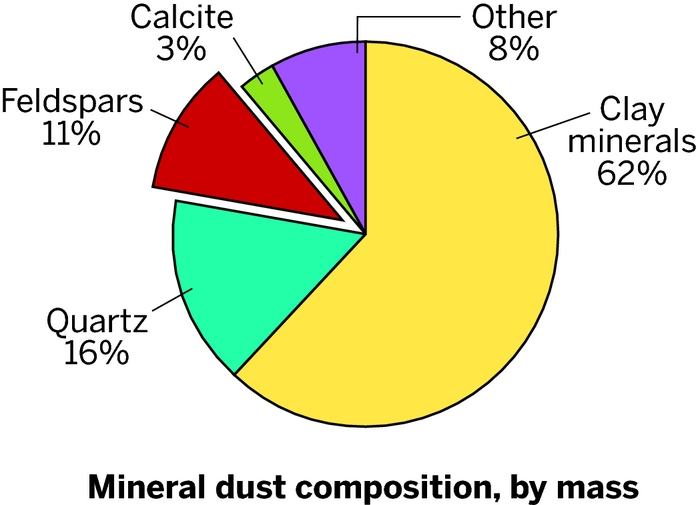 Credit: Nature
Feldspars are a minor component of mineral dust, but they may outmuscle clay minerals in seeding ice crystals in clouds.

In clouds, mineral dusts and other aerosols catalyze the freezing of water droplets into ice crystals. Scientists have long thought that clays, the largest component of mineral dusts, are the best ice nuclei among the subset of aerosols.

But now Ben Murray of the University of Leeds, in England, and coworkers report that silicates known as feldspars, a minor dust component, may be better than clay minerals at seeding ice formation in certain weather-influencing clouds such as stratus and storm clouds (Nature 2013, DOI: 10.1038/nature12278).

Ice formation determines several cloud properties, such as size, lifetime, precipitation potential, and ability to scatter radiation. Aerosols that seed ice formation therefore play an important role in climate and weather, and researchers factor ice nucleation into climate and weather models. But a dearth of data on the sheer variety of aerosols has made it difficult for researchers to know which are the best nuclei.

In the lab, Murray and colleagues infused micro­meter-size water droplets with different minerals and measured the temperatures needed to freeze half of the droplets in each group.

Major uncertainties and assumptions go into modeling dust emissions, particle size, and nucleation, which makes it tough to draw broad conclusions on real-world nucleation from this study, comments Ryan Sullivan of Carnegie Mellon University. And because past studies suggest clay minerals are the best nuclei, “I would not discount the role that clay minerals play in ice nucleation based on just this paper,” he says. Still, the new results could be important findings if confirmed by future studies, he adds.