Herbicide is behind a U.S. firm’s purchase of a troubled pyridine plant in China 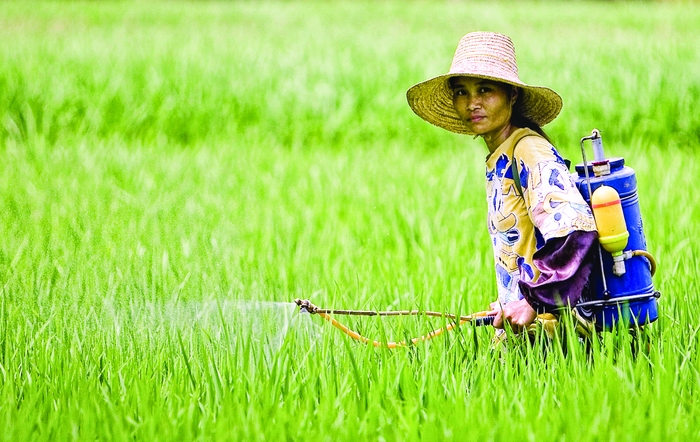 Credit: Diego Azubel/EPA/Newscom
As a result of population growth, prospects for crop protection chemicals are bright in Asia.

Chemical producers around the world often grouse about aggressive Chinese companies muscling their way into markets they don’t understand by overinvesting in production capacity. The new capacity typically depresses prices to unsustainable levels. But the enthusiasm of Chinese players can occasionally turn out for the best for the competition.

This spring, the U.S. chemical firm Vertellus Specialties agreed to buy a majority stake in a plant in China’s Shandong province capable of making 10,000 metric tons per year of pyridine and picoline. The facility, recently built by the Chinese firm Weifang Green Olive Chemical, never operated as it was expected.

Green Olive and Vertellus, the world’s largest pyridine producer, both want to capitalize on growing Chinese demand for paraquat, a broad-spectrum herbicide made from pyridine. But the plant required an experienced firm’s know-how before it could run properly, Vertellus says.

“Green Olive had invested in a picoline and pyridine plant that they could not run on a commercial scale after it was completed in 2011,” says Richard Preziotti, chief executive officer of Vertellus. The frustrated managers of the Chinese firm eventually approached Vertellus with a proposal to form a joint venture, he says. “When we toured the plant and did our due diligence, we were able to figure out what the problems were.”

The Chinese company, he notes, did not have much firsthand knowledge of either the pyridine or the picoline markets, nor did it make any of the raw materials required. And managing a plant that makes two products at once is particularly difficult, Preziotti says. “It’s coproduct chemistry, and how you manage that coproduct relationship—from a process standpoint as well as from a purification standpoint—is challenging.”

Manufacturing very different coproducts poses a marketing challenge as well, says Gautam Sirur, principal consultant at the Scottish crop protection consulting firm Cropnosis. Although the main use for pyridine is for making paraquat, picoline, which pyridine plants also generate, is used in the life sciences industry, particularly for making vitamin B-3. “It’s not all on the crop protection side of things,” Sirur observes.

China’s appetite for pyridine helps explain why a Chinese firm with no knowledge of the business would boldly build a new plant. The nation imports about 40% of the pyridine it consumes, primarily from Japan and India, according to CCM, a Guangzhou, China-based market research firm focused on the Chinese market.

Vertellus was formed in 2006 in a deal that merged Reilly Industries and Rutherford Chemicals. Vertellus makes derivatives of pyridine and picoline, vitamin B-3 in particular, although not paraquat. Vertellus also produces the mosquito repellent N,N-diethyl-m-toluamide (DEET), castor oil derivatives, and citrate polymer additives.

Vertellus was the first firm to make pyridine in China. In the late 1990s, Reilly built a plant in Nantong, Jiangsu province, to supply a nearby paraquat facility operated by Swiss crop protection firm Syngenta. Chinese firms have since eclipsed Vertellus in size, but the acquisition of the Green Olive plant puts Vertellus close to being the largest producer in China again, Preziotti says.

The poor outlook for paraquat, Sirur says, dampens global prospects for pyridine. Demand for paraquat is growing in the developing world, where it is widely used—particularly in rice fields—prior to planting, he says. But paraquat is a controversial pesticide that the European Union banned in 2007. In the U.S., although only licensed applicators can use it, the product has been making a bit of a comeback because of weeds’ growing resistance to the herbicide glyphosate, Preziotti and Sirur note.

Syngenta argues that the use of paraquat raises standards of living in developing countries by freeing farmers from the time-consuming task of removing weeds by hand. Moreover, it prevents soil erosion because it has no effect on weed roots that bind the soil together, the company claims. “The issue of paraquat’s toxicity has been mostly a problem in Asia where the herbicide is often used in large plantations that employ poorly trained labor,” Sirur asserts.

Despite restrictions in the West, prospects for paraquat in China are strong, Preziotti says. “About 70% of the world’s paraquat is produced in China, and correspondingly, about 70% of the world’s pyridine is consumed in China,” he says. Paraquat demand will continue to grow, he expects, because many parts of the developing world do not use crop protection chemicals at a time when improvements in agricultural productivity are badly needed.

“We may have 9 billion people on Earth by 2050,” Preziotti says. “We have to feed all those people, and there’s not a lot of arable land.” Pyridine is also used in biocides and other crop protection chemicals including an alternative manufacturing process for the insecticide chlorpyrifos.

Even if paraquat demand stays flat in China, the profit outlook for Vertellus and other firms making pyridine there just became much brighter. In late May, China’s Ministry of Commerce began imposing anti­dumping tariffs of up to 57% on pyridine imports from Japan and India. Vertellus couldn’t have timed its acquisition more favorably.

Business
DowDuPont clears Chinese regulators
Business
Crop Protection: Growth will ease after a strong year
Business
Chemical Trader Turns Into A Chemical Maker
Share X
To send an e-mail to multiple recipients, separate e-mail addresses with a comma, semicolon, or both.
Title: A Paraquat Play
Author: Jean-François Tremblay
Chemical & Engineering News will not share your email address with any other person or company.