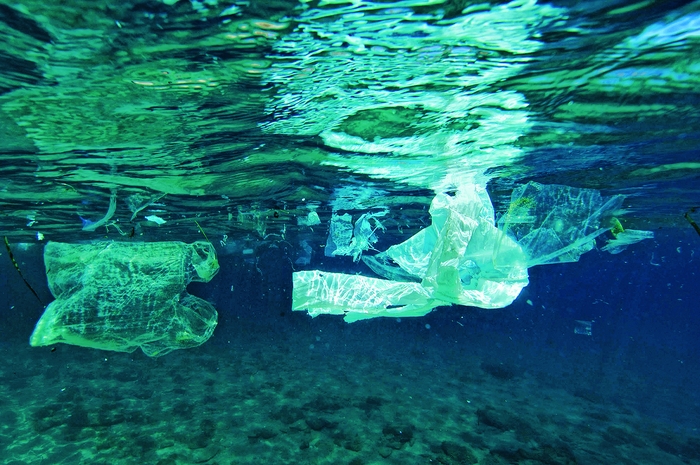 Credit: Gavin Parson/Marine Photobank
Plastic bags float in the sea off the coast of Greece.

Used plastic material that accumulates in the environment—particularly in rivers, lakes, and the oceans—seems like a problem that is at once too complicated and not important enough to fix. But that is not the take-home message from the second annual Plasticity Forum, which took place earlier this month in Hong Kong.

The conference brought together an eclectic mix of executives, entrepreneurs, government officials, investors, and designers who discussed practical solutions to the growing problem of plastic waste. The challenge appears to involve altering the behavior of tens of millions of people to solve an issue that is less urgent than global warming or access to food. But the talks, mostly upbeat, showed that the accumulation of plastic in the environment need not be something the world is condemned to live with.

“We look at plastic waste as an above-ground mine of materials and energy,” said Mike Biddle, founder of MBA Polymers. A polymer scientist, Biddle left Dow Chemical 20 years ago to develop plastic-recycling technologies. MBA operates recycling facilities in the U.S., Austria, China, and the U.K.

Plastics, Biddle pointed out, are worth more per pound than steel. But whereas steel tends to get recycled, most plastics aren’t because they come in many types and grades. Costing less to build than facilities for virgin plastics, MBA’s plants can sort bulk plastic waste and recycle it into resins that are nearly as pure as the original material, Biddle said.

Consumers’ desire to reduce plastic waste can be harnessed by companies to market their goods, Biddle noted. For instance, he said, the appliance maker Electrolux uses postconsumer plastics to make some of its vacuum cleaners and then heavily promotes the recycled content.

The consumer goods maker Method taps more directly into the public’s concern about ocean pollution with its Ocean Plastic hand and dish cleaner. Phil King, a Method manager holding the unusual title of “chief person against dirty,” said the soap is contained in a bottle made of postconsumer plastic and plastics recovered from beaches in Hawaii. Ocean Plastic is sold in about 300 Whole Foods Market groceries.

Operating on a far larger scale, consumer goods manufacturers in Taiwan are attempting to boost their environmental credentials, according to another speaker, Dasdy Lin of the island’s government-funded Plastic Industry Development Center, or PIDC. “Taiwan is export-oriented, and our plastic-processing industry is concerned that it’s not been able to achieve a green image on par with other countries’,” she said. To remedy that, PIDC provides an auditing service to certify the recycled plastic content of various products.

The forum is the brainchild of Douglas Woodring, a former Merrill Lynch executive who has lived in Asia for the past two decades.

An avid water sport enthusiast, Woodring grew concerned about plastic waste years ago when he began to notice plastics floating in the waters surrounding Hong Kong. In 2009, he decided to devote all his time to finding solutions to the problem without banning plastics.

“What people don’t realize is that unlike steel or paper, plastic waste in the ocean continues to cause damage for decades,” Woodring said. According to Ocean Recovery Alliance, an environmental group Woodring cofounded, only about 10% of postconsumer plastic is recovered and recycled. Some of the rest ends up in the oceans.

The idea behind Plasticity is to make the various actors in the plastics life cycle aware of the waste issue. “If you’re in packaging, you need to hear the opinion of people in recycling,” he said.

Ulrich Liman, manager of Bayer MaterialScience’s polymer R&D center in Shanghai, argued that the world needs more, not less, plastic. Better-packaged food can save lives in developing countries, he said. And according to industry calculations, each new ton of plastic produced reduces CO2 emissions by 7 tons by using it to make cars lighter and to better insulate homes.

The chemical industry, Liman added, wants to be part of the solution when it comes to plastic waste. “We are the originators of the materials, so the public will naturally blame us for this issue,” he said. If the plastic cannot be recycled, “at least you must make sure to recover the energy content.” Liman was representing positions of the American Chemistry Council, a chemical industry trade association that was one of several sponsors of the event.

Featuring several corporate speakers such as Liman, King, and Biddle, the conference shied away from horror stories about turtles strangled by plastics or the debate over using chlorine to produce vinyl and other polymers. Attendees left on the optimistic note that plastic waste can be viewed as an opportunity for smart businesses rather than a source of hand-wringing.

Climate Change
Are we ready for change?
Economy
Trade and plastics woes shadow chemical conference
Sustainability
Plastics industry launches waste initiative
Share X
To send an e-mail to multiple recipients, separate e-mail addresses with a comma, semicolon, or both.
Title: Tackling The Plastic Waste Problem
Author: Jean-François Tremblay
Chemical & Engineering News will not share your email address with any other person or company.