GREEN SCREEN
[+]Enlarge
Credit: Melody Bomgardner/C&EN
This mural at the biotech congress, painted by Dave Johnston and sponsored by Novozymes, shows items made from plants. 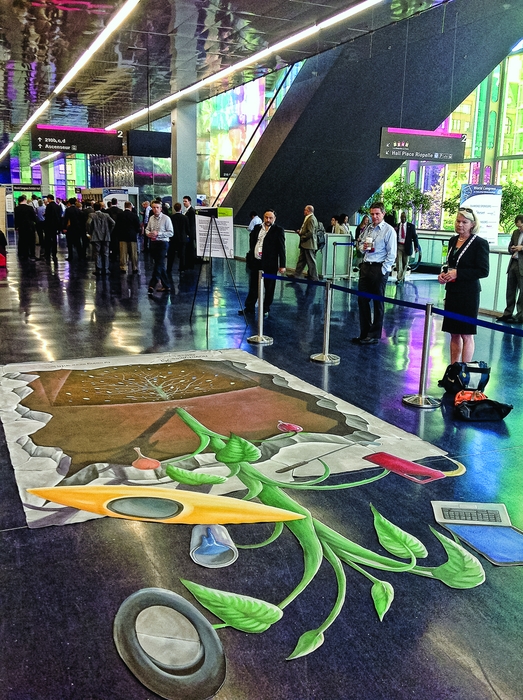 Credit: Melody Bomgardner/C&EN
This mural at the biotech congress, painted by Dave Johnston and sponsored by Novozymes, shows items made from plants.

The mid-June gathering of the World Congress on Industrial Biotechnology in Montreal marked the conference’s 10th anniversary. It attracted a record 1,200 attendees, to the delight of the organizer, the Biotechnology Industry Organization. Both the planned agenda and the spontaneous conversations at the event portrayed an industry that is poised to enter those awkward teenage years.

When the congress was young, biotechnology experts showed off engineered microbes or new technologies designed to turn abundant biological materials into useful fuels or chemicals. This year, executives focused on mature topics such as feedstock selection and scale-up engineering. The discussions highlighted the challenges inherent in launching a new industry.

Succinic acid is one early biobased chemical to reach commercial scale, and a session devoted to it attracted an overflowing crowd. The four-carbon organic acid can be used to make important intermediate chemicals such as adipic acid and 1,4-butanediol.

In late 2012, Reverdia, a joint venture of DSM and Roquette, started up a 10,000-metric-ton-per-year succinic acid plant in Cassano Spinola, Italy. And competitor Myriant announced at the meeting that it has begun production at its own facility in Lake Providence, La.

Both companies ferment sugar derived from corn but want the flexibility to draw on other sugar sources. “With more sustainable feedstocks at better economics, we will have greater market opportunity,” said Will van den Tweel, Reverdia’s general manager.

Alif Saleh, vice president of sales and marketing at Myriant, agreed, warning that it will take years for biomass-derived sugars to be cost-effective. “The chemical markets have not yet demanded it, but that may change rapidly,” Saleh said.

Reverdia and Myriant may agree on feedstock development, but they diverge on whether to pursue the market for butanediol, a high-volume spandex and urethane raw material that can be made from succinic acid. Reverdia is focused more on specialty succinic acid markets than butanediol, van den Tweel said. “We think it is very challenging with the present economics. We don’t really see value unless a green premium is paid.” Saleh said the opposite, calling butanediol “the most exciting opportunity” for Myriant.

End-market development dominated a session about the uses of polymers made from furandicarboxylic acid. Reacting biobased FDCA with biobased ethylene glycol yields polyethylene furanoate (PEF), a plant-derived plastic that can replace polyethylene terephthalate (PET). It works well in bottles, according to Tom van Aken, chief executive officer of Avantium. The company is testing PEF bottles with Coca-Cola and Danone Waters. FDCA is not a drop-in replacement for the terephthalic acid used to make PET, “but it is cost competitive and has significant performance benefits,” van Aken said. One benefit is that PEF is less permeable to CO2 than PET, adding to shelf life and helping beverage firms use less plastic by making bottles with thinner walls.

Mike Schultheis, a senior scientist at Coca-Cola, said his firm is excited about PEF. But he pointed out, “It’s no small feat to put a new polymer into existing systems.” One concern is how well PEF bottles will perform in the recycling stream. “It is important to us to do this responsibly,” he said.

Applications development is not as critical for firms that make drop-in replacements for petroleum-based products, but smooth sailing is not guaranteed either. Gevo, maker of a biobased version of the solvent isobutyl alcohol, has struggled with contamination problems. In the spring of 2012 the firm’s plant in Luverne, Minn., was producing large quantities of isobutyl alcohol via yeast fermentation when an undesirable microbe found a foothold. The company decided to stop operations and decontaminate the plant.

Gevo CEO Patrick R. Gruber spoke with C&EN shortly after the firm announced in Montreal that the plant had restarted. “We had to identify the sources of the contaminant, change the pipes, sanitize the equipment, train the staff, and modify the operating conditions to favor our yeast,” Gruber recounted.

Biobased chemical companies also are not immune to factors outside their plant gates. With the Great Recession in the past, the new era of cheap natural gas was on the minds of many participants. Alan Shaw, CEO of Calysta Energy, was in Montreal to talk about his vision of fuels and chemicals made from natural gas using biocatalysts. In a new partnership, Calysta will work with NatureWorks to research methane fermentation as an alternative route to lactic acid, which NatureWorks now derives from sugar to make polylactic acid.

Shaw contends that the Calysta process is green because it sequesters methane, a greenhouse gas. Others may quibble with that characterization, but the rise of natural gas as a feedstock—added to other growing pains for the industrial biotech industry—guarantees that there will be plenty to talk about at the next biotech congress.