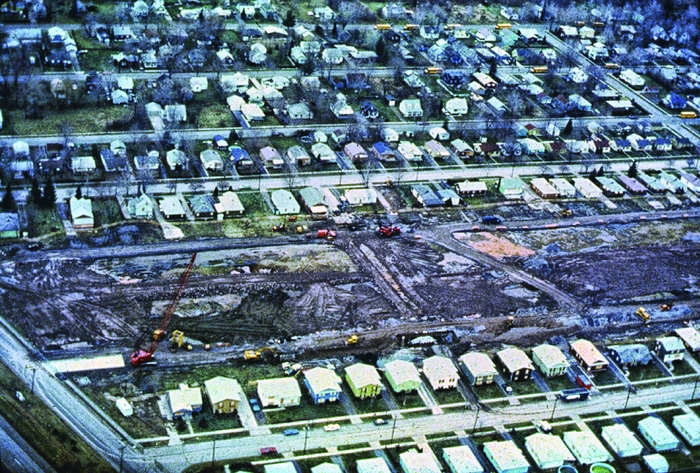 Credit: EPA
Legal scholars and trial lawyers say a Senate bill could hamper lawsuits claiming harm and seeking damages from companies that make or use chemicals. Pollution at Love Canal in Niagara Falls, N.Y., (shown) led to this sort of litigation.

After chemicals seeped from a waste dump in the Love Canal neighborhood of Niagara Falls, N.Y., residents filed lawsuits in 1979 to collect damages, claiming they were sickened by exposure to these substances. On the other side of the U.S., people from Hinkley, Calif., in the 1990s sued for compensation for health problems they said came from hexavalent chromium that leaked from a water-­cooling system of a natural gas compressor station into their drinking water.

Now, trial attorneys, law professors, and lawyers from public interest groups say legislation pending in the Senate would set up a major barrier to this kind of lawsuit. But lawyers who represent chemical companies counter that the pending legislation would make it easier to supply evidence for courts to consider. This debate involves a 13-line provision tucked into a 127-page bill, S. 1009, that would reform the federal law governing commercial chemicals, the Toxic Substances Control Act (TSCA).

The language is linked to another part of the bill that would, for the first time, require the Environmental Protection Agency to determine whether commercial chemicals are safe when used as the manufacturer intended. The provision says such safety determinations would be admissible as evidence, without challenge, in civil suits alleging harm from chemical exposure and seeking compensation for damages.

Sometimes called toxic tort cases, these lawsuits include the ones filed by Love Canal and Hinkley residents. An example of recent litigation involves plaintiffs in West Virginia and Ohio alleging they were sickened by exposure through their drinking water to perfluorooctanoic acid released from DuPont’s plant near Parkersburg, W.Va.

Legal scholars and trial lawyers are attacking the provision of S. 1009 that would mandate that federal and state courts accept EPA’s safety determinations as evidence. This change “would effectively bar judges and juries from taking into account other relevant evidence regarding the safety of a chemical, particularly new evidence developed after the determination is made,” says a group of 34 law professors, legal scholars, and public interest group lawyers. They raised these concerns in a June 12 letter to the top Democrats and Republicans on committees in the Senate and House of Representatives that have jurisdiction over TSCA.

Linda Lipsen, chief executive officer of the American Association for Justice, a group formerly known as the Association of Trial Lawyers of America, sent a similar letter on June 13 to Reps. John M. Shimkus (R-Ill.) and Paul D. Tonko (D-N.Y.). The lawmakers are, respectively, chairman and ranking minority member of the House Energy & Commerce Subcommittee on Environment & the Economy, which is holding a series of hearings on TSCA reform (C&EN, June 24, page 28).

In that letter, Lipsen says: “This could have the effect of granting chemical companies immunity from legal actions by private parties once EPA has issued a positive safety standard determination, even when subsequent evidence calls into question the agency’s reasoning.

“Just because a chemical is deemed ‘safe’ by a federal regulator should not mean that the manufacturer’s duty to protect the public ends,” Lipsen points out. For instance, a company may learn more about the toxic effects of its product after EPA makes a safety determination, she notes. Or a chemical maker could hide safety information from the public—and injuries could occur as a result. In either of these situations, “individuals should have the right to hold that manufacturer accountable,” she says.

“Manufacturers should compensate individuals and families who are injured as a result of a chemical producer’s failure to act responsibly,” she states.

Lawyers who represent industry disagree with the contention that S. 1009 could protect chemical companies from toxic tort litigation.

“It’s actually not all that big a deal, and I think it’s being misconstrued,” counters Mark N. Duvall, a principal at Beveridge & Diamond, a Washington, D.C., law firm that specializes in environmental litigation and regulation. The provision in S. 1009 would essentially streamline the legal process of admitting into evidence EPA’s safety determination for a chemical, he tells C&EN.

This language in S. 1009 may be an attempt to curb toxic tort litigation, says Lynn L. Bergeson, managing partner of Bergeson & Campbell, a law firm that works with chemical manufacturers and processors and is also based in Washington, D.C. But she questions whether this provision “could ever be credibly characterized as a total bar to private actions.” A determination from EPA that a chemical is safe for intended uses would not necessarily eliminate a manufacturer’s liability associated with that product, Bergeson says.

Duvall says a federal agency’s decision about a chemical’s safety, made after studying a substance for some time, is appropriate evidence for a tort case. It is then up to a judge or a jury to determine whether an EPA safety determination is relevant to any of the issues in the case, he says.

“It is not foreclosing juries or judges from deciding” whether claims have merit or whether damages should be awarded, Duvall explains. Tort suits are based on what lawyers call common law duty, which may involve concepts such as intent and negligence. In contrast, safety standards are intended for federal regulatory purposes, he points out.

In addition, Bergeson tells C&EN, if S. 1009 becomes law, the new safety standard for commercial chemicals “will invite a whole panoply of considerations” into toxic tort cases. Juries and judges would have to review new kinds of questions, including whether the manufacturer anticipated the conditions of a chemical’s use that led to the harms claimed, she says.

The provision of S. 1009 pertaining to toxic tort cases has seen little debate among policy watchers or in Congress to date, Bergeson points out. The authors of the TSCA reform legislation haven’t explained why they included the provision in the bill, but Bergeson says it would be helpful if they laid out the reasoning behind it.

Those authors are Sens. David Vitter (R-La.) and Frank R. Lautenberg (D-N.J.). Lautenberg died last month, and no ­Democrat has replaced him as the party’s lead supporter of S. 1009. Vitter’s staff did not respond to C&EN’s request for comments on the toxic tort provision in the bill.

The issue of how this language would affect toxic tort cases is likely to crop up in coming weeks as the Senate Environment & Public Works Committee and the House Energy & Commerce Subcommittee on Environment & the Economy hold hearings on TSCA reform.