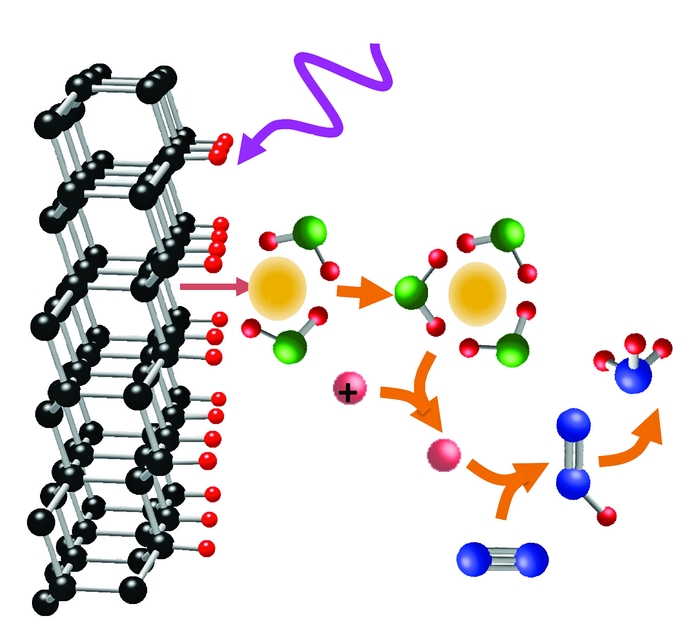 The sparkle and beauty of diamonds may have made them Marilyn Monroe’s best friend, but a curious electronic property is sure to endear them to chemists as well. Researchers show that a diamond property known as negative electron affinity (NEA) can be exploited under gentle conditions to drive the same industrially important reactions that are normally carried out at high temperatures and pressures (Nat. Mat. 2013, DOI: 10.1038/nmat3696). The finding could lead to energy savings and facilitate reactions that are otherwise difficult to carry out.

Hydrogen-capped diamond, a common form of the material, readily emits electrons when it’s irradiated with ultraviolet light. University of Wisconsin, Madison, chemists have now tapped into the easily stimulated photoemission, a consequence of diamond’s NEA, by using diamond as an electron source to drive chemical reactions.

The team demonstrates that shining UV light on diamond that is immersed in nitrogen-charged water causes electrons to be emitted and quickly interact with water molecules. These solvated electrons function as potent reducing agents that can react with protons and nitrogen to form ammonia.

Typically the nitrogen-to-ammonia reaction is practiced on an industrial scale at temperatures near 500 °C and pressures in the 150- to 250-atm range. The harsh conditions are required because N2 binds weakly to solid-state catalysts and the reaction proceeds via high-energy intermediates. In contrast, the diamond-mediated reaction occurs in water at room temperature.

The team, which includes Di Zhu, Linghong Zhang, Rose E. Ruther, and Robert J. Hamers, detected solvated electrons directly by using a technique known as transient absorption spectroscopy. And they used a method based on UV-visible absorption spectroscopy to measure yields of ammonia produced in specially designed photochemical cells. The team confirmed the origin of the ammonia by purging the cells with isotopically labeled N2. They also compared various forms of diamond and report that even inexpensive diamond grit, a common polishing compound, stimulates reduction of nitrogen to ammonia. Now the group is focusing on understanding the underlying reaction mechanism.

This study neatly demonstrates that diamond’s NEA can be applied to reducing nitrogen to ammonia in a liquid, says Northwestern University’s Robert P. H. Chang, a diamond specialist. He adds that this is a unique way to mediate reduction processes when solid-state catalysts pose difficulties.

Describing the study as “very impressive,” Princeton University chemist Andrew B. Bocarsly, an expert in CO2 electroreduction (see also page 21 of this issue), notes that “these findings may help provide new and important mechanistic insight into the redox chemistry of CO2.” Better understanding in that area may lead to ways to use CO2 as a feedstock for making fuels and chemicals, he notes.

Comments
Joshua Telser (July 1, 2013 12:42 PM)
What a relief to see this article. I heard Mitch Jacoby talk about it on June 26 at Northwestern University (in a career panel) and he had not yet found someone to comment on the work and his deadline was fast approaching. But everything worked out and on to the next deadline.
Reply »

Richard Samuelson (July 1, 2013 6:56 PM)
But can the diamonds easily get the electrons back so that the process can continue? What does an oxidized diamond do?
Reply »

querying chemist (July 3, 2013 6:31 PM)
I thought the electrons are from the hydrogen capping the diamond and the diamond itself is not being oxidized. And if I understand this correctly, it seems in that case that it is the hydrogen that would need to be replenished.
Reply »

Bob Hamers (July 8, 2013 1:59 PM)
The electrons are from the diamond. The H-termination is needed because it avoids having a surface dipole at the diamond-water interface and thereby facilitates the overall electron emission. Ideally the diamond should not be oxidized. However, because electrons in water can produce species such as OH radical, as teh reaction proceeds the sample does become oxidized over time, and as that occurs the reaction slows down. There are some schemes for possibly avoiding this. Even oxidized diamond continues to induce the reduction, just as a slower rate as the electron emission is not as efficient.
Reply »

Bob Hamers (July 8, 2013 1:52 PM)
The electrons can either be replenished by a diamond-induced oxidation reaction (the easiest path for pure nanodiamond in water, not connected to an electrode) or by connecting the diamond to a second electrode that can induce a sacrificial oxidation reaction. In the manuscript we show that both can happen. Introducing the second electrode speeds up the reaction and makes the efficiency higher but only works if the diamond is conductive (such as the "electrochemical grade" diamond. For diamond powder, once the electron is kicked out the only way to maintain the reaction continually is for the "hole" in the diamond valence band to induce an oxidation reaction. This concept is very similar to that of Fujishima and Honda in their famous paper on photocataytic oxidation at TiO2 surfaces, except that on diamond we reverse the sense of all the electrodes.
Reply »

Jim Parsons (July 8, 2013 1:21 PM)
I too have questions about the light excited diamond. I gather that not all of the reaction is worked out yet. I am going to try to get a peek at the referenced article. If the reaction does go in the way described, that would mean that the water now would have ammonium hydroxide in it, I think. There would be a shift in the pH. This too might cause problems with the reaction, as many reactions that are catalytically mediated are typically pretty fussy about their reaction conditions.
Reply »

Bob Hamers (July 8, 2013 1:55 PM)
You are correct that there is a shift in pH. We have done measurements of the efficiency of electron-induced ammonia reduction produced by solvated electrons and have that work under review for publication. It's not terribly sensitive to pH, but near-neutral pH works well.
Reply »

Jim Parsons (July 24, 2013 5:33 PM)
I think that your researchers might be on to something. I have a press that can generate about 645 short tons per square inch that I constructed several years ago. (I was a bit bored on the weekends, you might say.) So anyway, I used the press to whip up a few grams of bortz or industrial diamond using melted aluminum foil as the catalyst as the carbide is the intermediate. After washing the sample with white vinegar for a few moments I used a mixture of water, vinegar, and isopropyl alcohol (this allows the bortz to be wetted by the water more easily); I divided the sample into three parts and placed it in the direct sun for about a half an hour or so. Saving out one sample that did not have bortz in it. And lo and behold there was just a bit less of a vinegary smell with the two samples that did have bortz or industrial diamond in it. I made a point of looking up the referenced article and found that that the approximate range of UV radiation used in the article fell in the UVB range which can come through the atmosphere from our sun. Of course, there are many other explanations possible. Or I may have been sniffing and interoperating the reactions (if any) so that it comes out as ammonia that reacted with the acetic acid (white vinegar). But there may be a possibility that anyone with access to direct sunlight can make a little ammonium salt for them selves and fertilize their gardens? Many thanks for the article ---- I enjoyed fooling around with it.
Reply »

Mitch Jacoby/C&EN Chicago (August 8, 2013 11:12 AM)
It's great to see such a lively discussion on an interesting story in C&EN. Thank you for reading it and for taking the time to comment.
Reply »