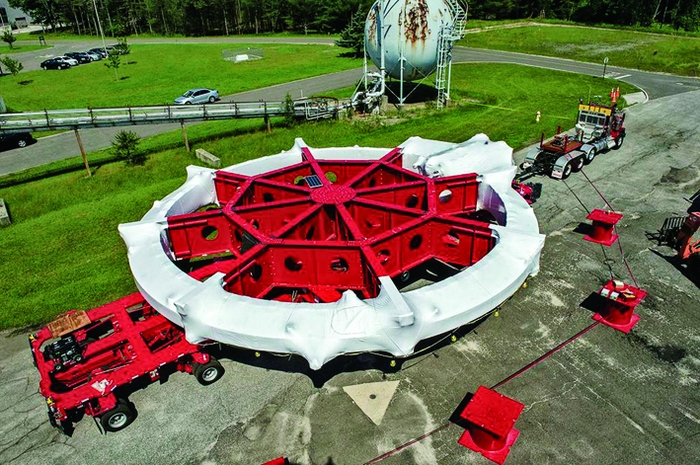 Why did the 50-foot-wide electromagnet cross half the country? To help physicists discover new subatomic particles, of course.

Mounted atop a 64-wheel trailer, a massive superconducting circular magnet left Brookhaven National Laboratory on June 23 and rolled down the highway on New York’s Long Island. Pulling out just past midnight and moving at a jogger’s pace, the magnet made its way to nearby Smith Point County Marina, where a crew hefted it onto a barge.

The “ring,” as it’s affectionately called by the scientists and engineers who look after it, is headed to Fermi National Accelerator Laboratory, west of Chicago. By the time it arrives there toward the end of summer, it will have traversed 3,200 miles around the tip of Florida and up a series of rivers.

At Fermilab, the magnet will become part of a machine designed to store elementary particles, called muons, which are similar to electrons but heavier. Inside the magnetic field of the ring, a muon’s spin “wobbles” by a predicted amount, says Hogan Nguyen, a scientist at Fermilab who has the Tolkienesque title “manager of the ring.”

Scientists at Brookhaven and Fermilab, as well as other institutions worldwide, want to measure this wobble, which is affected by the presence of subatomic particles such as bosons, to detect undiscovered particles and forms of energy in the universe.

“This experiment has the potential to open doors to new types of physics,” says Andre Salles, a Fermilab spokesman. And that’s why the electromagnet needs to move, he says. Fermilab already has the apparatus for generating an intense beam of muons, but it doesn’t have an electromagnet for storing them. “And it’s going to cost us 10 times less just to move the electromagnet than it would to build a new one,” Salles adds.

When C&EN went to press, the electromagnet was gliding south along the East Coast. To follow its journey, go to http://1.usa.gov/1bvRtYp. 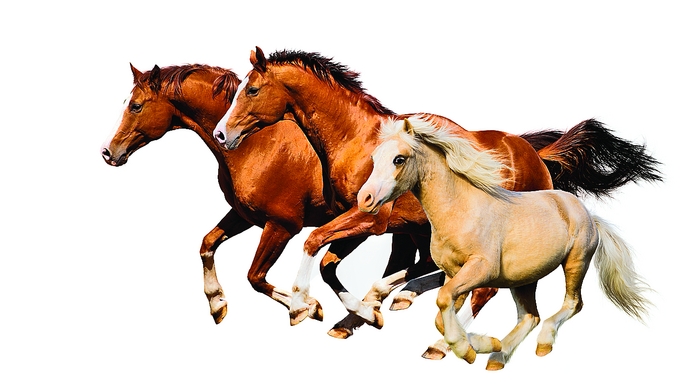 As physicists track the safe passage of the ring across the eastern U.S., scientists and policymakers are tracking the growing population of wild horses and donkeys in the West.

These free-ranging equids don’t have natural predators, so there’s nothing to prevent them from depleting the vegetation and water on the arid lands they roam—lands that also need to support livestock and other wild animals.

Charged with regulating the U.S.’s wild horses and donkeys, the Bureau of Land Management (BLM) currently deals with the situation by rounding up a portion of the animals and adopting them out to farms and ranches, says Lynn Huntsinger, a rangeland ecology expert at the University of California, Berkeley. Still, many animals don’t get adopted: According to BLM, 45,000 wild horses and donkeys were living in costly holding areas such as corrals during fiscal 2012.

“It’s not a sustainable way of dealing with the problem,” Huntsinger says.

One treatment option is porcine zona ­pellucida (PZP), a vaccine that successfully controlled wild horse populations in isolated spots such as Maryland’s Assateague Island. When injected into a female equid, the vaccine kick-starts production of an anti­body in the animal that prevents sperm-egg attachment.

No word yet on how this treatment might be administered to the U.S.’s widely dispersed wild equids, but the Newscripts gang guesses it might be as challenging as, say, sending a huge electromagnet on a 3,200-mile journey.

Biochemistry
Egg cell gatekeeper keeps zebrafish sperm in line
Environment
Don’t freak out, Europe, but you might be in the middle of a mustelid uprising
Education
Annals of fraudulent fecal matter
Share X
To send an e-mail to multiple recipients, separate e-mail addresses with a comma, semicolon, or both.
Title: An Electromagnet’s Epic Journey, Birth Control For Wildlings
Author: Lauren K. Wolf
Chemical & Engineering News will not share your email address with any other person or company.