The Hidden Value Of Carbon Dioxide

From greenhouse gas to useful chemicals and fuels via electrochemistry

IN AND OUT
[+]Enlarge
Credit: Etosha Cave/Stanford U
Stanford researchers designed this electrochemical flow cell with a large-surface-area working electrode (Cu, Au, other metals) and small volume of electrolyte solution to concentrate products of CO2 electroreduction and enhance detection. 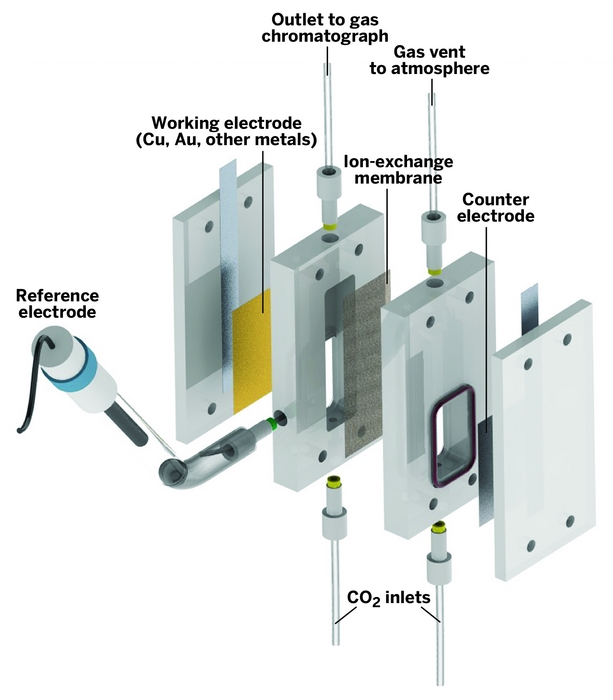 Carbon dioxide gets a lot of attention—most of it negative—as a greenhouse gas. But if CO2 could be converted in a cost-effective manner to valuable products, the ubiquitous small molecule so often reviled for its role in climate change might start to lose its bad rap.

“If we could take CO2 from the air and convert it electrochemically to fuels and commodity chemicals using renewable energy sources, such as wind power and solar energy, we could enable a shift toward a sustainable energy economy,” says Thomas F. Jaramillo, a chemical engineering professor at Stanford University.

A few scientists have been working toward this goal since the 1990s. They have demonstrated that it’s technologically feasible to convert CO2 to small organic molecules in an electrochemical cell. By applying electrical energy in a process called electroreduction, they have turned CO2 into carbon monoxide (CO), hydro­carbons, alcohols, and other types of compounds.

Now researchers face the challenge of implementing this type of chemistry on a large scale, designing a relatively inexpensive process that can compete successfully with current technologies. One of the major hurdles is coming up with a suitable catalyst. The catalyst must be energy efficient, highly active, and long lasting. And it must mediate production of a desired product selectively. “Presently, there are no known catalysts that meet these criteria,” Jaramillo says.

In June, at the North American Catalysis Society meeting in Louisville, a number of scientists discussed advances using copper, gold, iron, and other catalytic materials. Investigators also described novel tools for analyzing the distribution of products and for probing the elementary steps that underlie CO2 conversion.

If scientists figure these things out, it could lead to transportation and heating fuels that are carbon neutral: Their combustion wouldn’t cause a net increase in atmospheric CO2 levels. In addition, CO2 could replace petroleum as a source of many of these products, reducing reliance on an exhaustible and sometimes politically insecure resource.

To elucidate reaction mechanisms and pinpoint the factors that control catalytic activity and selectivity, researchers must first be able to identify and quantify all reaction products. With that aim in mind, Jaramillo’s group designed an electrochemical cell that includes a catalytic “working” electrode with a large surface area and a small volume of aqueous electrolyte solution. That combination of features concentrates the products and enhances detection. The team, which also includes Kendra P. Kuhl, Etosha R. Cave, and David N. Abram, formed products by applying a voltage to the cell as a stream of CO2 flowed through it. They used gas chromatography to detect gas-phase products and nuclear magnetic resonance spectroscopy to analyze products in the liquid phase.

Jaramillo says an exhaustive search of CO2 electroreduction literature involving copper electrodes shows that researchers have reported detecting a total of 11 products including methane, ethylene, CO, formate, and ethanol. In studies using copper electrodes, the Stanford team detected all 11 of those compounds plus five others not reported previously. The new finds include ethylene glycol, glycolaldehyde, hydroxyacetone, and glyoxal.

To understand how this process could generate such a complicated mixture—a key step to tuning the procedure to make a desired product—the team conducted a large series of tests including ones that probed the effects of applied potential on product selectivity. On the basis of those studies, they propose that an enol-like species (one with C=C and OH moieties) that forms on the copper-electrode surface during electroreduction plays an important role in forming many of the products, including oxygenated compounds with two and three carbon atoms (Energy Environ. Sci. 2012, DOI: 10.1039/c2ee21234j).

Now the group is applying similar techniques to evaluate the selectivity and energy efficiency of gold, platinum, silver, nickel, zinc, and other catalytic metals. Initial studies show that many of those metals convert CO2 to hydrocarbons, alcohols, and products of C–C coupling.

At the University of Delaware, Joel Rosenthal and John L. DiMeglio are studying bismuth-based catalysts for CO2 electroreduction. The pair reports that treating a glassy carbon electrode in acidic solutions of Bi3+ ions—forming micrometer-sized roselike crystallites—is an inexpensive way to make a catalyst that converts CO2 to CO. CO can be reacted with water to make hydrogen, and a mixture of CO and H2 (known as synthesis gas) is the starting material for commercial processes for making synthetic diesel and other fuels. The researchers note that their electrode material drives the CO2-to-CO reaction with higher energy efficiency than do costly gold and silver electrodes, the type traditionally used for this reaction (J. Am. Chem. Soc. 2013, DOI: 10.1021/ja4033549). 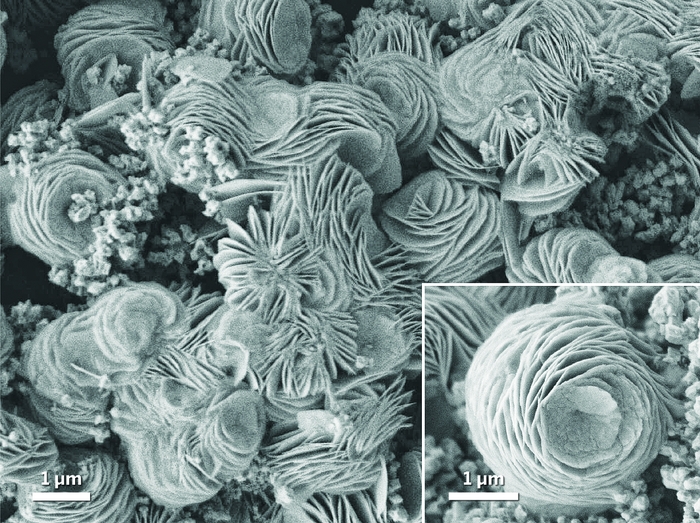 Low cost is one of the key criteria in Siglinda Perathoner’s search for CO2 conversion catalysts. For that reason, Perathoner, a catalysis specialist at the University of Messina, in Italy, and coworkers have developed methods for preparing catalytic electrodes that consist of iron nanoparticles supported on carbon nanotubes (Fe/CNTs).

In contrast to the liquid-phase reactions occurring in the electrocatalytic cells used by some researchers, the Messina team’s system converts CO2 in the gas phase. Specifically, the group designed a cell in which the Fe/CNT cathode reduces gas-phase CO2 with protons and electrons liberated from water by a photocatalyst on the other side of the cell. Working in the gas phase sidesteps the need to separate products from a liquid mixture and avoids potential limitations in the amounts of CO2 starting material that can be dissolved in aqueous solution.

Perathoner notes that her group’s catalytic cell can be optimized to produce mainly isopropyl alcohol, but it also converts CO2 to hydrocarbons having up to eight carbon atoms. She acknowledges that nanotubes decorated with Pt nanoparticles are more stable and in some cases more active catalysts than Fe/CNTs. Yet Fe/CNTs, especially ones doped with nitrogen, are highly active—for example, in producing isopropyl alcohol—and are especially attractive because of their low cost, she says (J. Energy Chem. 2013, DOI: 10.1016/S2095-4956(13)60026-1).

And Princeton University spin-off Liquid Light of Monmouth Junction, N.J., is commercializing technology for producing a range of C1–C4 compounds, such as formic acid and oxalic acid, and synthesis gas. Company representatives are careful not to tip their hands but offer that their processes are catalyzed by inexpensive aromatic organic compounds such as substituted pyridines.

According to Andrew B. Bocarsly, the Prince­ton chemist whose findings underpin the technology being commercialized by Liquid Light, which he cofounded, “Major oil companies have expressed considerable interest in this technology.”

Nowadays, interest in CO2 electroreduction in general is growing by leaps and bounds. But it wasn’t always that way. Bocarsly says that when his group published its first paper in this area in 1994, “it generated approximately zero interest.” Global warming and greenhouse gas weren’t yet household terms. For more than 10 years, the field saw little progress. Then when Bocarsly and his former graduate student Emily Cole figured out how to use sunlight to drive reduction of CO2 to methanol in a photoelectrochemical cell, the topic came to life again, he says (J. Am. Chem. Soc. 2008, DOI: 10.1021/ja0776327).

“It’s very exciting to see this recent flurry of activity” in CO2 conversion chemistry, Bocarsly says. “I have done a lot of things that are interesting to me academically and scientifically. But this always struck me as something that has potential to make a real difference.”