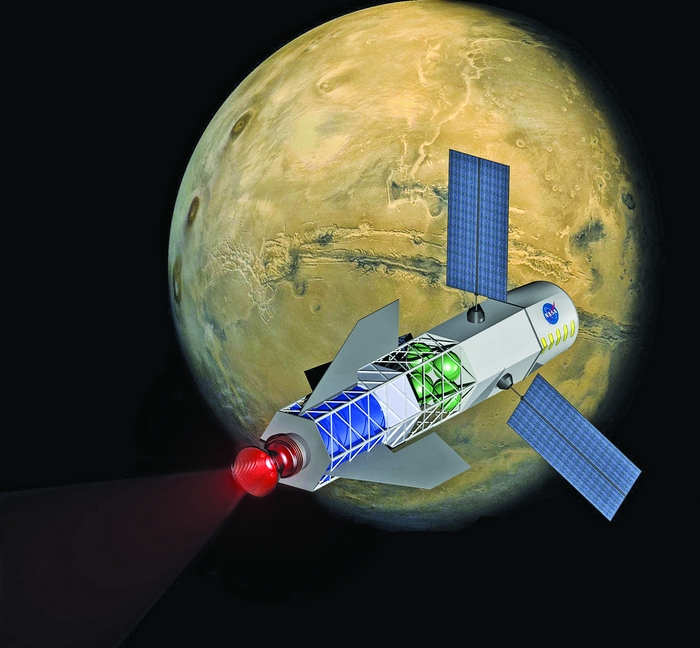 Credit: MSNW/U of Washington
Rendering of fusion-driven spacecraft near Mars.

As the Mars Curiosity spacecraft journeyed from Earth to Mars in 2011 and 2012, it picked something up along the way: dangerous levels of radiation. The findings made the prospect of a human journey to the Red Planet seem incredibly risky. But the discovery also could boost ongoing efforts to develop protective materials and faster engines to protect astronauts from radiation on possible future Mars missions.

The results, disclosed in May, indicate that an astronaut inside a spacecraft would exceed the current U.S. lifetime radiation exposure limit during one round-trip mission (Science 2013, DOI: 10.1126/science.1235989). Research scientist Cary Zeitlin of Southwest Research Institute in Boulder, Colo., the study’s principal investigator, likened the exposure to getting a CT scan every five or six days. Such exposure could increase the risk of cancer beyond what the National Aeronautics & Space Administration currently considers an acceptable risk for astronauts—no more than 3% greater risk than that experienced by the general Earth-bound public.

The measurements are from a sensor aboard the Mars Science Laboratory, part of the Curiosity rover. They show that radiation exposure is a problem NASA “is going to have to deal with one way or another before it can send people into space for longer periods of time,” Zeitlin says.

He notes that there are two sources of harmful space radiation. The most common is continuous low-dose galactic cosmic rays, which are high-energy particles from deep-space supernovas and other sources. Heavy particles such as iron in the cosmic rays penetrate vehicle shielding easily and are a source of great uncertainty in efforts to assess space travel health risks, he says. The other source is solar emission particles. They can be shielded against, but scientists say it is hard to predict when solar eruptions that produce the particles will occur.

NASA is working on a rough outline of a plan to put six astronauts on Mars for about a year, taking advantage of a close pass of Earth and Mars around 2030. All previous human missions in space have been protected from the most harmful space radiation by Earth’s magnetic field. That won’t help during the 180-day trip to Mars or during any time spent exploring its surface.

Astronauts traveling to Mars will need shielding on their spacecraft as well as protective shelter on the ground. Most types of shielding under consideration use hydrogen atoms to block space particles from both sources of radiation. When hydrogen is irradiated, it doesn’t degrade into smaller particles that could penetrate the body and harm human DNA, according to Sheila Thibeault, a scientist at NASA Langley Research Center in Hampton, Va.

Water, with its two hydrogen atoms, is a good radiation shield but is too heavy for practical use in spacecraft. Polyethylene plastic, made of carbon and hydrogen, is used to shield the interior of the Space Station, but too much of it would be required for use on a Mars mission.

NASA is also considering nanofoams. But Robert Singleterry, director of radiation science at NASA Langley, believes the radiation problem is tough to overcome. “There is no magic material” for radiation shielding, Singleterry says.

Thibeault believes she may have one answer to the radiation conundrum: lightweight boron nitride nanotubes (BNNT) with attached hydrogen molecules. BNNTs, which have been synthesized in the lab, have high strength and temperature stability. Instead of being attached to the inside or outside of spacecraft, they could be formed into the ship itself, providing both structure and shielding at the same time and thus reducing the weight problem.

Thibeault is currently trying to figure out how to attach hydrogen molecules to the nanotubes. “The next step would be to build a small satellite, shield it, and see what happens to it” when exposed to radiation on the moon or Mars, she says.

NASA has organized a crowdsourcing project in collaboration with the U.S. Agency for International Development and apparel manufacturer Nike to attract far-out ideas for radiation shielding such as self-healing fabrics, new kinds of spacesuits, or even ways of altering the biochemistry of astronauts themselves.

“Right now we adapt the atmosphere or environment to humans,” says NASA’s Beth Beck, outreach manager for the crowdsourcing effort. “We build houses or habitats. But what if we think along the lines of adapting humans to the environment? What if the human body could be conditioned or programmed so that when it detects radiation, the skin would harden instead of the spacesuit?” Some researchers are already studying whether an injection of antioxidants could provide additional radiation protection or if some form of gene therapy could beef up the body’s own defenses. Beck says NASA has had preliminary discussions about ways to alter the human body to protect it against radiation but has not yet funded any experiments in this area.

TEST CHAMBER
[+]Enlarge
Credit: MSNW/U of Washington
Experiments on fusion-driven rocketry are carried out in this facility at the University of Washington’s Plasma Dynamics Lab. 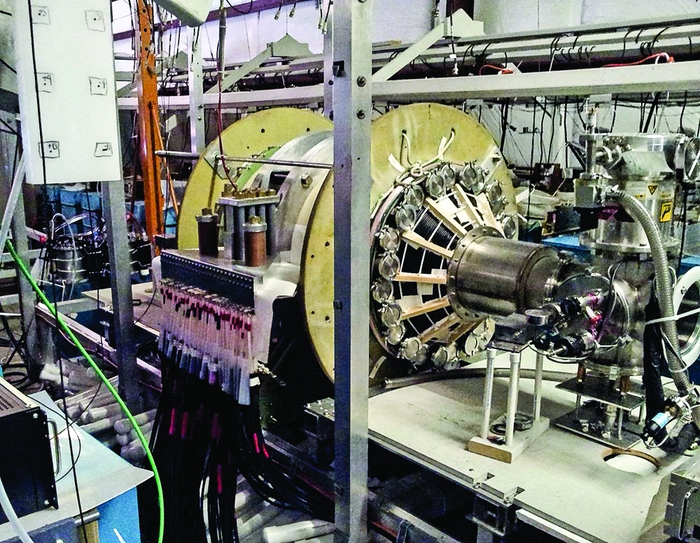 Credit: MSNW/U of Washington
Experiments on fusion-driven rocketry are carried out in this facility at the University of Washington’s Plasma Dynamics Lab.

While some researchers are looking for improved shielding, others are trying to find ways to get spacecraft to Mars faster. A shorter time in space would mean less radiation exposure for the astronauts.

For instance, University of Washington professor of aeronautics and astronautics John T. Slough and coworkers have been working on a fusion reaction that would cause a lithium plasma to be ejected from a rocket nozzle at high velocity. Magnetic fields would both guide the flow of plasma and protect the spacecraft and crew.

Slough believes such a system might make it possible to fly to Mars in only 30 to 90 days, instead of the six months required by conventional rockets. Because lithium is combustible, his group has been using aluminum as a proxy material for early experiments under grants from NASA’s Innovative Advanced Concepts program, which is also funding Thibeault’s work on nanotubes.

In addition to his academic position, Slough is president and director of research at MSNW, in Redmond, Wash., a start-up that focuses on space propulsion technologies, and he and his colleagues there have already built a small thruster. Slough says that by the end of the summer the research team hopes to produce the entire fusion reaction.

Scientists believe that Congress will need to provide more funding to make a Mars mission a reality and that the feasibility of such a mission depends on solving radiation-shielding challenges and/or developing faster propulsion systems.