A Renewed Fight Against Climate Change 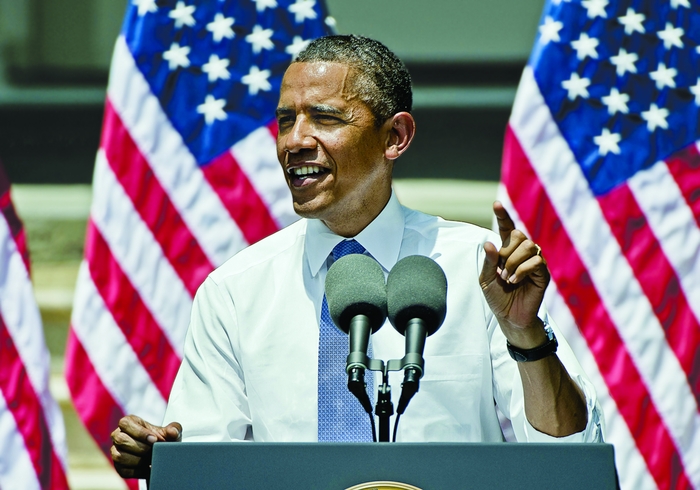 On a steamy day this week in Washington, D.C., President Barack Obama, in a forceful speech at Georgetown University, rolled out his plan to limit U.S. greenhouse gas emissions. He promised an executive order to cut those emissions with the goal of hitting a target of 17% below 2005 levels by 2020.

Since taking office in 2009, the President has warned of climate-change impacts, but his efforts to address the problem have been mostly on the margins—efficiency requirements and technical and financial support for advanced energy technologies. In his Georgetown speech, he presented a framework of specific actions aimed at reining in the energy industry, the source of 40% of U.S. carbon dioxide emissions.

Fossil-fuel industry advocates immediately criticized the President’s plan. They predicted pitched battles during the 2014 congressional elections because of the President’s continued “war on coal,” in the words of Senate Minority Leader Mitch McConnell (R-Ky.) and other Republican lawmakers.

Environmental groups were elated with the President’s climate agenda and his promise of action. As was American Chemical Society President Marinda Li Wu, who applauded Obama’s “tangible efforts to address global climate change.”

HIGHLIGHTS OF THE WHITE HOUSE PLAN

◾ Loan guarantees worth $8 billion will be offered for advanced fossil-fuel energy projects that avoid, reduce, or sequester greenhouse gas emissions.

◾ New wind and solar energy projects sufficient to meet electricity needs of 6 million homes will be approved on federal lands by 2020.

◾ New efficiency standards will be required for federal buildings.

◾ New federal programs will be introduced to better prepare states and communities for climate-change impacts.

◾ Greater efforts will be made to reduce hydrofluorocarbon and methane emissions.

The President, in his address, described decades of climate-change science and a stream of scientific papers showing beyond-normal droughts, fires, and floods. For 97% of climate scientists, he said, the data have put doubts that climate change is real to rest.

“As a President, as a father, and as an American,” Obama told his young audience, “I’m here to say we need to act. I refuse to condemn your generation and future generations to a planet that’s beyond fixing.

“I’m here to enlist your generation’s help in keeping the U.S. a leader—a global leader—in the fight against climate change,” he continued.

Nonetheless, any executive order on reducing greenhouse gas emissions that the President issues will be carried out by the Environmental Protection Agency, whose regulatory proposal and review process will provide ample opportunity for opponents of such measures to seek delays.

Obama’s actions will elevate the importance of the climate-change issue for all government activities. For example, the President singled out the State Department’s upcoming decision concerning the Keystone oil pipeline from Canada to the U.S. To gain U.S. approval to build the pipeline across U.S. borders, he said, the project cannot increase carbon pollution. The pipeline’s net effect on climate, he stressed, “will be absolutely critical to determining whether this project is allowed to go forward.”

However, the President assigned a special role for natural gas, citing methane’s lower CO2 emissions when used as a power plant fuel, despite being a potent greenhouse gas itself. Obama urged that the U.S. continue its reliance on natural gas by pursuing more drilling and use and by strengthening the country’s role as the world’s top natural gas producer—in the “medium term at least,” he said.

Comments
Swapnil B. Ambade (June 30, 2013 9:14 PM)
This is a wonderful step to combat further damage. It is although a little sad that the President will have to use his executive office powers rather than seek congressional legislation to reduce GHGs. Does that mean that other guys are too adamant on not letting any fresh air remain for the future generations? In broader sense, its not only the congress, but we need good public will, support and participation to reduce emissions. Its high time we suppress our egos rather than being asphyxiated.

Simply, its now or never!

Ken Baer (July 1, 2013 12:52 PM)
Actions that the EPA has already taken to destroy American businesses, including power utilities, destroying jobs and casuing the cost of electricity, energy and supporting business costs to increase, is wrong. Government officials should be indicted for their part in bypassing Congress, in taxing business and individuals. There IS NO MAN-MADE GLOBAL WARMING. There is a big noise about global warming, but science does not support global warming. Businesses and individuals cannot be taxed for stupic global warming schemes. The Environmental Protection Agency should be eliminated very soon. The States have the ability to protect air, water, and soil, and this is where the authority should reside, not the federal government. We simply do not need a federal EPA to protect our environment.
Reply »

Stan Hutchings (July 6, 2013 9:07 PM)
We don't need science to perceive global climate disruption, we just need to watch Mother Nature. Species are already adapting, evolving or dying due to climate changes.
Power utilities and other businesses have been poisoning our environment for years with mercury, PAHs, acid rain and other contaminants, in addition to carbon dioxide. EPA should have made them clean up or be shut up years ago. The victims of pollution should arise and demand restitution (as has begun in some developing nations). Profit and jobs is no excuse for the slow MURDER by poisoning of our fellow Americans, as well as our global neighbors.
The federal government is given the constitutional responsibility to regulate interstate commerce. Exporting waste to adjacent states MUST be stopped, and the federal government has the mandate to do it.
Reply »

Jeff Johnson has an article on Climate Change in the July 1 Issue of Chemical and Engineering News. The article concerns Pres. Obama's recent speech at Georgetown University, in which he promised to use an executive order to cut greenhouse gas emissions by 17% below the 2005 level in the next seven years. In that speech, he identified carbon dioxide as a greenhouse gas.

In Mr. Johnson's article, he quotes you as applauding Pres. Obama's decision to take "tangible efforts to address global climate change". Without your specifically saying so, it appears that you may be in agreement with Pres. Obama's plan to reduce carbon dioxide emissions by reducing the burning of carbon containing fuels.

The major accent seems to be on controlling climate change. History shows that the Earth's climate has changed considerably through the millennia, will likely do so in the future, and those future climate changes will likely have a significant economic impact on human civilization. For comparison, we have significant negative impact from weather changes and have had essentially no success in controlling weather. From that experience, I judge that we will be equally thwarted in trying to control climate.

However, I am more concerned with the apparent assumption that carbon dioxide in the atmosphere has any significant bearing on climate. Therefore as head of a major scientific organization, perhaps you would be so kind as to advise me concerning any references to proposed mechanisms by which a 1% concentration of carbon dioxide in the atmosphere could affect climate.

Thank you for your consideration.

Thank you for sharing your thoughts with me about the C&EN coverage of President Obama’s climate agenda. I appreciate hearing from members and knowing that we are reaching you and your peers through the magazine.

My specific comments in the story were based on, and intended to advance, the ACS public policy statement on climate change (http://www.acs.org/content/dam/acsorg/policy/publicpolicies/promote/globalclimatechange/2010-15-climate-statement-pdf.pdf). The Board of Directors adopted this position in late 2010 as the most recent version of a series of statements on climate that date back to 1999. The ACS climate public policy statements have been drafted for the Board by the members of the ACS Committee on Environmental Improvement based on their own professional experiences and expertise and their extensive consultation with other ACS committees and members. I have shared your thoughts with them as part of their research for future policy drafts.

Thank you again for your interest in the ACS position on climate change,