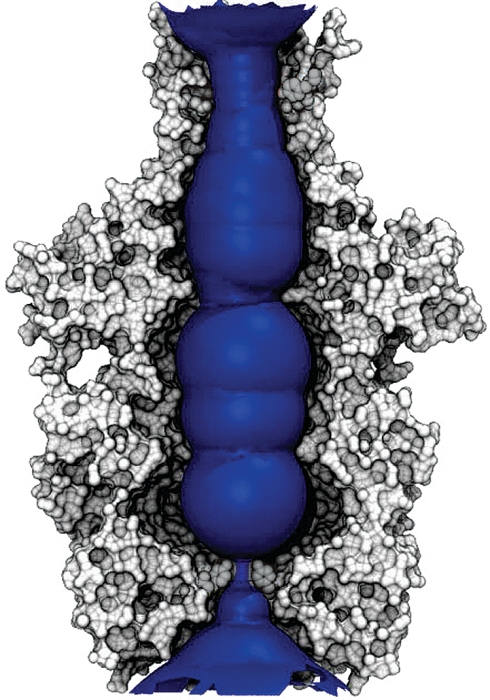 A strategy to disrupt a fuzzy sugar coating that helps protect pathogenic bacteria from being recognized and attacked by the mammalian immune system could be the key to developing a new class of antibiotic medications, scientists report.

[+]Enlarge
Octakis(6-deoxy-6-amino)cyclomaltooctaose blocks transport of polysaccharides through the Wza pore. 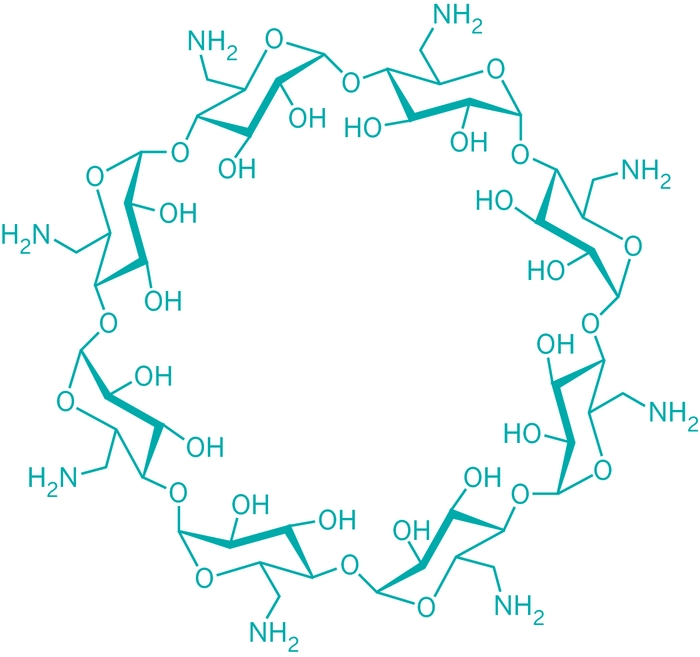 Octakis(6-deoxy-6-amino)cyclomaltooctaose blocks transport of polysaccharides through the Wza pore.

So far the approach has been tested only in bacterial cultures. But if it can be shown to work in animal tests and human clinical trials, it could become an effective method for killing bacteria such as Escherichia coli that can cause diarrhea, cholera, food poisoning, and pneumonia. And it could further help address the problem of bacterial resistance to antibiotics by providing a new target for drugs in multidrug cocktails.

The strategy by Oxford University’s Lingbing Kong, Benjamin G. Davis, Hagan Bayley, and coworkers focuses on the outer protective layer of some gram-negative bacteria, called the capsular polysaccharide layer. Under a microscope, this layer makes the bacterial cells look like little fuzz balls.

Researchers have not been able to develop drugs capable of disrupting this layer specifically and effectively. The Oxford team found an agent that does so by blocking the transport of capsular polysaccharides to the cell surface (Nat. Chem. 2013, DOI: 10.1038/nchem.1695).

The gram-negative bacteria they targeted produce the long capsular polysaccharides for their fuzzy protective coatings by linking sugar repeat units together inside the cell and then transporting the polymers to the cell surface through a pore formed by the protein Wza. Kong, Davis, Bayley, and coworkers speculated that compounds that resemble the exported polysaccharides might be able to sneak into the Wza channel from the outside and block it. The top part of the pore pokes outside the cell’s outer membrane, so it is accessible to such agents.

They screened a series of γ-cyclodextrins with doughnut shapes similar to those of capsular polysaccharides and found one, octakis(6-deoxy-6-amino)cyclomaltooctaose, that blocks the Wza channel. This inhibition thins the capsular polysaccharide layer, allowing the bacteria to be recognized and killed by complement, a protein-based component of the human immune system.

A limitation of the fuzz-reducing tactic is that some bacteria use proteins other than Wza to export capsular polysaccharides, explains Ilan Rosenshine of Hebrew University of Jerusalem, an expert on bacteria/host-cell interactions. But Wza is found in many types of bacteria, so the Oxford strategy could prove effective “against large numbers of E. coli and other gram-negative pathogens,” he says. Besides immune system protection, bacterial polysaccharide secretion is essential for forming bacterial biofilms, so cyclodextrin agents might also inhibit formation of harmful biofilms on medical devices, Rosenshine speculates.

Mark A. Saper, a structural biologist at the University of Michigan Medical School who studies proteins associated with capsular polysaccharides, says he wouldn’t call the discovery a major breakthrough. “But it is the first attempt to inhibit capsule production at the Wza exit portal,” he notes. “I have always thought that inhibiting capsule production would be a very good approach.” The study’s demonstration of fuzz inhibition in living cells, albeit at high concentrations, “is very promising,” Saper says.

The Oxford team next plans to evaluate the efficacy and safety of their polysaccharide mimics in animals and, if those tests are successful, to move the potential drugs into human trials.