Over the past decade, C&EN’s Global Top 50 ranking of the world’s largest chemical companies has chronicled the rise of Asia and the Middle East as chemical production juggernauts. As these emerging economies prospered, regional industry champions such as Sinopec and Saudi Basic Industries Corp. (SABIC) have shot up the ranking. 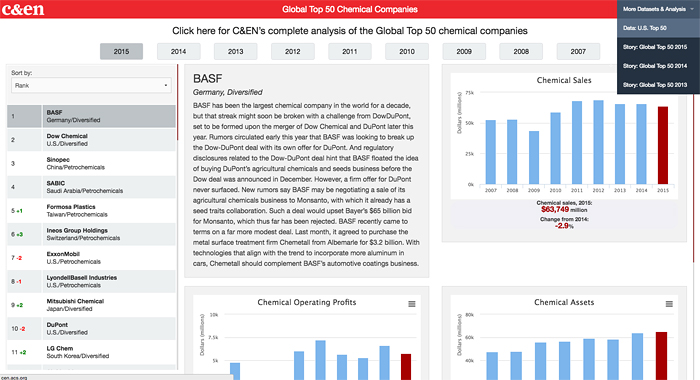 Click here for an interactive look at the Global Top 50 that lets you sort by company and year, with complete data going back to 2007. Be sure to also check out our US Top 50 information presented in the same interactive format.

Those companies are now taking a breather, according to C&EN’s latest survey. After a strong 2011, the chemical industry stalled across the globe in 2012. China’s normal appetite for chemicals was sated, and no region saw swift enough economic growth for local firms to distinguish themselves. Merger and acquisition activity was muted, although experts say deal-making ought to pick up soon.

The failure of the industry’s main drivers—Asia and, more recently, North America—to rally in 2012 was a drag on performance. U.S. chemical shipments declined by 1.5% last year. Results in Asia were mixed. Japanese chemical production was down, and Taiwan and South Korea posted output gains. China provides fewer data, but production of both ethylene and benzene, the most basic of chemicals, was down. Over the preceding decade, Chinese output of both those chemicals had tripled.

Europe, at which many harsh economic words have been directed of late, actually posted positive results. Shipments in the European Union increased by 2.7% last year.

The German chemical giant BASF once again tops C&EN’s Top 50 ranking with $79.8 billion in sales, a slim 0.9% improvement over 2011. In his remarks at the firm’s annual shareholders meeting in April, BASF Chairman Kurt Bock expressed little enthusiasm about this year.

ON THE LIST
[+]Enlarge
Credit: Arkema
Arkema, one of the top 50 firms, operates this plant in Calvert City, Ky. 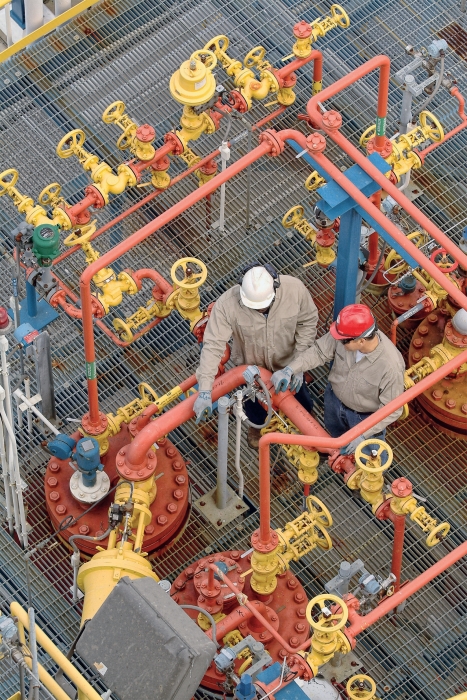 Credit: Arkema
Arkema, one of the top 50 firms, operates this plant in Calvert City, Ky.

“We expect global economic growth to pick up only slightly in 2013,” he said. “The chemical industry will increase production again compared to 2012 because the emerging markets are growing.” He added that the economic situation will be tenuous, given the lingering European debt crisis and the overall delicate state of the global economy. 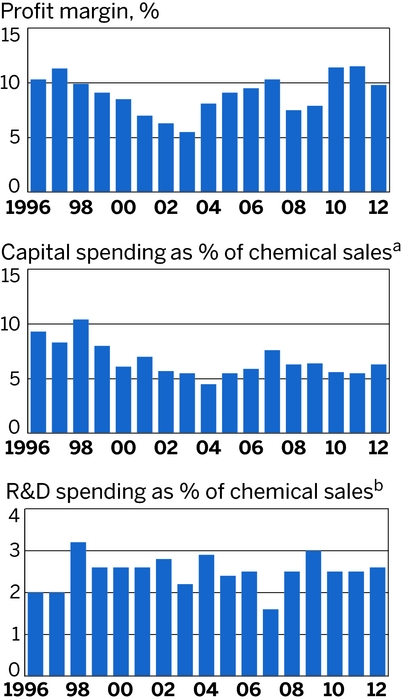 As for the large firms from the developing world that are now among the world’s most important chemical producers, the results were uncharacteristic. Chinese giant Sinopec saw chemical revenues decline by 3.4% to $56.4 billion. Its ranking stood pat at number three, but it actually came closer to becoming the second-largest chemical producer in the world, nearly overtaking Dow Chemical, which posted a 5.3% decrease in revenues. A mere $344 million in sales now separates the two firms.

SABIC saw only a 1.1% increase in revenues to $42.2 billion. It remains the fifth-largest chemical maker.

These firms gave much more dynamic performances during the previous decade. In 2002, SABIC was the 13th-largest chemical company in the world with only $8.0 billion in sales, and Sinopec was number 14 with sales of $7.9 billion. Both firms have seen rapid organic growth since then. Additionally, SABIC purchased GE Plastics as well as two large European petrochemical businesses.

Judging from their future-oriented spending, a number of companies believe that better days lie ahead, although they seem to be more interested in building plants than laboratories. As a percentage of sales, capital spending increased from 5.5% in 2011 to 6.3% last year. The 41 companies that reported capital spending figures laid out a total of $49.9 billion in 2012, a substantial 17.0% increase versus the year before.

R&D spending increased from 2.5% to 2.6% as a percentage of sales. The 26 chemical firms reporting such data combined for $12.7 billion in R&D spending, a 1.1% increase from the year before.

There was a remarkable lack of churn in this year’s Global Top 50: 49 of the companies also made the list last year. C&EN added only one firm, Shell, and that’s because it didn’t provide chemical sales figures in 2011. The Swiss specialty chemical maker Clariant was the sole company that dropped off the list. It posted an 18% decline in sales in 2012 largely because of the pending divestment of textile chemicals and other businesses to private equity firm SK Capital Partners.

Acquisitions normally drive changes in the ranking, but their impact was limited this year. Belgian specialty chemical maker Solvay saw sales increase by nearly 60% because of its purchase of France’s Rhodia in 2011. It rocketed up to number 22, from 31 the year before. Eastman Chemical purchased specialty chemical maker Solutia last year, helping it climb from 50 in last year’s ranking to 43.

Alasdair Nisbet, chief executive of the strategic advisory firm Natrium Capital, predicts that the lull in merger and acquisition activity is temporary. “Overall, the market is showing signs of recovery in terms of deals in the pipeline,” he says. “There will be a reasonable flow of deals coming out over the next 12 to 18 months.”

Strong balance sheets mean that most chemical firms are in a position to borrow money. In turn, the bond market is rife with investors willing to provide financing. “Over the last six to 12 months, the level of perceived risk has decreased, and therefore people’s preparedness to lend more money to individual situations has risen,” Nisbet explains.

The growing availability of cheap natural gas from shale might motivate deal-making in North America. Given the massive amounts of capital necessary to build chemical plants that take advantage of this raw material—more than $5 billion in some individual cases—Nisbet says it might make sense for companies to team up to achieve economies of scale, dilute risk, and get their hands on new technology. “Shale is creating an environment of change, which some people will react to through acquisitions or disposals,” he observes.

The year is already half over, so it is probably too late for a deal that will change the next Global Top 50 ranking. Perhaps that will have to wait for the 2015 edition. But should the economy become more buoyant, particularly in the developing world, C&EN’s 2014 survey might reveal some surprises.