[+]Enlarge
Credit: U of Queensland
Watched pitch never drops: Mainstone is itching to see it happen. 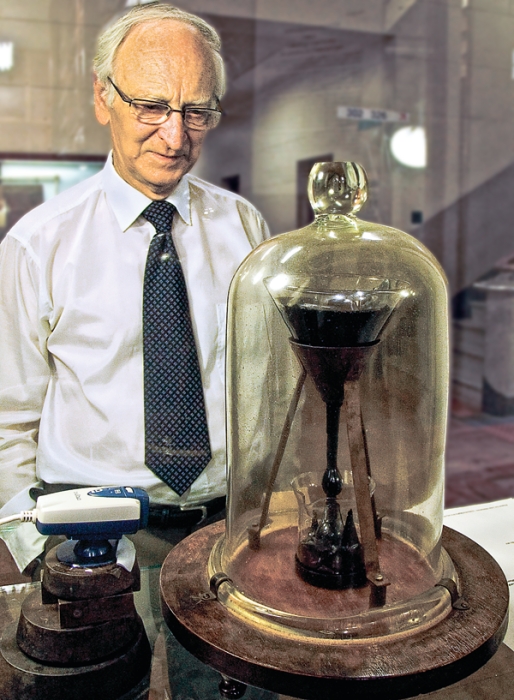 Credit: U of Queensland
Watched pitch never drops: Mainstone is itching to see it happen.

In 1927, Thomas Parnell, a physics professor at the University of Queensland, in Australia, set up an experiment that’s still running today.

He heated a derivative of tar, called pitch, and placed it in a sealed glass funnel. Three years later, after it settled, Parnell cut the bottom of the funnel. Only eight drops of pitch have fallen since then, and so far none of them have been witnessed.

According to the experiment’s present-day curator, physicist John S. Mainstone, pitch is viscoelastic—it has viscous and elastic properties, which means it is both a liquid and a solid. It has constant volume and shape, like a solid, and when struck with a hammer, it shatters. But, like a liquid, it flows, albeit at a snail’s pace.

Mainstone has estimated Queensland’s pitch to have a viscosity of about 3×108 pascal-seconds. That’s about 60 million times the viscosity of molasses, making pitch “slower” than the infamous sweet goo.

Mainstone has missed all five drops during his 52-year tenure as curator, most recently in 2000 when a webcam ­malfunctioned.

Enthusiasts at Queensland have been anticipating the ninth drop for months. Although it’s expected to fall any day now, it hadn’t yet when C&EN went to press.

One factor that’s made it difficult to estimate the time between drops is air-conditioning, Mainstone says. Before the experiment was installed in its current building in the early 1990s, seven to nine years would pass between drops. But lower temperatures lead to higher viscosity, so the interval is now more than a decade.

As if awaiting the drop weren’t enough drama, on July 11, a replica experiment started in 1944 at Trinity College Dublin beat Queensland to it and caught a drop of pitch falling on camera for the first time.

But the Queensland setup is under 24-hour surveillance via much-improved camera technology. Everyone should be able to catch it this time around (http://bit.ly/u1eN8h).

Three boys from Georgetown, Texas, prefer fast-paced rockets to slow-paced pitch. So they entered, and won, the 2013 International Rocketry Challenge, part of the Paris Air Show, in June. 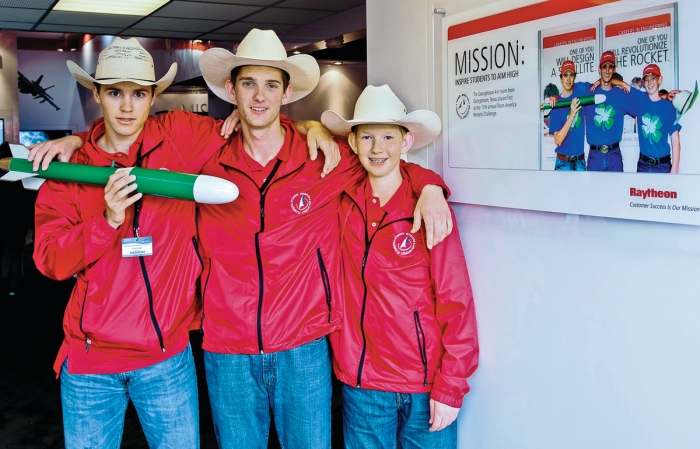 Credit: Amy Janecka
Rocket enthusiasts: Daniel Kelton (from left) and Matthew and Mark Janecka had the best rocket at the Paris Air Show.

“The target height the rocket had to reach was 750 feet, and it had to bring a raw egg back to Earth, unbroken, in 48 to 50 seconds,” says Mark Janecka, a member of the team. His team’s rocket launched 703 feet and returned to Earth in 49 seconds with its cargo egg-xactly in the same condition it left.

This is the third time that Mark, his brother Matthew, and fellow high schooler Daniel Kelton have entered a rocket competition. “What I think gave us the edge was how well we work together as a team and all the data we collected on the test flights,” Matthew says.

For all three competitions, the boys have worked with mentor James Duffy, a member of the National Association of Rocketry.

One goal of the International Rocketry Challenge is to inspire students to explore the field of science, technology, engineering, and mathematics. In this case, it did the trick: All three boys want to pursue college STEM degrees.

They plan to enter another rocketry competition next year. “But of course we’ll have to build a new rocket due to different rules,” Kelton says. The Newscripts gang wonders what will happen first: the ninth pitch drop or another victory for the Texas team.