A New Way To Split Water 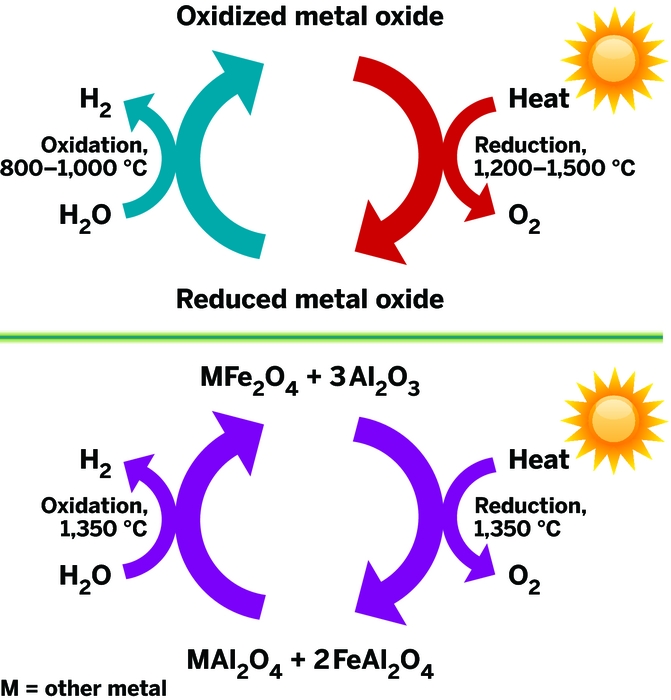 To meet future energy needs, scientists would like to find sustainable ways to generate hydrogen for use in fuel cells and to make liquid fuels. As an alternative to other H2 sources, such as processing of biomass and electrolysis of water, scientists are developing a thermal water-splitting method that would use heat from solar arrays and metal oxide catalysts. But the classic thermal approach has required repetitive heating and cooling, which wastes energy.

Charles B. Musgrave, Alan W. Weimer, and coworkers at the University of Colorado, Boulder, have now sidestepped the temperature-cycling problem by demonstrating the first constant-temperature version of the technique (Science 2013, DOI: 10.1126/science.1239454).

In temperature-swing catalytic water splitting, a metal oxide catalyst is reduced at high temperature, 1,200 to 1,500 °C, releasing O2; the reduced metal oxide is then oxidized in the presence of water at a temperature about 400 °C cooler, yielding H2 and regenerating the original catalyst. The cycle is then repeated.

In the new isothermal approach, metal oxide catalysts are reduced at 1,350 °C, releasing O2; the system is then oxidized in the presence of water at the same temperature, producing H2 and regenerating the catalysts. The process is repeated. Isothermal was more efficient than temperature-swing splitting in the new study, but further studies are needed.

The new technique “has a good chance to outperform” temperature-swing splitting in practice, says solar hydrogen-generation expert Martin Roeb of the Institute of Solar Research, in Cologne, Germany. Materials science and chemical engineering professor Sossina M. Haile of Caltech says potential advantages of isothermal cycling include “design simplification and reduced mechanical stresses. What is remarkable in this work is that there is a dramatic enhancement in hydrogen production” compared with temperature-swing splitting.

Zhaolin Wang, a hydrogen-generation expert at the University of Ontario, says eliminating temperature swings could lead to longer catalyst life, simpler operation, and increased H2 production. Wang notes a possible explosion hazard from simultaneous H2 and O2 formation caused by inadvertent catalyst mixing, but Weimer believes this can be prevented.

Liquid fuels made with H2 from solar water splitting would be more expensive than today’s fossil fuels, so the thermal approaches anticipate different fuel economics. But the new study is “ground-breaking and of fundamental significance,” Steinfeld says, “because it experimentally demonstrates the feasibility of operating thermochemical redox cycles under isothermal conditions.”