Women chemists at the University of Edinburgh have had remarkable success, and in a new video and book the Rosalind Franklin Award winner explains why 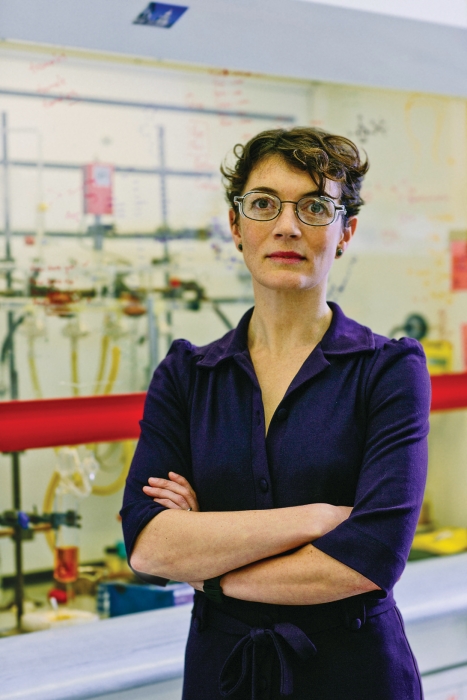 From 1870 street riots over women’s education rights to the first woman president of the Royal Society of Chemistry, women chemists from the University of Edinburgh have a long history of showing their mettle. Edinburgh’s Polly L. Arnold has highlighted these women’s experiences in a video and booklet project called “A Chemical Imbalance,” which officially launched on Aug. 5 (www.chemicalimbalance.co.uk).

“The video will make you laugh, and then you’ll be embarrassed by it,” Arnold says.

In a nutshell, “A Chemical Imbalance” is an investigation of how Edinburgh’s School of Chemistry has been successful in striving to reach gender parity. Half of Edinburgh’s named professorships are held by women, and one-third of senior faculty members are women.

“We can’t completely eliminate the inherent biases and stereotypes that we all harbor,” Arnold says. “But we can work to recognize and reduce them as much as possible. Changing our culture to be more supportive of women makes a difference—if we create an environment that’s good for women, it’s good for everybody. A lot of it is about just being nice to each other. Surely we are capable of that.”

Arnold, the Crum Brown Chair of Chemistry, latched onto the idea of spreading the message about the women of Edinburgh after she received the Royal Society’s 2012 Rosalind Franklin Award. The award, given annually to recognize excellence in research, includes a medal, a roughly $50,000 grant, and a public lecture.

As an inorganic chemist, Arnold focuses her research on the study of new metal catalysts for C–H bond activation and for catalytic functionalization and polymerization of CO and CO2. When she delivered her Franklin Award lecture, Arnold spoke about her group’s work on uranium oxides that is providing insight on how to best deal with nuclear waste.

The Franklin Award recipient is expected to spend the grant on implementing a project to raise the profile of women in science, technology, engineering, and mathematics. That’s how Arnold came across the details of the riots in Edinburgh.

“It is a compelling story of women trying to get an education in science,” Arnold explains. “Edinburgh was a leading center of the Enlightenment, and the university was unusual in that it had not been set up by the church. It had what was considered the best medical school in the English-speaking world—there was no problem with people cutting up dead bodies.”

In 1870, chemistry wasn’t yet a separate discipline but was instead taught in the medical school, she notes. A half-dozen chemistry students, led by Sophia Jex-Blake, wanted to get medical degrees. But the university’s administrators, including organic chemistry professor Alexander Crum Brown, denied them the opportunity. They made up excuses about not being able to give the necessary lectures to take the medical board exams; the classes were still segregated by gender. The women protested in the streets, and words with faculty and bystanders turned contentious. “Their efforts ended up in a riot, with people throwing vegetables at them just because they wanted to sit an exam,” Arnold says.

“There’s a wonderful symmetry to the story,” she continues. “Crum Brown was refusing to put on extra lectures for the women, and then eventually Jex-Blake got her medical degree in Switzerland and came back to Edinburgh to start a medical college for women. Now more than 100 years later, I have Crum Brown’s named chair and I am telling her story.”

Among other famous women of Edinburgh are Chrissie Miller, who first isolated pure phosphorus trioxide in 1928; current Scottish Parliament member Elaine Murray; and Lesley Yellowlees, who is serving as president of the U.K.’s Royal Society of Chemistry, the first woman to do so.

Arnold believes the video and book project has helped her uncover Edinburgh’s recipe for success. Departments need to monitor hiring, promotion, salary, and tenure statistics, she says, which will help work out if unconscious biases are impacting decision making.

“Mentoring is another key element of success,” Arnold says. “We need strong mentors who know how to be supportive and encourage people of either sex to come through the ranks and be the best they can be, not letting them quit the race if they fall at the first hurdle.” It’s not just students, postdocs, and junior faculty who need mentoring, she notes. Hiring and tenure committee members—men and women both—need guidance too. But mentoring can be hard, she adds. It takes extra time in an already busy schedule.

“In addition, we need to create a workplace that is as flexible and supportive as possible so people can balance their careers with their other needs,” Arnold says. Surveys consistently reveal that the main reason women opt to leave science for an alternative career or to start a family and not return is workplace climate—that is, the lack of flexibility and support.

Finally, Arnold advocates that men and women need to reclaim the meaning of feminism. She argues that feminism should no longer be a tainted word associated with radical social change—the battle of the sexes—but rather a word that stands for wanting everyone to be able to do exactly what they are capable of doing.

“We should want to get the best out of everybody,” Arnold says. “There shouldn’t be anyone or anything to stop you.”