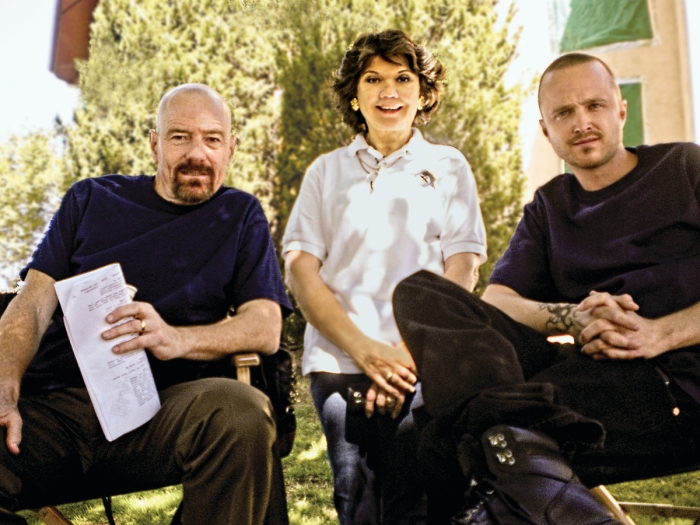 In 2008, C&EN reported on the first season of the television series “Breaking Bad,” in which high school chemistry teacher Walter White (Bryan Cranston) is diagnosed with lung cancer and turns to making methamphetamine to provide for his family. The show’s budget didn’t allow for a paid chemistry adviser, so much of the science information was researched on the Internet. Series creator, writer, and producer Vince Gilligan told C&EN that he would welcome input from chemists.

The request intrigued Donna J. Nelson, an organic chemistry professor at the University of Oklahoma who studies alkene addition and carbon nanotube reactions. But Nelson hadn’t seen the show, and she was concerned that it glorified drug abuse. After watching it, however, she was reassured.

“If anything, the way Vince portrays this is to make the lifestyle appear horrible—I think it will make kids shy away,” Nelson says. “I don’t think Vince is trying to set up Walt as a role model for chemists,” she adds.

Nelson proceeded to volunteer to help Gilligan and his colleagues with the show. Gilligan accepted.

Her first interaction with the show’s writers came on a 2008 trip to California, during which she stopped in Burbank to meet with Gilligan and other “Breaking Bad” writers. They peppered her with questions about what would make a person go into science, become an organic chemist, leave a research position to become a high school teacher, and so on. “They were trying to develop Walt’s character, but none of them had any science background,” Nelson says.

Going forward, Nelson’s contribution to the show continued to center on White’s character as a chemist, what he says as a chemist, and his interactions with Jesse Pinkman (Aaron Paul), White’s former student who becomes his junior partner in meth synthesis.

“I did a lot of answering questions and quite a bit of checking scripts,” she says. Nelson advised how teacher White might talk to Pinkman or, later, how two lab mates might talk to each other. The show turned to Drug Enforcement Administration sources for illicit meth lab setups. “Vince was really interested in getting every detail correct,” Nelson says. But he wanted to do it without giving viewers meth recipes, she notes.

At some points during the show’s production, convenience won out over scientific rigor. When Nelson was asked to calculate how much meth could be synthesized from 30 gal of a methylamine solution, she needed to know which reducing agent White would use. She gave the show several choices. The writers went with an aluminum-mercury amalgam, because they thought it would be easiest for the actors to say.

“Chemists normally choose a reducing agent based on safety, cost, or yield, but never based on the name,” Nelson says. “I thought that was hilarious.” The yield? About 280 lb.

Nelson’s favorite scene is one that comes at the start of the show’s fourth season, when White fears he is about to be killed by Gustavo Fring (Giancarlo Esposito), meth kingpin of the Southwest. One of Fring’s deputies thinks he can follow White’s meth synthesis.

“Really?” White asks emphatically, desperate to prove his value. “Oh, so please, tell me, catalytic hydrogenation, is it protic or aprotic? Because I forget. And if our reduction is not stereospecific, then how can our product be enantiomerically pure?”

“They sent that script by me, and I cleaned it up and made it really strong and absolutely correct,” Nelson says. But she likes it not because she helped write it but because it puts chemistry front and center. “Walt is saying, ‘I am important to you. I am essential to this, because I have this knowledge of chemistry,’ ” Nelson says.

Aside from the visit to Burbank, Nelson got to visit the set in Albuquerque a few times. Once, she was filmed for a cameo appearance, dressed in a nurse’s scrubs for a scene in a nursing home.

“What surprised me was how early you have to get into the proper clothes, then you wind up sitting around and waiting all day,” she says. She had dressed early in the morning, and they finally shot her scene at about 4 PM. Unfortunately, she didn’t make the final cut.

The final episode of the series airs on Sept. 29. Nelson says she doesn’t know how the show will end. Will she tune in to watch? “You better believe it!”

Education
New international students cannot enter US for online-only programs
Education
Chemistry-style fun and games
Undergraduate Education
Block plan compresses one class into a few weeks for deeper learning
Share X
To send an e-mail to multiple recipients, separate e-mail addresses with a comma, semicolon, or both.
Title: C&EN Talks With Donna Nelson
Author: Jyllian Kemsley
Chemical & Engineering News will not share your email address with any other person or company.