[+]Enlarge
Credit: Nature
The stereochemical assignment of the central methyl group in miyakosyne A is incorrect in this crystallographically generated image. 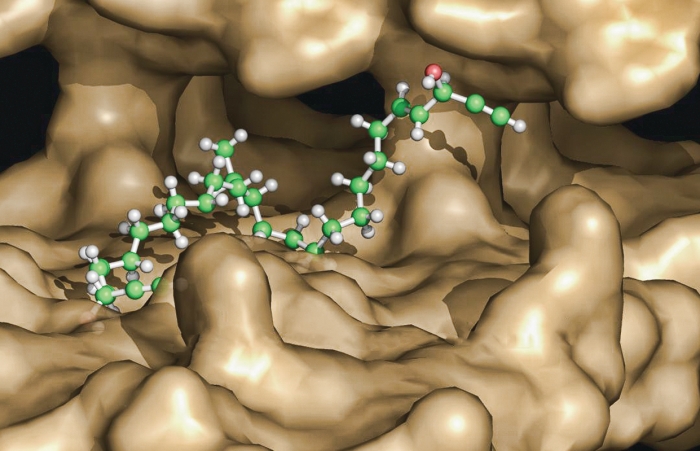 Credit: Nature
The stereochemical assignment of the central methyl group in miyakosyne A is incorrect in this crystallographically generated image.

Chemists are withdrawing some of their original claims about a small molecule structural determination method published earlier this year (C&EN, April 1, page 9).

When the method originally appeared it seemed to offer chemists a way to determine structure and stereochemistry of otherwise hard-to-crystallize compounds.

But now doubts have emerged. In a correction that recently appeared in Nature (DOI: 10.1038/nature12527), a team led by Makoto Fujita, of Japan’s University of Tokyo, reports that its technique was not able to unambiguously determine the stereochemistry of the natural product miyakosyne A, as originally claimed.

Miyakosyne A contains a long carbon chain with a central methyl group. Because the molecule’s structure makes it virtually impossible to crystallize, the stereochemistry of the methyl group had been something of a mystery. Fujita’s team thought it had solved that mystery with a new structural determination technique that uses porous metal frameworks with large cavities as so-called crystalline sponges. These sponges soak up guest molecules within their voids, putting the molecules in an ordered array that can be studied via X-ray crystallography.

Now Fujita and coworkers say that the stereochemical assignment they made for miyakosyne A’s central methyl group is incorrect. The mistake was noted when synthetic studies by University of Tokyo’s Shigeki Matsunaga (a coauthor on the original report) and Kenji Mori determined the methyl’s stereochemistry was opposite to what had originally been determined from the crystal-free crystallization method, Fujita tells C&EN.

Fujita says that the technique remains useful for structural determination and can still be used to determine both atom connectivity and stereochemistry, as was done with the antiparasite drug santonin. The correction shows that it does not work for every molecule. “we can only tentatively and not unambiguously identify all of the stereochemistry of miyakosyne A on the basis of the data included in the original paper,” the correction itself states.

The incorrect assignment of miyakosyne A was a result of insufficient data quality, Fujita says, a problem not encountered when crystal-free crystallography was used to determine the connectivity and absolute configuration of santonin. “By far the most impressive feature of the work was the miyakosyne A structure,” comments Jon Clardy, a natural products expert at Harvard Medical School. “Since that was wrong, the paper’s significance is greatly diminished. Optimistically, it means that it’s worth looking for alternative sponge hosts that would make the technique useful.”